Not many investors in 2020 give much consideration to the days of European and Asian communism.

But maybe they should.

The map below shows the reach of the USSR in the postwar years. Stalin negotiated well.

One legacy the Cold War had on our industry was to leave us with a laundry list of state-owned enterprises (SOEs) that litter indexes such as MSCI Emerging Markets. Placing profits below political consideration, these bureaucratic bloats-mostly incorporated before the fall of the Berlin Wall and still comprising one-quarter of that Index-often drag performance and add risk. So it is with geopolitical hot potatoes. 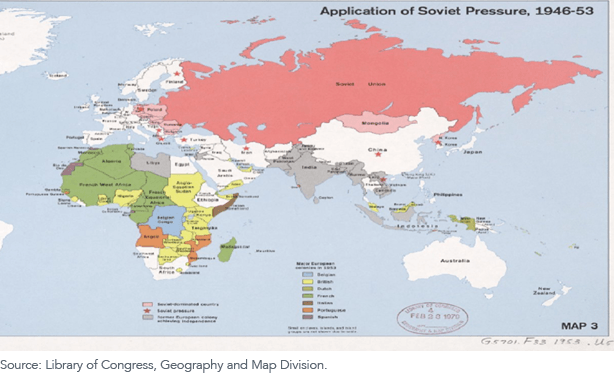 When the World Bank's Antoine van Agtmael coined the term "emerging markets" in 1981, it was probably assumed that by 2020 many of them would have, ahem, emerged. But most are still stuck in the category. Some, like South Korea and Poland, are in that purgatory where some indexers have graduated them to "developed" status but other indexers still declare them emerging. Others, like Israel, built up a tech sector and graduated. And some unfortunates went the other way: "submerging." Venezuela, for example.

China is now the elephant in the room.

None of us had equities in that country 40 years ago. It was not even "a thing."

Though Deng Xiaoping started to open the country shortly after Mao's 1976 death, let's get real: it could only be engaged by Western capital in the last quarter century or so, and in a heavily restricted manner at that. For that matter, everywhere else with a red star on the Cold War map above was basically uninvestable, too. Even after the USSR finally crumbled in 1991, Eastern Europe remained a mess throughout the 1990s.

With 25% of the MSCI Emerging Markets Index still populated by the Cold War's leftover SOEs, many investors have significant capital tied up in companies that incorporated under Mao Tse-tung and Joseph Stalin.

Figure 2 shows the founding years of the 10 largest underweights in the WisdomTree Emerging Markets ex-State-Owned Enterprises Index, which kicks these companies out.

You thought you were in emerging markets to capture 21st century growth, right?

Look at China Construction Bank, incorporated in 1954, 18 years before Richard Nixon visited the country. How about Sberbank? That one makes the Chinese banking monoliths look like fintech start-ups. Forget Stalin or Khrushchev; this Russian megabank came into being during Tsar Nicholas I's reign.

Figure 3 shows the over-weights in our Index. Of the six that are Chinese, Mao never met them. The median founding year for the list is 1994.

When we look at the emerging world, there are hundreds of listed SOEs that make their way into indexes such as MSCI Emerging Markets. If we could write their real mission statements, is it "to further the interests of entrenched politicians?" I think it is.

WisdomTree has three emerging market ETFs that are designed to stay away from SOEs.

Because really, why own them if you do not have to?

To see their performance, please see their factsheets here for XSOE, here for CXSE and here for IXSE.

Important Risks Related to this Article

Jeff Weniger, CFA serves as Director, Asset Allocation at WisdomTree. Jeff has a background in fundamental, economic and behavioral analysis for strategic and tactical asset allocation. Prior to joining WisdomTree, he was Director, Senior Strategist with BMO from 2006 to 2017, serving on the Asset Allocation Committee and co-managing the firm's ETF model portfolios. Jeff has a B.S. in Finance from the University of Florida and an MBA from Notre Dame. He is a CFA charter holder and an active member of the CFA Society of Chicago and the CFA Institute since 2006. He has appeared in various financial publications such as Barron's and the Wall Street Journal and makes regular appearances on Canada's Business News Network (BNN) and Wharton Business Radio.

Editor's Note: The summary bullets for this article were chosen by Seeking Alpha editors.