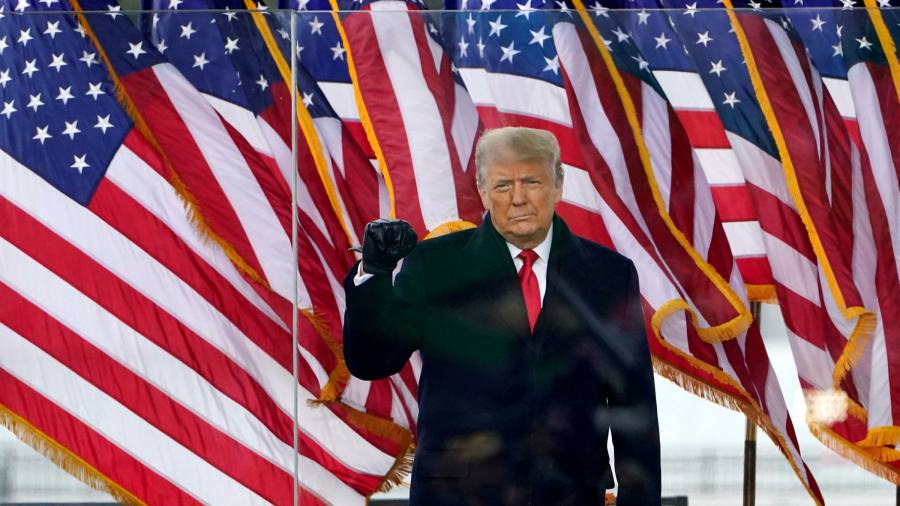 His personal lawyer, Rudy Giuliani, also called on the crowd to conduct “trial by combat”.

A mob made up of “Make America Great Again” protesters, Proud Boys and other far-right groups took them at their word. What followed was desecration. Four years after Mr Trump warned of “American carnage” in his inaugural address, he got what he wanted. The scenes of insurrectionists, some of them armed, ransacking Congress will go down in infamy in American democracy.

Nobody should feign surprise. Mr Trump has been vowing to “take back control” since before he took office. During the build-up to last year’s presidential election, Mr Trump repeatedly predicted that it would be the most corrupt in America’s history. Since losing, he has been broadcasting that falsehood ever more loudly.

He said it again on Wednesday afternoon — in the Twitter video he released urging his supporters to pack up and go home. (Twitter later locked the president out of his account and insisted he delete the post.) On Twitter and elsewhere, Mr Trump has fuelled the QAnon conspiracy theory that Washington is controlled by a deep state of paedophiles. Now a large minority of Americans believe the US election was fraudulent. No wonder some were ready to storm Congress just as it was meeting to certify Joe Biden’s victory. The only surprise is that there were not more.

The most pressing question now is what Mr Trump might try to do in his remaining two weeks in office. Senior military in the Pentagon have discussed at length how they would respond if Mr Trump tried to declare martial law, using the 1807 Insurrection Act. Some around Mr Trump, including Michael Flynn, his former national security adviser, have been urging him to invoke it. After supporters stormed the Capitol, Ivanka Trump, the president’s daughter, called them “American patriots” in a tweet she later deleted.

The concern about what Mr Trump can still attempt to do is not academic. In spite of what happened on Wednesday, Mr Trump still commands the personal loyalty of many people in uniform.

One reason why the mob so easily breached Congress is because many of the Capitol Hill police officers were clearly in sympathy. Some even took selfies with the insurrectionists inside the Capitol building. The contrast with how Black Lives Matter protesters were treated last June when law enforcement violently cleared Lafayette Square to make way for Mr Trump’s photo-op was glaring. Had African-American protesters tried to storm Capitol Hill, or the White House, there can be little doubt that bullets would have been used.

The next question is how many Republicans will continue to support Mr Trump’s “stolen election” narrative.

Shortly before Congress was invaded, Mitch McConnell, the outgoing Senate majority leader, had repudiated Mr Trump’s attempts to declare the election a fraud. Critics will say Mr McConnell’s surprisingly forceful address was a day late and a dollar short. But he was able to state reality forcefully when it mattered. The same cannot be said of Ted Cruz, the Texan senator, Josh Hawley, the Missouri senator, and more than 100 of their colleagues in both houses. Their theatrical protest against the election certification was interrupted by a real-life assault on the building in which they were speaking.

In his speech, Mr Cruz said the fact that so many Americans believed the election was a fraud posed “a profound threat to our country”. Here was a classic case of the arsonist posing as a firefighter. Fifteen minutes later, the session was abruptly halted.

As senators were being hurried to safety by Capitol Hill police, Mitt Romney, the Utah senator, who has been a rare Republican voice warning of Mr Trump’s authoritarianism, yelled to GOP colleagues: “This is what you’ve gotten.” He was right.

Agree with him or not, Mr Romney speaks for the party that used to care about the US constitution, law and order, America’s standing in the world, and civility in politics. Those who have thrown their lot in with Mr Trump are now tied to his mob. They may not have expected events to turn quite so dark. But that was the gamble they took. As John F Kennedy said in his own inaugural address: “Those who foolishly sought power by riding the back of the tiger ended up inside.”