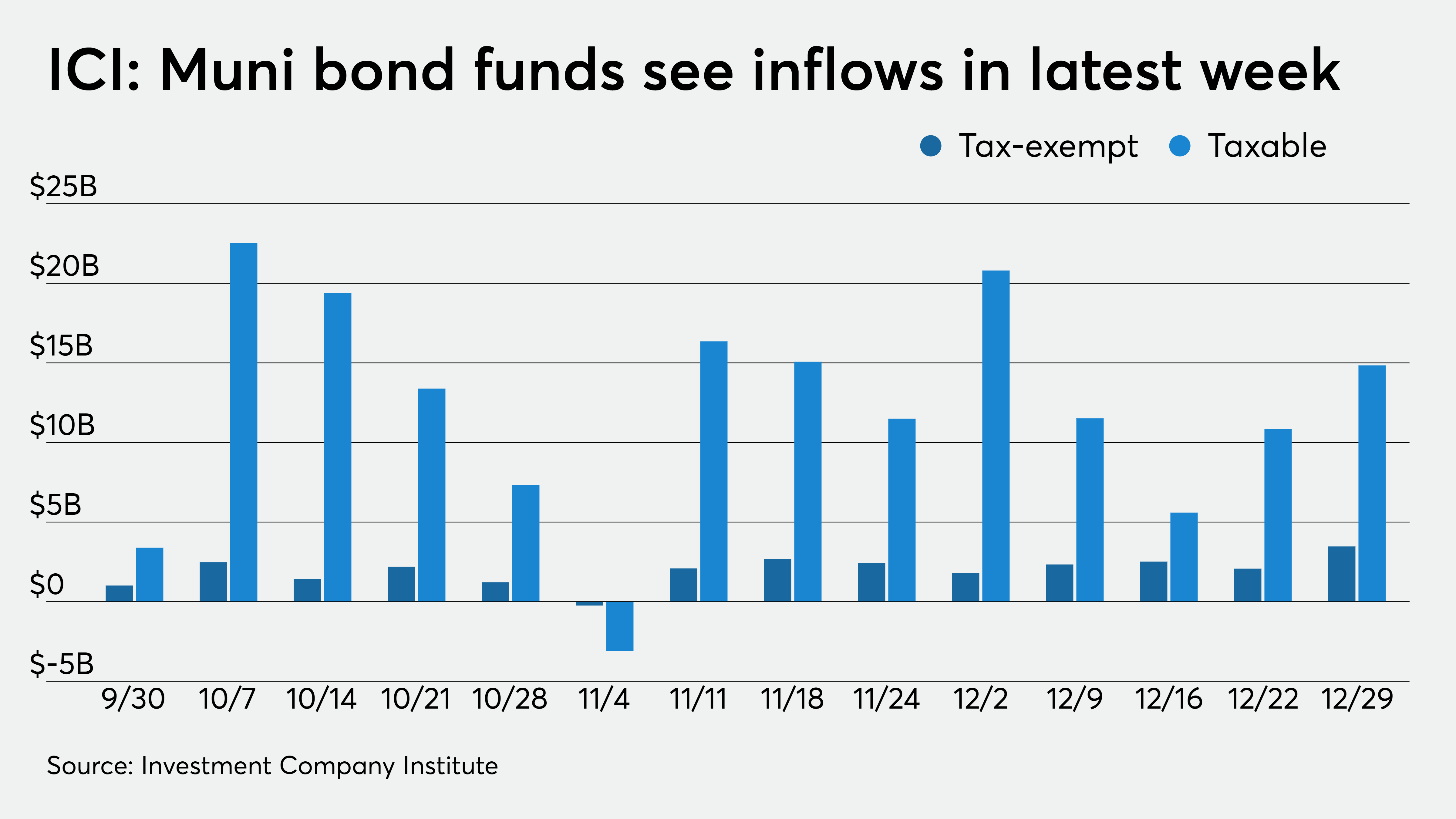 On a day when a pro-Trump mob breached the U.S. Capitol and overtook the House and Senate chambers, markets were still digesting what was transpiring in Washington. As of press time, the National Guard was headed to the Capitol that was still occupied.

Municipal bond yields rose one to two basis points on triple-A scales outside of four years out of the gates and largely ignored a near 10-basis point overnight sell-off in U.S. Treasuries, suggesting the market may see a lagging correction in coming days.

In the longer-term, munis may be still see rates fall further once the dust settles in that broader tax increases could be on the horizon with a potential Democratic sweep in Washington after their candidates in Georgia appeared to win both seats in Tuesday’s runoff election. Much of course depends on what transpires in Washington over the coming days.

Solid technical factors that drove performance in the municipal market in 2020 are continuing to keep the tax-exempt market strong in the first of 2021, according to municipal sources.

With supply still tight and the Treasury market down, municipal activity focused on decent trading volume on Wednesday, according to a New York trader.

“There are sellers and some going away trades,” he said. “Municipal yields are down a few basis points but given the severity of the Treasury move, munis are obviously outperforming and it’s a lot to do with supply and a lot to do with the uncertainty with the tax outlook going forward,” the trader added.

He described the market as active and orderly, displaying “resilience,” with some investors remaining on the sidelines speculating as they await more supply later in the week and the conclusion of the Georgia election.

“Despite Treasuries, the market is putting in a pretty decent performance today,” the trader explained, predicting that municipals might be down two to three basis points on the day, as municipal to Treasury ratios remain at all-time highs hovering at 76% in 10 years.

“It’s still very quiet,” on both the investor and issuer sides of the market, John Mousseau, president and director of fixed income at Cumberland Advisors said.

The deal’s five-year bonds in 2026 with a 5% coupon were priced to yield 0.19%, which compared to the triple-A benchmark scale which yielded 0.21% on Tuesday.

He said there should be much more market clarity later in the week with the announcement of the results of the Georgia elections.

“Folks are waiting on Senate races and electoral college shenanigans — if any,” he explained.

Others agreed, saying municipals appear to have a strong entry into the first quarter.

“Munis are well-poised to show strength during the opening days and weeks of 2021,” said Jeff Lipton, managing director and head of municipal credit and market strategy and municipal capital markets at Oppenheimer & Co. Inc.

“The market is tentative ahead of the Georgia runoffs and the disrupted political backdrop adds to investor caution,” Lipton added. “As clarity emerges, stakeholders can formulate a near-term investment thesis based upon perceived expectations of what may come out of Washington.”

The New York trader said he expects the market to settle in by next week. “But,” he said, “the jury is still out on if rates back up and taxes go down, and if we see a bear steepener, and on the flip side if taxes go up, then munis become more attractive.”

Inflation remains below the Fed’s 2% target, with little change to long-term expectations. Participants see inflation rising to 2% “as the economic expansion continued and resource utilization remained high.” But global economic weakness is a downside risk.

Some members were less certain that inflation would reach 2% “promptly,” since it failed to reach that level despite rising resource utilization.

Participants see risks to the economic outlook “as tilted somewhat to the downside.”

The sales include $2.32 billion of new money and $4.6 billion of refundings and reofferings in a mixture of tax-exempt, taxable and variable-rate debt.

In January, $1.9 billion is scheduled to be sold, of which $717 million is for new money and $1.18 billion for refunding and reoffering purposes.

In February, $3.34 billion is slated for sale, of which $1.6 billion is for new money and $1.73 billion for refunding and reoffering purposes.

In March, $1.68 billion is set for sale, all of which is for refunding purposes.

The anticipated deals compare to past planned sales of $6.28 billion in the fourth quarter of 2020 and $5.39 billion during the first quarter of 2020.

In the previous week, muni funds saw a revised inflow of $2.076 billion, originally reported as a $2.086 billion inflow, ICI said.

ICI said the total combined estimated inflows from all long-term mutual funds and ETFs were $17.554 billion after a revised inflow of $8.554 billion in the previous week, originally reported as an $8.568 billion inflow.

This was the first drop in jobs since April. “The job losses were primarily concentrated in retail and leisure and hospitality,” according to Ahu Yildirmaz, vice president and co-head of the ADP Research Institute.

Economists polled by IFR Markets expected 140,000 jobs to be added.

The surprise decline comes ahead of Friday’s employment report and on the heels of a rise in coronavirus cases, which has led to some new business shutdowns. Economists expect the employment report to show 100,000 new jobs, and 105,000 added in the private sector.

The ADP report is not an indicator of the jobs report, economists say.

But despite that and expectations for a gain the Payden & Rygel economics team said “we wouldn’t be surprised to see a modest negative print for the month.”

The rise in COVID cases led to shutdowns, so “December was a rough month for the U.S. labor market,” they noted. “Although a negative print would be disappointing for the nearly 10 million Americans currently unemployed, it doesn’t mean the economy is falling back into a recession or that financial markets must falter.”

It’s not unusual for a negative month following a recession, and while a full labor recovery “remains a long way off,” one bad month “doesn’t spell doom,” they said.

Separately, factory orders rose more than expected in November, climbing 1.0% after an upwardly revised 1.3% increase in October, first reported as a 1.0% gain. Economists projected a 0.6% climb.

Excluding transportation, orders rose 0.8% after a 1.3% increase in October.

Christine Albano contributed to this report.