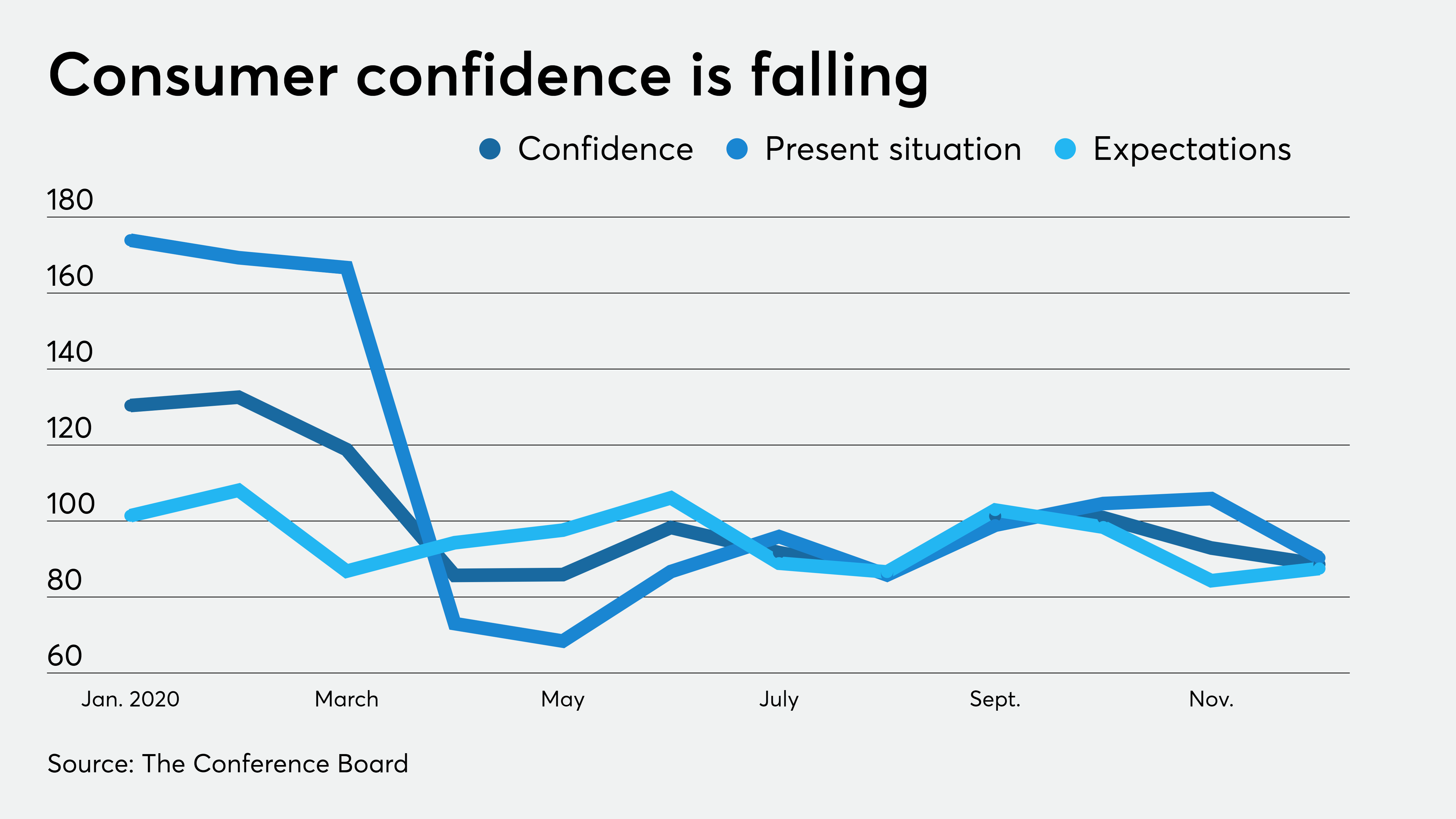 Consumer confidence unexpectedly plunged in December, although the expectations index improved, while the rest of Tuesday’s economic data came in around expectations.

The consumer confidence index fell in December to 88.6 from a downwardly revised 92.9 in November, first reported as 96.1, The Conference Board reported Tuesday.

Economists polled by IFR Markets expected the confidence index to rise to 97.0.

“The resurgence of COVID-19 remains a drag on confidence,” according to Lynn Franco, senior director of economic indicators at The Conference Board. “As a result, consumers’ vacation intentions, which had notably improved in October, have retreated. On the flip side, as consumers continue to hunker down at home, intentions to purchase appliances have risen. Overall, it appears that growth has weakened further in Q4, and consumers do not foresee the economy gaining any significant momentum in early 2021.”

“It is useful to know what people are doing, not what or how they are feeling, when it comes to spending habits.”

Gross domestic product
The final read of third quarter GDP showed a 33.4% rise on a seasonally adjusted annual basis, slightly up from the advanced reading which showed a surge of 33.1%, the Commerce Department said Tuesday.

“Thanks to monetary and fiscal stimulus, we are now in-line for a V shaped recovery,” said Sam Dunlap, chief investment officer, public strategies for Angel Oak Capital Advisors. “We are looking at a negative 4% to 5% decline in GDP for this year, which is a positive outcome in a negative environment.”

With stimulus in pace, the Fed committed to near-zero rates until 2023, and the vaccine beginning to be administered, GDP gains should be “robust” in 2021, he said.

Interactive’s Sosnick said, despite the rise, GDP is “still roughly 9% below we were started.”

If core PCE continues to rise at the 3.4% pace it did in the third quarter, he said, “it would be a crimp for Fed activity but one quarter does not make a trend. If that is the Fed’s preferred measure, perhaps we are seeing some inflation now but now enough for them to do anything yet.”

Economists expected a rate of 6.70 million.

“Home sales in November took a marginal step back, but sales for all of 2020 are already on pace to surpass last year’s levels,” said NAR Chief Economist Lawrence Yun. “Given the COVID-19 pandemic, it’s amazing that the housing sector is outperforming expectations.”

Future expectations for business conditions in the district gained to 10 from 4 last month, while revenues rebounded to 11 from negative 2 and demand climbed to 14 from 12..

Manufacturing activity in the district showed “signs of improvement” in the month, the Richmond Fed said, as the manufacturing index gained to 19 from 15 last month. Shipments slipped to 12 from 20 and volume of orders rose to 24 from 12.

Philadelphia Fed nonmanufacturing
The Philadelphia region’s services sector showed “continued moderation in business activity” in December, as the regional general business activity index fell to negative to 26.8 from negative 15.9 a month ago, while at the firm level, the index climbed to 5.6 from 5.3 the prior month, according to the Federal Reserve Bank of Philadelphia.