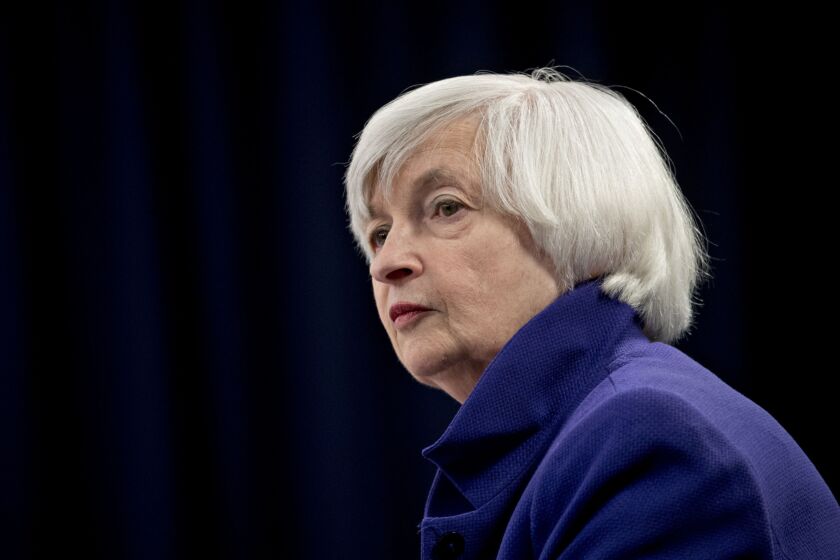 Biden tapped the former Federal Reserve chairwoman for the Treasury post Monday, though she and other cabinet picks won’t be formally considered by the Senate until January. If confirmed she would be the first woman in the job, and take office at a time of unusual urgency for municipal issuers.

“Normally municipal finance would be a second or third-tier issue for the secretary of treasury but the world has changed drastically,” said Chuck Samuels, counsel to the National Association of Health and Educational Facilities Finance Authorities. “Between the pandemic, the deep recession, the need for infrastructure and the precarious position of many state and local governments and nonprofits we would expect a much more proactive treasury secretary on municipal finance type issues.”

Her stance on the municipal market could be a mixed bag, Samuels said, saying she has been in favor of directly supporting states and local governments but opposed Federal Reserve loan programs during her Fed chairmanship from 2014-2018. According to multiple media reports, President Donald Trump considered keeping her on but ultimately nominated current Fed Chair Jerome Powell.

Over the summer, Yellen told the Select Subcommittee on the Coronavirus Crisis that one of Congress’ priorities should be providing support to municipalities.

“Congress should provide substantial support to state and local governments,” Yellen said in July. “The enormous loss of revenue from the recession together with the new responsibilities imposed by the response to the pandemic has put their budgets deeply in the red.”

“But now, we’re in a different place,” Samuels said. “We’re in an economic crisis.”

“(Treasury Secretary Steven) Mnuchin has been very involved in public finance issues, so there’s every reason to think that that will continue with Secretary Yellen,” Samuels added.

As for Biden’s infrastructure agenda, Yellen’s expertise in employment and labor economics could be impactful.

“Because of her background, something infrastructure-related might be one of the strategies that she argues in support of in order to help repair the labor market,” Kozlik said.

That doevetails with Biden’s Build Back Better plan, which calls for extensive infrastructure investment. Along with revitalizing infrastructure, Biden also wants to create more middle-class jobs.

Applications for seasonally adjusted unemployment benefits rose to 742,000 as of Nov. 19, up 31,000 from the previous week’s claims, according to the Department of Labor.

“Biden’s proposal will make sure that national infrastructure investments create millions of middle-class jobs, benefiting union and non-union workers across industries,” according to his plan.

Yellen is likely to be confirmed by the Senate, since she is considered a non-controversial pick compared to other potential candidates such as Sen. Elizabeth Warren, D-Mass.

One question will be how her past role as Fed chair lends itself to a more political position. The Fed is an independent central bank concerned with monetary policy, and is not part of the president’s administration.

“She’s always answered as either an academic from the economic bureau sector or from the Fed which is apolitical,” said Brian Battle, director of transactions at Performance Trust Capital Partners. “So now she has a political job, and we’ll see what her answers are going to be.”

Yellen’s role as treasury secretary in a Biden administration means that she will be in good position to support his infrastructure plan.

“She could have a lot of influence to say Treasury is capable of supporting an infrastructure bill in the way that we did last time when we did Build America out of the ARRA legislation in 2009,” Battle said.

In 2009, Build America Bonds were included in the American Recovery and Reinvestment Act. Those bonds offered issuers a 35% subsidy on the interest owed to investors, but authority to issue them ended in 2010.

Yellen could also have a change of heart on certain municipal lending programs as treasury secretary.

Though the Fed’s Municipal Liquidity Facility is set to end Dec. 31, after current Treasury Secretary Steve Mnuchin told the Fed to reimburse the unused funds backing the program, Yellen could decide to support the MLF again. However, that would require the support of both Biden and the and Chair Powell.

“I would suspect that she would be supportive of having all of the emergency facilities in place just in case they’re needed,” Battle said.

However, Yellen has been against the Fed intervening to provide financial assistance to municipalities. During a 2015 Congressional testimony, Yellen said she continued to believe that it’s best for the Fed to not step in as a creditor to states or municipalities.