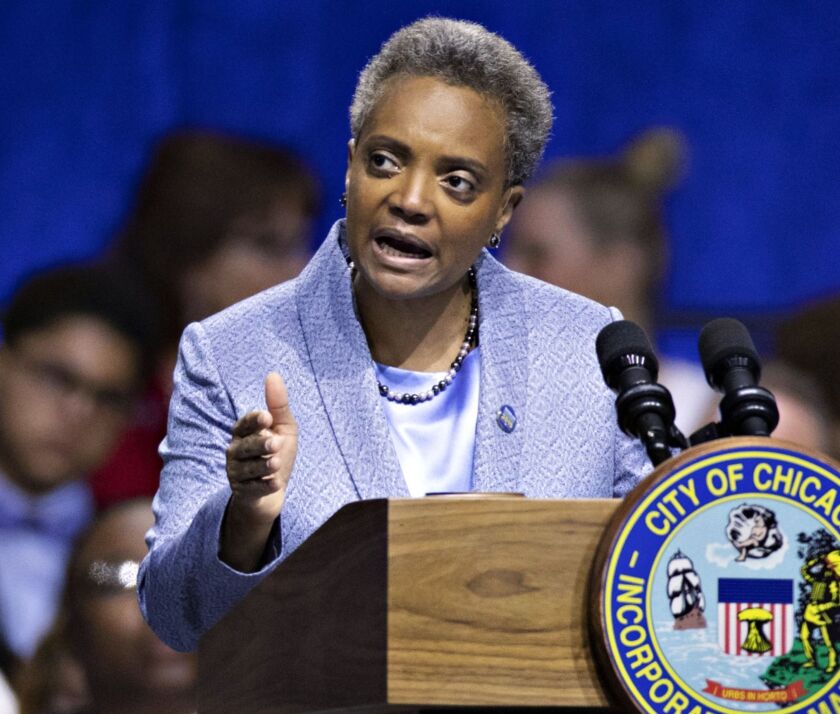 A divided Chicago City Council signed off on Mayor Lori Lightfoot’s 2021 budget that closes a record $1.2 billion gap with scoop-and-toss debt restructuring, a property tax hike and mix of other structural and one-time maneuvers as the city seeks to navigate the COVID-19 pandemic’s fiscal wounds.

The council voted 29-21 in favor of the $12.8 billion budget that includes a $4 billion corporate fund, 28-22 for the tax package and 41-8 on $1.6 billion of borrowing that includes new money bonding to support a proposed $3.7 billion capital plan that helped win over some council members opposed to the property tax hike.

“Today we heard a lot of eloquence and passion both for and against the various items in the budget,” Lightfoot said after the Tuesday votes. “This was a very difficult budget, probably the most challenging in the history of our city.”

An additional $430 million of bonding authority gives the city room should it opt to tender some debt or if additional refunding candidates are available, bringing the total authorization to $3.9 billion. The city’s finance team defends the scoop-and-toss as preferable to using reserves, as the city attempts to preserve its bond ratings and future flexibility.

While the restructuring will add $1 billion to future debt service costs by pushing the city’s debt service schedule out by three years, the traditional refunding piece will generate sufficient savings to blunt the present value penalty so the overall transaction generates about $30 million of present value savings.

By and large, the Chicago Civic Federation watchdog group supported the budget for showing restraint on tapping the property tax and also reducing personnel expenses, but it urged the council to scrutinize the borrowing. “Our support remains qualified because, disappointingly, the public has not been provided with nearly enough detail to independently evaluate the enormous proposed debt refinancing,” said federation President Laurence Msall.

The council’s Finance Committee last week and then the full council on Tuesday passed the restructuring with little public debate.

While the budget doesn’t bank on future federal aid, the administration remains hopeful the federal government will eventually pass additional relief. The city plans to use short-term borrowing to cover the $450 million of debt restructuring needed for the 2020 budget so it can pull back on the restructuring if federal funds come through.

Since unveiling the budget last month, the Lightfoot administration released the capital program with more money for ward projects, giving some council members reason to swallow the $94 million property tax hike. Some aldermen accused the mayor of threatening to withhold spending or to not take requests from them if they didn’t vote for the budget.

The administration also won over some members by dropping planned layoffs. Instead the city will borrow to cover the $15 million cost, citing the higher-than-expected recreational cannabis sales tax revenue as allowing for the change.

Much opposition remained and votes came after several hours of debate with council members laying out their distaste for the property tax hike that includes a provision allowing for annual hikes tied to inflation, the scoop-and-toss restructuring, and refusal to dip more deeply into $900 million reserves beyond a planned $30 million draw.

Several aldermen offered harsh assessments of the scoop-and-toss. “When I look at the restructuring of our debt … I cannot square that against my sense of financial responsibility,” said Alderman Daniel La Spata, adding the property tax hike was also too much for his ward residents to bear.

“We have the largest scoop- and-toss in the city of Chicago’s history,” said Alderman Anthony Beale. Lightfoot’s predecessors — Rahm Emanuel and Richard M. Daley — had leaned heavily on such tactics until phasing it out with the GO credit several years ago. “This is what I call scoop-and-toss on steroids.”

“We are becoming the next Detroit,” he said referring to Chicago’s Midwestern neighbor that turned to Chapter 9 bankruptcy in 2013 to shed some of its pension and bonded debt. Illinois does not permit municipal bankruptcy.

“I believe this budget represents the city’s roadmap toward a fiscally responsible recovery from this COVID-19 crisis,” he said.

“No one wakes up in the morning wanting to raise taxes … but unprecedented times call for tough decisions to be made,” said Budget Committee Chairwoman Pat Dowell. “Faced with cutting essential workers or essential services to the most vulnerable during a world-wide pandemic versus the modest property tax increase, the choice is clear. Together we have to sacrifice to protect those most in need. That is what this budget does.”

The $800 million 2020 pandemic hole was driven by COVID-19 economic blows to city tax revenues on sales, hotels, and restaurants and the 2021 $1.2 billion shortage stemmed from $800 million of pandemic fiscal wounds and $400 million of rising structural costs. The 2020 hole is closed primarily through CARES Act funds and debt restructuring.

About $500 million of fixes for the 2021 budget hole are structural, including management efficiencies and the revenue package that raises property taxes, motor fuel taxes, cloud computing, and some fees. The remainder are made up of non-recurring tactics, including $500 million of debt restructuring and a $30 million draw on reserves. The city will declare a record tax-increment financing surplus to free up $76 million.

City Chief Financial Officer Jennie Huang Bennett argues the package will allow the city to reach structural balance in 2023 and that’s with more than $1 billion in additional costs being absorbed in 2022 as pension costs and debt service rise.

Pension appropriations rise to $1.815 billion in 2021 from $1.68 billion. The city is carrying $31.8 billion of net pension liabilities, and funded ratios for the funds are at 18% for firefighters, 21% for police, 24% for municipal, and 43% for laborers. The contributions shoot up in 2022 to $2.245 billion due to a roughly $300 million spike when the laborers and municipal fund payments move to an actuarial level and due to modest growth in contributions to police and firefighters which moved to an ARC this year.

Moody’s Investors Service recently affirmed the city’s GO rating that is one notch below investment grade and Fitch Ratings affirmed the city’s rating that is one notch above junk. Both now assign a negative outlook and their reviews followed release of the budget. S&P Ratings rates the GO BBB-plus with a negative outlook. Kroll Bond Rating Agency assigns it an A with a stable outlook.

The city’s post-refunding/restructuring debt load covering the GO and STSC credits will total $11 billion. Chicago’s GOs have been trading in the secondary market at a roughly 300 basis point spread to the Municipal Market Data AAA benchmark. The triple-B spread is at a 115 bp to the AAA. The STSC bonds are higher rated but also trade at a penalty compared to their rating levels.

The administration has expressed optimism the budget can preserve the city’s ratings but Bennett acknowledged all four rating agencies have not yet weighed in on the budget and the city’s fiscal picture could dim if the pandemic further cuts into city revenues.