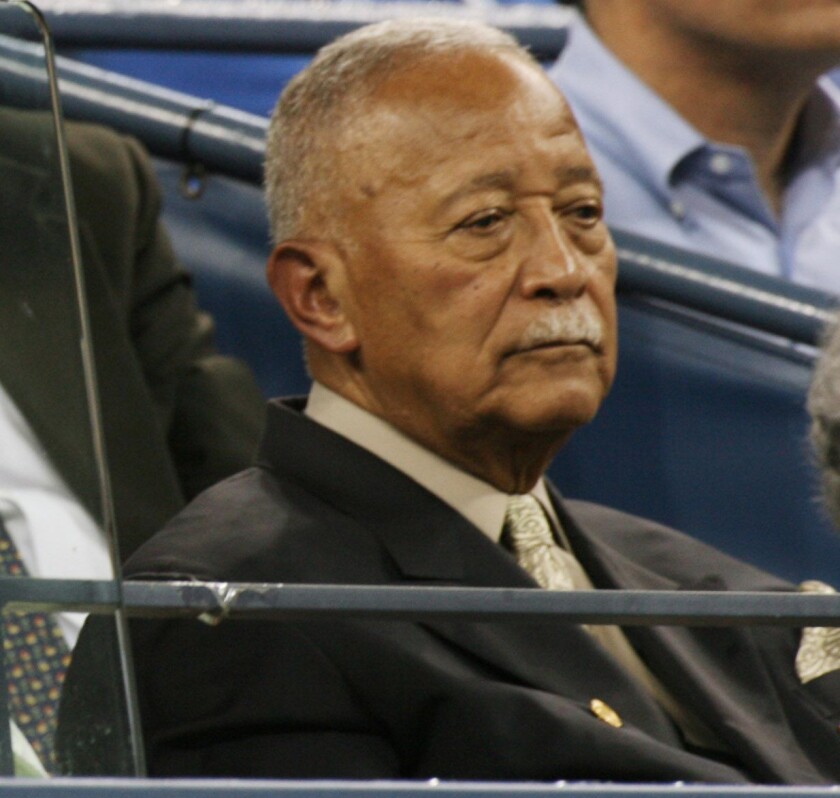 David Dinkins was remembered for his even-handedness during a tumultuous term as New York’s mayor from 1990 to 1993.

Dinkins, the city’s first African-American mayor, died Monday night at his Upper East Side home. He was 93.

“Chirlane and I are mourning a truly great man,” de Blasio said, noting that he met his wife while working for Dinkins. “He believed we could be better. His steadfast commitment to fight for that ‘gorgeous mosaic’ inspires me every single day.”

Dinkins, known as measured, referenced New York as a mosaic during his Jan. 1, 1990, inauguration. He lost his re-election bid in a rematch with Rudolph Giuliani. Racial strife in Brooklyn’s Crown Heights and other parts of the city worked against Dinkins.

“With the passing of Mayor Dinkins, New York lost a remarkable civic leader,” Gov. Andrew Cuomo said. “My friend, you will be missed.”

The city “lost a pillar and a patriot,” city Comptroller Scott Stringer said. “With quiet dignity but lion-hearted love for his city, Mayor David Dinkins led us through one of the most challenging chapters in our history.

“To say he will be missed is an understatement: in a modern political discourse increasingly dominated by sharp words and loud bravado, Mayor Dinkins stood apart in his unwavering civility. Few stood taller.”

The Manhattan municipal building, across the street from City Hall and home to Stringer’s office, was renamed for Dinkins in 2015.

Dinkins, a former Manhattan borough president, toppled incumbent Ed Koch, who was seeking a fourth term, in the 1989 Democratic primary.

“[His] civility and fairness seemed the perfect antidote for 12 years of racial stridency under Koch,” Jack Newfield and Wayne Barrett wrote in their book, “City for Sale: Ed Koch and the Betrayal of New York.”

Dinkins narrowly defeated Republican Giuliani, then a U.S. attorney, in the general election. Giuliani, later a two-term mayor, is now an advisor to President Trump.

“When I started out as a district leader in the village of Harlem, my only ambition was to work hard and to help people and the city I love,” Dinkins said in a speech to the City Council early in his tenure. “I never dreamed that I would someday be mayor.”

Though New York was past its brush with bankruptcy, Dinkins had to manage the city finances during a deep local and national recession. Budget gaps approached $2 billion. His $800 million worth of tax increases marked the city’s largest hike ever.

“A lot was thrown at him,” de Blasio told reporters. “It’s hard to be that patient and that kind when there are so many troubles all around you, but he did it.”

He created after-hours youth centers, began a health program for low-income residents and created the Civilian Police Complaint Review Board. He enjoyed playing tennis and attended the annual U.S. Open in Flushing, Queens.

“Mayor Dinkins inherited multiple crises when he took office in 1990, including record violent crime and a recession,” said Nicole Gelinas, a senior fellow at the Manhattan Institute for Policy Research.

“Yet in standing firmly against budget cuts that would have harmed the city’s ability to hire more police officers, and in promoting Ray Kelly to police commissioner, he set in motion the policies that would lead to a record drop in crime over the next three decades.”

Steven Rubenstein, chairman of the business group Association for a Better New York, called Dinkins “a man consistently ahead of his times.”

Dinkins was born David Norman Dinkins on July 10, 1927, in Trenton, New Jersey. His family moved to Harlem during the Great Depression. After serving in the U.S. Marine Corps during World War II, Dinkins earned his bachelor’s degree in mathematics from Howard University.

Dinkins graduated from Brooklyn Law School in 1956 and started a private law practice that he maintained until 1975.

He began public service in 1966, serving one term in the State Assembly. He was president of the New York City Board of Elections, and was City Clerk for 10 years before his election as borough president in 1985. It was his third attempt at that office.

“David Dinkins was — and is — a hell of a nice guy, toward whom it was impossible to feel anger or resentment,” former Democratic primary opponent Richard Ravitch, now a director at the Volcker Alliance, wrote in his book “So Much to Do: A Full Life of Business, Politics, and Confronting Fiscal Crises.”

After Dinkins’ re-election defeat, he hosted a radio show and was a professor at the Columbia University School of International and Public Affairs. He also served on the school’s advisory board and hosted its annual Dinkins Leadership & Public Policy Forum.

In 2003, the school established the David N. Dinkins professorship chair.