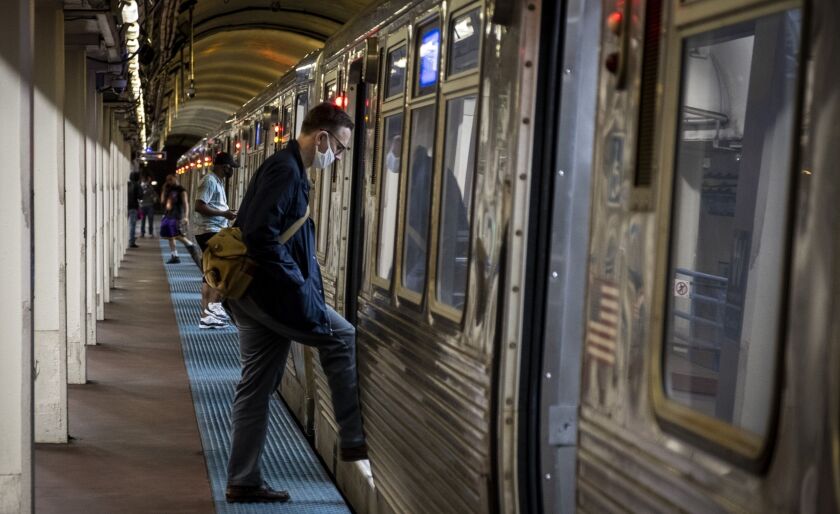 Leaders of the Chicago region’s mass transit agencies laid out 2021 budget plans that rely on a fresh infusion of federal relief in the coming months to manage the COVID-19 pandemic’s impact on dwindling fare and tax revenues.

“I have never in my entire career seen a budget deficit the size of what we are talking about next year. This is Armageddon type of stuff, it’s beyond doomsday,” Chicago Transit Authority president Dorval Carter Jr. told the Regional Transportation Authority of Illinois board at its monthly meeting Thursday. “It’s unsustainable, which is why we need” additional federal dollars.

The RTA’s service boards received $1.4 billion of the $25 billion in national transit aid through the CARES Act enacted last March. All described the funding as a lifeline. They are carrying $537 million into 2021 but it’s not enough to manage through the whole year.

The CTA, which has not cut service, is proposing a $1.64 billion 2021 operating budget that requires $375 million in federal help to stay balanced. Carter’s warnings were echoed by leaders of the Metra commuter rail and Pace suburban bus services. They are the three service boards that fall under the fiscal oversight of the Illinois RTA.

The service boards also offered longer term projections with Metra saying it needs $570 million through 2023 to restore service that’s been cut as fewer commuters travel to downtown Chicago. The CTA is warning of a $390 million 2022 deficit and $359 million hole for 2023. Pace says it needs $89 million to balance amid a reduced schedule through 2023.

“As a result, the total additional funding need for 2021 through 2023, above and beyond the remaining CARES Act funding, is more than $1.8 billion,” RTA documents say. “If this additional relief funding does not materialize, each service board would be forced to take unspecified budget balancing actions to resolve projected revenue shortfalls, which could include fare increases, service reductions, job cuts, and other cost saving measures. The impact on our already challenged transit system might be catastrophic.”

The RTA will vote on the budget Dec. 17.

The three did not offer specifics on what cuts would be proposed or fare hikes. RTA board Chairman Kirk Dillard said he understood the boards’ reluctance to trigger panic buttons telling them they can reference the New York Metropolitan Transit Authority as an example of where the Chicago region is headed.

MTA officials warned at its Nov. 18 board meeting that without more federal help they might have to cut 9,300 jobs — about 13% of its workforce — and service of up to 50% on subways, buses and commuter trains. Budget gaps through 2024 would total nearly $16 billion.

The combined budgets for Metra, Pace, and CTA total $3 billion. About $1.15 billion of operating revenue comes from system-generated revenue primarily from passenger fares. Public funding totals about $1.88 billion and comes from a regional sales tax and state funding.

As the state grappled in recent years with its own mounting fiscal woes, it cut into funding levels and officials worry the state’s $4 billion gap will further cut into funding. It currently imposes a 1.5% surcharge on RTA sales tax collections that amounts to a $20 million annual loss for the RTA. The state has cut its aid levels by 5%. The state is also $198 million behind on payments owed to the transit agencies. The RTA manages those payments in the arrears with state-authorized short-term borrowing authority.

Carter said the CTA has no current plans to borrow for operations or transfer capital dollars for operations as it did years ago although borrowing is an “unanswered question” if new federal dollars don’t come to fruition in the first half of next year.

Metra executive director Jim Derwinski said the agency has no plans for a capital transfer although that’s an option late in 2021 if federal help still hasn’t arrived. Metra is not considering borrowing for operations.

The RTA expects to spend $6.35 billion on capital projects over five years with about $837 million going to cover debt service. The funding hinges in part on the state staying on course with the $45 billion capital program it approved in 2019.

Transit funding struggles prompted S&P Global Ratings to move the outlook on its AA rating of the RTA to negative from stable over the summer.

Moody’s Investors Service in May moved the CTA and RTA’s outlooks to negative from stable. Moody’s affirmed the RTA’s sales tax bonds at A2 and downgraded the RTA’s general obligation variable rate bonds to P-2 from P-1 because that rating is capped based on the RTA’s long term rating and outlook.

Fitch Ratings in December 2019 raised the RTA’s rating to AA-plus from AA on its $1.7 billion of outstanding general obligation bonds and cash flow notes and assigned a stable outlook.

Ahead of the CTA’s summer bond sale, S&P affirmed its A-plus rating on the second lien sales tax bonds and AA on the senior lien. Kroll Bond Rating Agency affirmed its AA-minus and AA ratings on the two liens. Both agencies assign a negative outlook.

Moody’s maintains a pessimistic view for transit laying out its concerns in a Nov. 17 report.

Public health concerns and shifting work patterns will depress ridership recovery. Nationwide ridership will grow 30% in 2021 but remain well below the pre-coronavirus level, Moody’s said. Tax revenue declines will weigh on transit system finances. While declining less than fares, state and local taxes dedicated to mass transit will remain well below levels needed to balance budgets. Prospects for significant new state and local government subsidies are uncertain as the Biden administration takes office next year with a Senate that may remain in GOP hands depending on the outcome of two Georgia runoff elections.