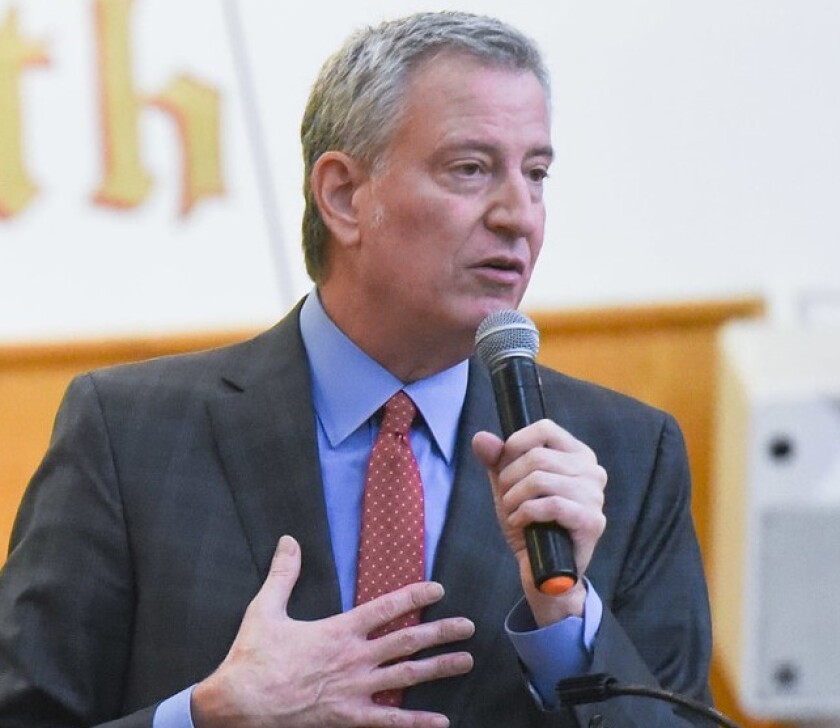 While warning about the nearly $4 billion gap New York City faces for fiscal 2022, Mayor Bill de Blasio defended his administration from criticism that it should do more.

“We’re constantly doing the work of tightening our belts,” de Blasio said on Monday as he released his $92 billion financial plan update for the current fiscal year.

The city must present its FY22 plan in late January for enactment by June 30.

De Blasio repeated his call for further federal aid, which is stalled in Congress.

“Of course, that gap could easily grow,” he said, citing variables such as New York State passing cuts onto cities.

FY21 remains balanced at $92 billion, de Blasio said in a briefing from the City Hall Blue Room. That reflects coronavirus-related spending and the recognition of federal grants.

Also, he said, tax revenues are $748 million above the June revenue forecast.

The mayor’s plan falls short, according to Andrew Rein, president of the watchdog Citizens Budget Commission.

“New York City is in the midst of a fiscal crisis and should budget accordingly. This budget update does not meet the moment,” Rein said.

Future savings, he said, is less than one-half of 1% of city funded spending.

“For the city to be stable in the long run, it needs to restrain spending to a level that will be sustainable when the economy recovers and any federal aid is depleted. The mayor should be asking his commissioners for significant reductions that he can now include in the next preliminary budget.”

New York has taken multiple hits from the capital markets since the pandemic escalated in March. Most recently, Moody’s Investors Service last month downgraded the city’s general obligation rating to Aa2 from Aa1.

De Blasio spoke as the city is coping with a spike in the virus that could force a rollback on the city’s reopening process. He closed the public schools to in-person learning on Thursday.

The citywide rolling seven-day average for positive tests was at 3.06%, the mayor said Monday. One day earlier, Gov. Andrew Cuomo wanted that parts of Manhattan’s Upper West side and Staten Island borough would be in line for more restrictions.

According to de Blasio’s Office of Management and Budget, the city’s unemployment rate dropped to 13.2% in October from 20.3% in June, and the city has regained one-third of the 900,000 jobs it lost in March and April.

The mayor said a New York-friendly presidential administration taking office in January, the pending arrival of a vaccine present signs of hope.

“The way forward is clearer than ever,” he said. “With a stimulus, all these pieces come together. Without a stimulus, we struggle.”

The prolonged impact of the pandemic on tourism would have “clear implications” on the city’s economic and fiscal recovery, municipal bond analyst Joseph Krist said.

“New York stands above other U.S. cities in its focus on tourism. It has made the economy that much more vulnerable to the particular circumstances of a pandemic,” he said. “The issue for policymakers in the city is how to adapt budgets to these realities.”

De Blasio’s transportation commissioner, Polly Trottenberg, resigned Monday, and is expected to work for the Biden administration. While she has not announced her next move, Trottenberg, a former U.S. Department of Transportation undersecretary, has been advising the Biden-Harris transition team on transportation matters.

The mayor called her “a tireless and talented public servant.”