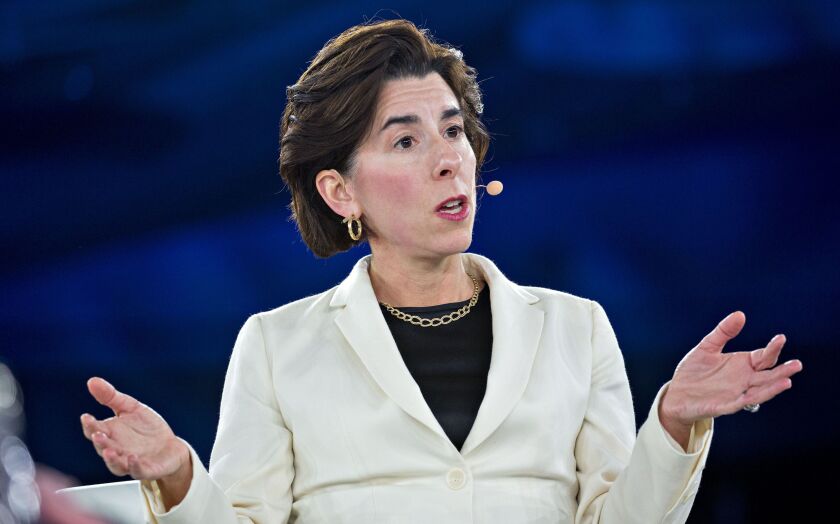 Dynamics at the capitol in Providence include a steep resurgence of COVID-19 cases; a long-overdue fiscal 2021 budget for Gov. Gina Raimondo and a lame-duck General Assembly to enact; and modest gains by progressives within the ruling Democratic ranks.

Raimondo on Thursday called for a pandemic-driven two-week pause beginning in 10 days that includes the closing of in-person learning at colleges; limits on retail and religious assembly; and an indoor dining scaleback.

Worsening numbers could trigger a harder pause, she said. “I’ll be out of options.”

“Frankly, it’s alarming,” Raimondo told reporters at the Veterans Memorial Auditorium next to the State House.

Her call on families to not to socialize outside their immediate households is bound to generate resistance as the holiday season looms.

“There are a lot of funny memes going around about me showing up in people’s living rooms. I kind of wish I could do that,” she said.

The remaining six weeks, the governor said, mark an important bridge to the arrival of a vaccine. “We’re in the seventh inning,” she said. “We’re not there yet.” Pfizer has designated Rhode Island as one of four states to pilot its vaccine.

Only Rhode Island and South Carolina have yet to pass a budget. Raimondo and top lawmakers delayed the budget vote until after the election, hoping for a clearer picture from Washington about further coronavirus rescue aid.

Without such assistance, House fiscal advisor Sharon Reynolds Ferland told the House finance committee on Wednesday, the state is facing a deficit of roughly $275 million for fiscal 2021. Favorable revenue estimates of late and other factors have whittled the estimate from the $900 million pegged in June.

Mattiello lost his 15th District re-election bid to Republican Barbara Ann Fenton-Fung, in no small part due to negative publicity from the criminal trial of his former campaign consultant, Jeffrey Britt. House Democrats on Nov. 5, two days after the election, voted for Majority Leader Joe Shekarchi of Warwick to succeed Mattiello as speaker effective January.

Uncertain is Mattiello’s role in the budget talks, or the degree to which he would defer to Shekarchi. While Raimondo and Mattiello have frequently clashed, Shekarchi could be more favorable toward the governor. He managed Raimondo’s campaign for state general treasurer in 2010, a position she held for four years before her election as governor.

The House speaker, through longstanding quirks, has disproportionate clout on budget and other governance matters.

“It comes from a variety of factors, some constitutional, some institutional,” said Adam Myers, a Providence College political science professor. “It is arguably the most powerful position in state government, some say more than the governor. And the House speaker is more powerful than the Senate president.”

Unlike in many other states, the governor has no line-item veto power. The Senate is often an afterthought, although it has flexed its muscles of late in the back-and-forth over Mattiello’s signature legislation, the car-tax phaseout. Additionally, the House controls a committee in charge of staffing, the Joint Committee of Legislative Services, which the speaker chairs.

Mattiello, who became speaker in 2014 after Gordon Fox resigned following an FBI raid on his home and State House office. Fox spent two years in federal prison for accepting a bribe.

Critics have called Mattiello overly abrasive and autocratic. “He has been a controversial speaker,” Myers said.

The month-long Britt trial in state Superior Court in Warwick cast a harsh light on Mattiello, even though the speaker was not charged.

Britt was indicted on charges of felony money laundering and a misdemeanor charge of making a prohibited campaign contribution. At issue was whether Britt laundered $2,000 to help pay for a postcard mailer designed to boost Mattiello during a 2016 race that he won by only 85 votes over Steve Frias.

Mattiello denied having advance knowledge of the mailer. He also accused the media of treating him unfavorably during the campaign.

Judge Daniel Procaccini could rule on the case by month’s end. Britt waived his right to a jury trial.

The trial publicity factored in this year’s election result, Myers said. “The details were so off-putting to many people.”

They also helped Fenton-Fung bang down the door.

Fenton-Fung, the wife of departing, term-limited Cranston Mayor Allan Fung — twice a GOP gubernatorial candidate — won with 59% of the vote. Fenton-Fung, 39, is a physical therapist at Rhode Island Hospital who, while asymptomatic, tested positive for the coronavirus in April and has recovered.

“She ran a very energetic campaign,” Myers said. “The Republicans over so many years put so much energy into taking out Mattiello. This was the hill they were going to die on.”

Fenton-Fung seized on the trial fallout and the state budget inaction.

“We are one of only two states that is nowhere on the budget,” she said on a televised debate. “As I go door to door, people are asking me where has the General Assembly been? [Mattiello] has been asleep. Despite putting in $200,000 of plexiglass up on Smith Hill, they refuse to meet.”

Mattiello campaigned on a predictability theme, calling himself a firewall against his party’s more progressive wing. New speaker Shekarchi is considered a moderate.

Speaking to reporters after his nomination at the Crowne Plaza in Warwick, Shekarchi struck a pragmatic tone about the budget.

“Literally everything is on the table,” he said. “Whether it might be, unfortunately, some kind of tax increase or some kind of layoffs, or possibly even some kind of reduction in spending.”

He also acknowledged a need for change from within.

“I think the party needs to be restructured and modernized and I’m willing to do that with the governor and the Senate president and all Democrats … local city and town chairs,” he said on Providence television station WPRI’s Newsmakers show.

Myers sees the legislature as “gradually moving left,” which could open the possibility of an increase in the highest income tax rate and the legalization of recreational marijuana.

Fenton-Fung, in the debate, gave Raimondo a B grade for her handling of the virus. She gave the General Assembly an F.

Community spread such as family, bar and after-school gatherings make the pinpointing of virus escalation difficult, Raimondo said. “We can’t do that now. People are increasingly mobile and it’s difficult.”

While media pundits have linked the governor to a possible cabinet position in Biden’s administration, Raimondo, who can’t seek re-election in 2022 because of term limits, stands to face headwinds from labor groups still miffed over the public pension overhaul she championed in 2011 as treasurer.

Raimondo and Biden have developed a warm relationship over the years.

In May 2016 while Biden was vice president under Barack Obama, he visited the state to tout Raimondo’s $500 million RhodeWorks bridge-and-road improvement plan.

His visit evolved from a meeting between the two earlier that year at a national conference.

“He said, ‘Hey gov, you’re doing a lot of good things there.’ ” Raimondo told reporters at the time. “I said, ‘Why don’t you come to Rhode Island and learn about it?’”