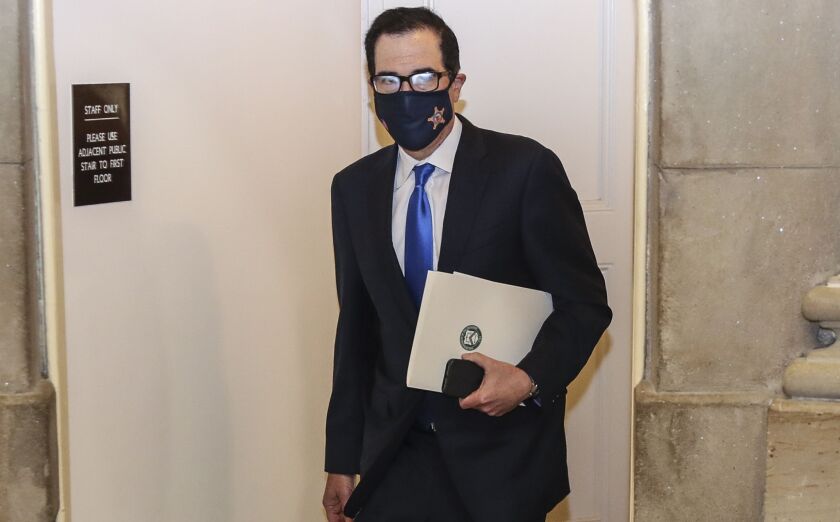 The Federal Reserve’s Municipal Liquidity Facility and other Fed lending facilities will close at the end of the year, barring any legislative action from Congress to extend them.

U.S. Secretary Treasury Steven Mnuchin sent a letter to Fed Chair Jerome Powell saying several Fed provisions will sunset and asking the Fed to reimburse any unused funds, while also asking for other facilities, such as the Money Market Mutual Fund Liquidity Facility, to be extended by 90 days. The money market facility includes short-term municipal debt, including municipal securities, with maturities of 12 months or less. Market participants have said that facility has been more beneficial to more issuers than the MLF.

Mnuchin formalized the moves by asking the Fed to return unused funds of the MLF and four other lending programs created under the CARES Act to the Treasury. The MLF expires on Dec. 31, 2020.

The Federal Reserve responded with a short statement saying it “would prefer that the full suite of emergency facilities established during the coronavirus pandemic continue to serve their important role as a backstop for our still-strained and vulnerable economy.”

The Fed had the authority under the CARES Act to lend up to $500 billion for state and city issuers through the MLF. The U.S. Treasury provided $35 billion from the Exchange Stabilization Fund, using funds appropriated under the CARES Act, for the program. The rest of the funding comes from the Fed.

So far, Illinois and the New York Metropolitan Transportation Authority have been the only issuers to use the MLF. Both issuers this week said they intended to tap the facility before it expires and Mnuchin’s announcement will not change those plans as both were allocated a portion of the money in the law.

The announcement was not totally unexpected, said Michael Decker, senior vice president of policy and research at Bond Dealers of America. In an Oct. 16 letter responding to written questions from the Congressional Oversight Commission, Treasury said the MLF should not be extended past the end of the year.

Additionally, market participants have called the MLF a backstop and a last resort for the municipal market, which has rebounded significantly since the March sell-off.

“When you look at how the market has recovered from the spring, where we’ve got yield levels that are very low, as low as they’ve been,” Decker said. “Issuance is booming; every month since April has been an increase in issuance from last year.

“Really market conditions are as issuer friendly as they ever get,” Decker added.

Mnuchin said the facilities supported by the CARES Act funds “have clearly achieved their objective.”

“In the municipal bond market, the spread on AAA-rated general obligation bonds has fallen from 2.09% above to 0.07% below Treasury bonds while A-rated borrowers have seen their spread fall from 2.37% to 0.26%,” Mnuchin wrote. Mnuchin also pointed to the record issuance in October as another reason for discontinuing the MLF.

However, Mnuchin did say that the facilities could be reestablished.

“In the unlikely event that it becomes necessary in the future to reestablish any of these facilities, the Federal Reserve can request approval from the Secretary of the Treasury and, upon approval, the facilities can be funded with Core ESF (Exchange Stabilization) funds, to the extent permitted by law, or additional funds appropriated by Congress,” Mnuchin said.

“It is entirely up to the United States Treasury to carry out the legislative intent of any bill,” Brock said

The U.S. Government Accountability Office audits the Treasury to ensure that legislative intent is being carried out, Brock said.

“There will be appeals from congressmen and senators about this, saying that their interpretation of the legislation is wrong and here is why,” Brock said, but added that Mnuchin’s interpretation is pretty definitive.

However, Congress does not have a lot of time to act before the end of the year.

“Do they have enough time to address this by Dec. 31 is a big question,” Brock said.

The MLF was created in April as part of the CARES Act. It is open to counties with populations of 500,000 or more and cities of 250,000 or more. In June, the central bank allowed U.S. states to be able to have at least two cities or counties eligible to directly issue notes regardless of population. Governors of each state are also able to designate two issuers whose revenues are derived from activities such as public transit and tolls.