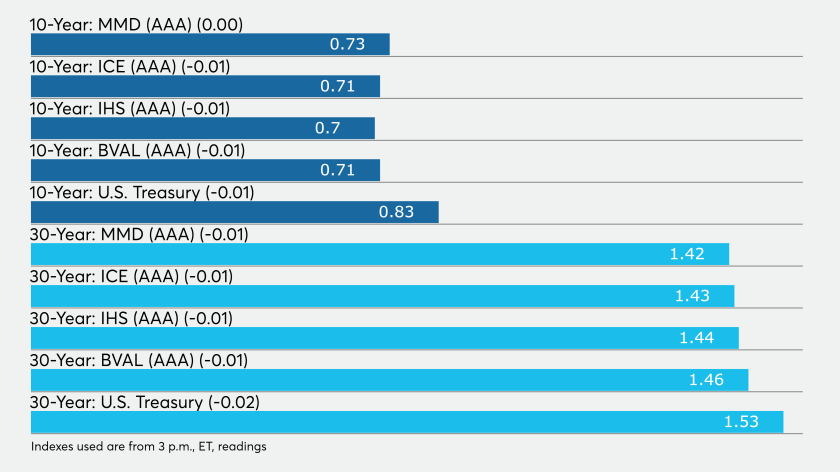 The long end of the municipal market firmed Friday as the expected new-issue calendar slipped to about $1 billion for the Thanksgiving-shortened trading week.

Treasury yields slipped as stocks turned mixed Friday while the markets watched the disagreements between the White House and the Federal Reserve over emergency lending programs such as the Municipal Liquidity Facility.

“Most people are looking to the period after Thanksgiving,” to get back into the market when new issuance picks up between then and the next holiday season, Mousseau said.

Primary market
IHS Ipreo estimates volume for the week of Nov. 23 at $1.27 billion, down from the almost $11 billion seen in the previous week. The calendar is composed of $1.04 billion of negotiated deals and $233 million of competitive sales.

There are only two negotiated deals slated for Thanksgiving week that are over $100 million.

The issue is the first part of a $1.1 billion offering from the corporation, which will also sell a $671 million non-AMT tax-exempt issue the week of Dec. 14. Proceeds of the issue will be used to defease or redeem JFK IAT’s outstanding Series 6 bonds and to repay JFK IAT’s subordinated Port Authority investment.

“These are extraordinary times. Use of refinancing to push off debt service into the future has often been criticized. When it is used to support poor management or weak support for raising revenues, that criticism is understandable,” said municipal bond analyst Joseph Krist. “During the pandemic, the old rules don’t apply, at least for the present. We don’t think that they should. So we view the proposed refinancing of the debt issued for the International Arrivals Building at New York’s Kennedy Airport in that context.”

The bonds will be issued to refinance all outstanding debt at JFK IAT.

“[The refinancing] will create savings from lower debt service costs which will reduce annual debt service in the next five years,” he said in a Friday market comment. “This enhances the position of the bondholders, Delta under its Anchor Tenant Agreement, and labor.”

“The major downward pressures remain and are subject to additional risk given the international demand the facility is intended to serve,” Krist said. “This has caused its recovery to lag that of other less vulnerable terminal projects.”

He noted the ongoing effects of the COVID-19 pandemic would remain a challenge.

“The risk of a more challenging downside scenario remains high for now as the severity and duration of the pandemic and related travel restrictions remains uncertain, particularly given the increasing number of infections in the U.S. and the corresponding public health reactions that results in less travel,” Krist said.

Also on Tuesday, Citigroup is expected to price the Denton Independent School District, Texas’ (NR/AAA/AAA/NR) $266.693 million of Series 2020A taxable refunding bonds. The deal is backed by the Permanent School Fund guarantee program.

There are no competitive sales slated that are over $50 million.

BofA: Good and bad news on COVID
Even as there was positive news on vaccines from Moderna and Pfizer during the week, more states put restrictions on their economies amid a surge in COVID cases, according to a report from BofA Global Research released on Friday.

“As negative headlines on COVID cases and state or local shutdowns increase over the comings weeks, it is important that investors stay invested,” BofA said. “Despite the spring calls for doom and gloom, downward rating activity and defaults have been modest. California went from projecting a $54.3 billion two-year budget deficit to now projecting a $26 billion general fund windfall in 2021-2022! Other states are also outperforming earlier forecasts … [municipals are] a strong asset class; it has historically been and we expect it to be as well in the future.”

BofA also said it continues to prefer high-grade issuers from a credit perspective because in their view those issuers are better positioned to handle COVID-related stresses and will stand to benefit more from the next round of federal stimulus.

“Our base case remains $200 billion to $400 billion of direct aid from Washington for state and local governments,” BofA said.

The most active bond types traded this week were revenue bonds, followed by GOs and taxables, according to IHS Markit.

Bond Buyer indexes move lower
The weekly average yield to maturity of the Bond Buyer Municipal Bond Index, which is based on 40 long-term bond prices, fell four basis points to 3.54% from 3.58% in the previous week.