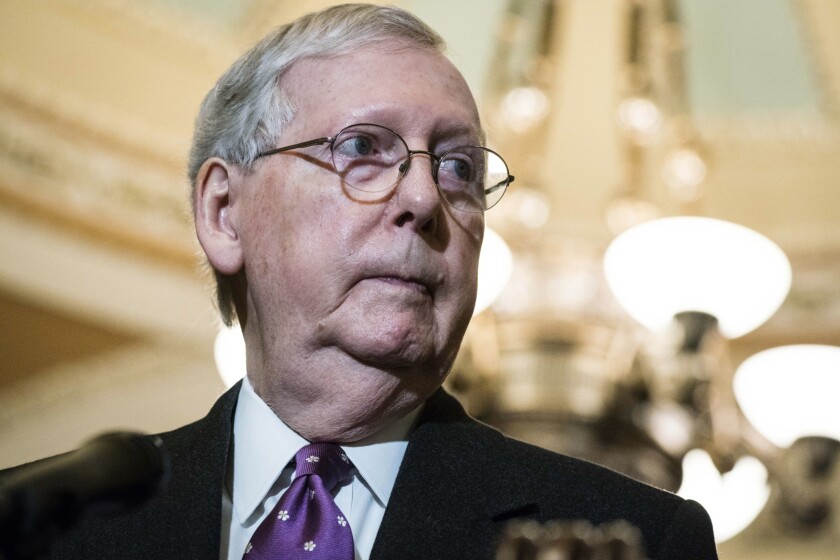 The National League of Cities and other state and local groups say the surge in COVID-19 cases should make immediate direct federal aid an urgent priority of the lame-duck Congress.

“No state has enough money to deal with this meltdown, no one state, no matter who we are,” New Jersey Gov. Phil Murphy said Thursday on MSNBC Live with Stephanie Ruhle. “And we need the federal government to step up, and not just step up in a modest way, but in a big way.”

Similar appeals have been made this week by other governors.

“Everyone on both sides of the aisle in Washington needs to come together and finally get this done for the American people,” Maryland Gov. Larry Hogan, a Republican, said at a news conference Tuesday.

But no new negotiations are on the horizon as Washington lawmakers prepare to take a one-week hiatus from their lame-duck next week for Thanksgiving.

McConnell, for his part, has said he remains open to a bill in the $500 billion range while Democrats remain committed to the revised $2.2 trillion bill passed by the House.

“Republicans have tried for weeks to pass another targeted rescue package,” McConnell tweeted Tuesday. “It would send hundreds of billions of dollars to schools, unemployment aid, another round of the job-saving PPP, and healthcare. Democrats repeatedly blocked it all. Let’s hope they let us make law soon.”

McConnell also tweeted on Tuesday, “Another Democrat demand that’s blocked bipartisan aid: The fixation on a massive slush fund for state & city govt’s, unlinked from COVID need. Some states are taking in more tax revenue this fall than they did before the pandemic.”

Mark Ritacco, director of government affairs for the National Association of Counties, was asked by The Bond Buyer to comment on McConnell’s tweets.

“There doesn’t seem to be any negotiation happening with either the administration of the House where they could talk about and hash out those differences,” Ritacco said.

Tweleve states have reported a year-over-year increase in total revenue between the onset of the pandemic in March through the end of September, according to data collected by the State and Local Finance Initiative at the Urban Institute.

“Preliminary figures from 35 states indicate that overall state revenues declined by 3.9% in FY 2020 compared to FY 2019,” wrote Lucy Dadayan, a senior research associate for the State and Local Finance Initiative in a report issued Tuesday. “Most states are forecasting large revenue shortfalls for the current fiscal year 2021.”

Ritacco said that earlier this year the pandemic led to revenue shortfalls in many counties while in many others it caused mostly higher costs for their healthcare services.

But the “incredible spike” in COVID-19 cases throughout the country is causing almost all counties to deal with both revenue losses and increased healthcare costs at the same time, Ritacco said. “The public health response nine months on is still a primary source of fiscal strain in counties,” he said.

During a webcast conference held this week by the National League of Cities, mayors and other officials emphasized their situation is dire.

“Let me be clear: Cities are still being forced to lay off essential employees, cancel job-creating infrastructure projects, and reduce the services that support the growth of small businesses in their communities,” said Mayor Vince Williams of Union City, Ga.

“Local leaders know exactly what they need to do, but we don’t have the funding to do it,” Williams said. “The time is now. The situation is getting dire by the day. It’s unfathomable we have not had the next COVID relief package passed.”

Clarence Anthony, CEO and executive director of NLC, said a new study published by researchers from Princeton University at Marquette University found that the budget cuts enacted as a result of the Great Recession weakened local public health infrastructure, leaving many cities unprepared for this pandemic.

“We’re dealing with the same issues now,” Anthony said. “Local leaders are not only on the front line, trying to respond to emergencies that’ve been brought on by COVID-19. We’re also bearing the brunt of the economic downturn caused by the pandemic. And I’m gonna say this very clearly, without direct local aid, Americans will continue to fight COVID-19 with one or both arms tied behind their back.”