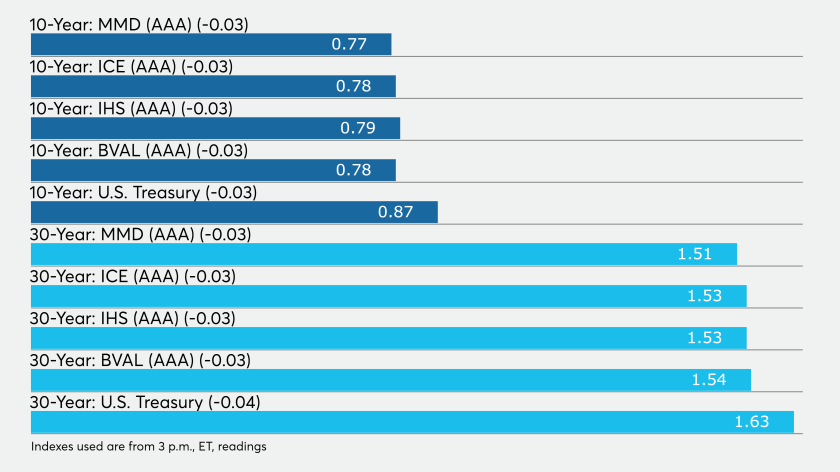 New Jersey’s $3.7 billion tax-exempt COVID-19 emergency bond deal was oversubscribed to the tune of $40 billion, repriced by as much as 20 basis points to lower yields, coming amid a stronger municipal market Tuesday.

The strong demand amid a dearth of new municipal issuance by states and a search for yield also allowed New Jersey to skip a planned taxable portion and officials announced it would not need to access the Fed’s Municipal Liquidity Facility.

“New Jersey is a blowout,” a New York trader said. “Several customers are reporting 12 to 13 times oversubscribed with near $40 billion in orders. One message I got said about $15 billion in orders, but either way, plenty of demand … as expected at those spreads.”

Across the market, in secondary trading, top-rated municipal bonds strengthened, with yields falling by as much as three basis points on the AAA scale.

BofA Securities priced and then repriced New Jersey’s (A3/BBB+/A-/A) $3.7 billion of COVID-19 Series 2020A tax-exempt general obligation emergency bonds to lower yields by as much as 20 basis points in the longer maturities, lower by 30 basis points from price talk on Monday.

The deal had originally been sized at $4 billion and slated to sell on Wednesday containing a taxable social bond component, but sources said there was so much demand the state was able to move up the deal, downsize a bit and sell it as an all-exempt issue.

“We are extremely pleased with today’s outcome,” said State Treasurer Elizabeth Maher Muoio. “We believe the significant oversubscription we witnessed and the favorable interest rate we received is a sign that investors have faith in New Jersey’s fiscal outlook.”

Jennifer Sciortino of the State Treasurer’s Office said, “At this time, the state intends to sell the bonds in the capital market and does not intend to access the Municipal Liquidity Facility. There will not be a taxable component. The bonds will all be sold tax-exempt. It will be a 12-year transaction.”

The deal came to market after S&P Global Ratings recently downgraded the state’s GOs to BBB+ from A-minus based on revenue losses triggered by the coronavirus. The issue carries negative outlooks from Moody’s Investors Service and Fitch Ratings and stable outlooks from S&P and Kroll Bond Rating Agency.

Matt Fabian, a partner at Municipal Market Analytics, said that while the Nov. 6 downgrade may have been triggered by the COVID-19 sale, it was not the only reason for the cut.

“MMA expects that the other agencies will eventually follow S&P and lower the state’s rating into the same territory: 1) as its ability to achieve structural balance will likely remain extremely challenged post-pandemic; and 2) debt metrics rise as revenue growth lags that of its mounting bills.”

Primary market
In the competitive arena, the City and County of Denver, Colo., (Aaa/AAA/AAA/NR) sold $401.68 million of bonds in two offerings.

On Wednesday, Morgan Stanley is expected to price Massachusetts’ (Aa1/AA/AA+/) $1.36 million of GOs for retail investors ahead of Thursday’s institutional pricing.

Lynne Funk contributed to this report.