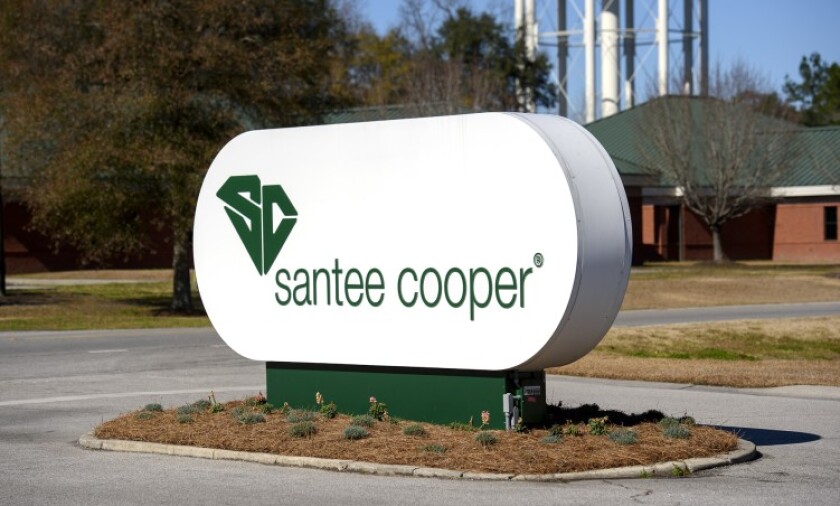 South Carolina-owned utility Santee Cooper reported that its revenue and refunding bond deal was oversubscribed by more than five times.

The $638.2 million of bonds priced Wednesday, drawing $3.5 billion in orders from investors.

The deal obtained a blended a true interest cost of 2.87% and achieved $134 million in net present value savings.

The “transaction demonstrates our commitment to create real savings for customers by strategically managing debt,” Mark Bonsall, the utility’s president and chief executive officer, said in a statement.

“So far in 2019 and 2020, we have paid off over $650 million, thus eliminating future interest charges on that debt, and refunded another $721 million to successfully take advantage of lower interest rates,” he added.

The bonds are rated A-minus by Fitch Ratings, A2 by Moody’s Investors Service, and A by S&P Global Ratings. Fitch and Moody’s have a stable outlook on the debt.

S&P has a negative outlook on the utility’s debt that it said reflects uncertainties related to the continuing fallout from the decision not to complete the construction of two nuclear reactors, whether the state will sell the utility or seek additional concessions for ratepayers because of the debt issued for the uncompleted reactors, and the effects of the coronavirus pandemic.

Combined, the two series of bonds shortened the average life of the refunded debt to 13 years from 21 years, Santee Cooper officials said. Closing is set for Nov. 5.

“There was a lot of breadth in terms of participation up and down the curve,” said John Daniel, managing director of Barclays, the book-runner for the 2020A bonds.

The transaction “lays a good foundation” for future refinancing options as Santee Cooper continues to execute its debt management strategy, he added.

PFM is the financial advisor for Santee Cooper, which is formally known as the South Carolina Public Service Authority.

BofA Securities was the book-runner for the 2020B bond.

This Is How Real Estate Is Adapting To The Ongoing Pandemic According To JLL CEO Guy Grainger
With Record Real Estate Prices, Now Is A Good Time To Sell Your Home
Op-ed: How pro investors are adapting to the influx of quick-triggered, app-using market players
The bar is raised for news that can lift the market as the crowd now believes next year will be good
Tom Clancy’s Baltimore Penthouse Is Headed To The Auction Block