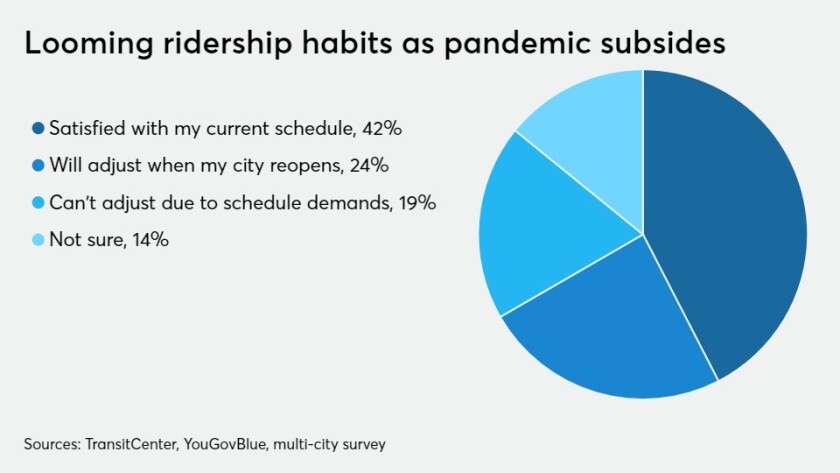 How effectively mass transit systems nationwide can serve riders coming out of the COVID-19 pandemic remains a huge variable.

One example of the fluid landscape is the multiple scenarios the Massachusetts Bay Transportation Authority and its parent, the state Department of Transportation, posed for 2021 through 2023. The primary drivers are the evolution of the pandemic’s effects, the economic recovery pace and travel behavior changes.

Mass DOT cited modeling by Moody’s Analytics and the U.S. Department of Labor’s Bureau of Labor Statistics, as well as an MBTA employer survey.

“While designed for the Greater Boston metropolitan area, the exercise highlights the issues which will face most, if not all mass transit systems in the nation’s urban areas,” municipal bond analyst Joseph Krist said.

Mass DOT presented its draft at last week’s board meeting.

Under the first scenario, economic, demographic and mobility patterns would gradually return to mostly pre-pandemic conditions with few changes in travel behavior and only slight increases in telework. Travel and business restrictions are off and consumer spending slowly rises.

The second scenario features diverging travel patterns as consumers and employees adapt to remote meeting and e-commerce technologies. While travel and business restrictions are lifted, consumer spending slowly increases but consumers have increasingly shifted shopping and other activities to digital and e-commerce. “Telehealth appointments are common and higher education is increasingly online,” the report said.

In the worst ridership scenario, the economic effects of COVID would linger, notably on the MBTA. “Telecommuting becomes the standard practice for the foreseeable future,” the report said. “The period in which at least some travel and business restrictions remain in place is longer in this scenario.”

The MBTA, which operates mass transit in Greater Boston, is crafting plans for $150 million of service cuts, which would take effect in the spring. Officials expect fare revenue to max out at 38% of pre-pandemic levels by June.

The authority’s losses could spike to $271 million by FY22.

“One of the things that has been most striking to me in my six years at the MBTA has been how quickly we try to adapt,” Laurel Paget-Seekins, the authority’s assistant general manager for policy, said on a webcast hosted by the New York-based civic organization TransitCenter.

“Things have moved much faster in the last six months than ever before in terms of figuring out how we have to adapt to a changing situation … building new tools, getting new data sets, installing barriers, you know, figuring out our ventilation systems, putting in new procedures, new policies.”

A survey of major American cities in TransitCenter’s report, “A Transit Agenda for the COVID-19 Emergency,” suggests that riders would resume riding transit en masse if transit officials and city governments grasp safety concerns and adapt service to align with shifting travel preferences.

The decline in survey respondents who regularly use transit is substantial, the report said, but smaller than the roughly 75% drop in total transit trips that agencies typically observed.

“This implies that while some people have stopped riding transit, a significant share of the drop in trips is due to people riding less often. In other words, many people who formerly rode transit multiple times per day may now be riding sporadically, not abandoning transit altogether,” the report said.

TransitCenter called for protecting the transit workforce and riders by expanding sick-leave and quarantine policies; supplying masks and other protective equipment; ventilating vehicles and shared areas; and communicating clearly with riders.

These practices should hold even amid dire funding circumstances, the organization said. Transit systems nationwide are seeking a combined $35 billion in federal aid, with the latest rescue bill stalled in Congress until after the election if it comes at all.

“[Some] hygiene efforts are more about appearances than reducing risk,” the report said. “Wiping down the exterior of trains, for instance, affects a surface that people rarely touch.”

Gershon is more confident in the MTA’s attempt to disinfect with UV light in vehicles’ air conditioning ducts.

Regardless of budget strife, systems should implement fare-relief programs for the poorest riders, Laura Chu Wiens, executive director of the advocacy group Pittsburghers for Public Transit.

CARES Act money at the county or state level could backstop such programs, she said.

“We have gotten pushback around the fact that we’re calling for fare relief during this funding crisis for transit agencies and we say that frankly, if an agency’s financial solvency plan relies on extracting fares from people that are least able to pay, then that is not a plan at all.”