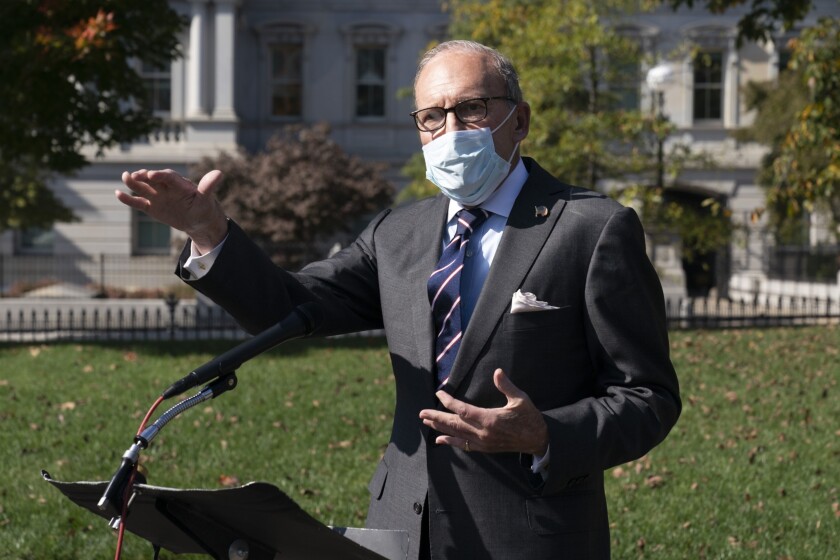 State and local governments are rushing to exhaust the federal aid they received under the CARES Act prior to a Dec. 31 spending deadline at the same time the short-term prospect for another round of help appears increasingly dim.

“There are still significant policy differences,” Larry Kudlow, director of the National Economic Council, told reporters outside the White House on Thursday.

Pelosi said Thursday during her weekly news conference that state and local aid is important because 90% of public education costs are covered by state and local governments.

The National Governors Association reported this week that states expect to exhaust their entire share of the $150 billion in federal aid in the Coronavirus Relief Fund by the Dec. 30 deadline. NGA said states have allocated nearly 90% to date and obligated over 60%

In a separate survey that includes local governments as well as states, the Government Finance Officers Association reported that 82% of respondents anticipated spending all of their CRF allocation by the end of December.

State officials continue to work their way through federal regulations that limit the uses on the federal aid that’s available through the Coronavirus Relief Fund.

The National Conference of State Legislatures held a webcast Thursday that enumerated eligible versus ineligible uses of the money.

Marcia Howard, executive director of Federal Funds Information for States program, said the Coronavirus Relief Program was supposed to be a flexible grant but it did not allow state and local governments to backfill lost revenues.

“And it was supposed to be given to local governments, so even when there weren’t explicit mandates on how that money got spent, there were sometimes implicit ones that became just as burdensome,” Howard said.

On the positive side, states are receiving a 6.2% enhancement to their Federal Medical Assistance Percentage (FMAP) for Medicaid as long as long at the COVID-19 health emergency continues.

The COVID-19 public health emergency originally declared Jan. 31 already has been renewed three times through March 31, 2021 and is expected to continue past that date.

Howard pointed out that the opioid epidemic public health emergency is still in effect three years after it was initially declared in 2017.

Pelosi told reporters “we have made good progress this week” in the negotiations although she emphasized that once an agreement is reached it still will take days to put it into legislative language.

Kudlow said the economy is making “great progress” but “we know that unemployment is still too high.”

“We want to reopen businesses and get people back to work,” Kudlow said. “Why can’t we get some unemployment assistance here? We did it by executive order but that money’s gonna run out. Why can’t Congress quickly pass a bill?”

Kudlow said Democrats are “holding out, frankly, for some political wish lists they know that senators and the GOP are not going to buy into it.”

Pelosi, for her part, said, “I do believe that both sides want to reach an agreement. I can’t answer for the disarray on the Senate side.”