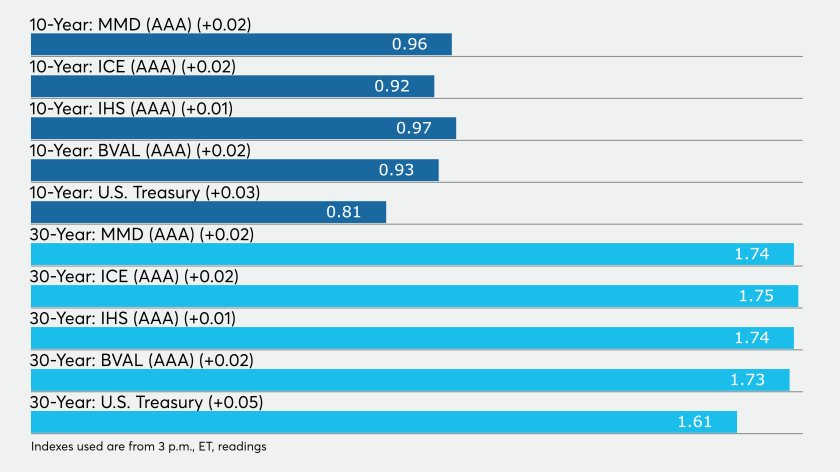 Municipal bond buyers saw a treasure trove of new deals swarm into the market Tuesday as the states of Illinois, Wisconsin, Nevada and Washington all sold bonds in the competitive arena.

In secondary trading, municipals turned weaker, with yields on the AAA scales rising by as much as two basis points on some longer-dated maturities.

“Tax-exempt bond yields in seven-years and longer edged higher by one to two basis points on Tuesday as increasing stimulus hopes boosted the risk-on bias in equities at the expense of U.S. Treasuries and other related bond markets,” said Greg Saulnier, Refinitiv MMD managing analyst. “In the backdrop, stocks got a boost after House Speaker Nancy Pelosi said the White House had ‘come a long way’ with regards to stimulus negotiations and downplayed the Tuesday deadline.”

Meanwhile, muni market participants are focused on the Nov. 3 elections, said Municipal Market Analytics Partner Matt Fabian, and specifically what that means for supply is that states and localities are looking to firm up their new-issue plans before that date.

“The current 30-day calendar is outstripping prior-year averages, fueled by taxables,” Fabian wrote in a Tuesday market report. “Year-to-date issuance (inclusive of bonds, notes, and corporate-tickered municipals) is ~13% ahead of last year, but tax-exempt issuance alone is ~13% behind.”

He said the rise of taxables has been a phenomenon for tax-exempts — new issuance has been more than accounted for with reinvestment and fresh capital while taxables have attracted relatively more energy away from the normal flow.

He noted that the dollar amount of par traded per dollar of primary market par is at a multi-year low.

Sycamore Advisors was the financial advisors. Chapman and Cutler and Burke Burns were the bond counsel.

Proceeds will be used for various general governmental purposes. State officials acted as the financial advisor; Foley & Lardner was the bond counsel.

Piper Sandler and Montague DeRose & Associates were the financial advisors. Foster Garvey was the bond counsel.

Proceeds will be used to refund some outstanding obligations and commercial paper notes and finance certain city improvements. PFM Financial Advisors and TKG & Associates were the financial advisors. Bracewell, West & Associates and Dallas officials were the bond counsel.

Activity was modest Tuesday, according to Amy Raymond, manager of the fixed income department at Cumberland Advisors in Sarasota, Fl.

“Tomorrow looks to be a large tax-exempt new issue day,” she said, with the pricing of the $1.5 billion Illinois Commonspirit Health deal on Wednesday and the $1.9 billion Sutter Health deal on Thursday — both being priced by Morgan Stanley and both in the triple-B rating category, which might carry slightly attractive yields.

Meanwhile, Hawaii took indications of interest on its $900 million taxable portion of general obligation bonds Tuesday, while also conducting the first day of the retail order period on the $147.15 million tax-exempt series — both of which were too early to gauge the outcome, according to a New York trader.

Fitch Ratings downgraded Hawaii’s $7.7 billion of GOs and issuer default rating to AA from AA-plus and revised the outlook on the GOs to stable from negative just after the state loosened travel restrictions for visitors.

The New York trader said he didn’t expect Hawaii’s downgrade to have much of an impact on the pricing other than five basis points cheaper. The downgrade was largely expected by the market and didn’t come as a surprise ahead of the deal’s pricing this week, he said.

With billion-dollar deals expected to price on Wednesday and Thursday, investors were “starting to take chips off the table and wait” for those deals to arrive, according to the trader.

Christine Albano contributed to this report.