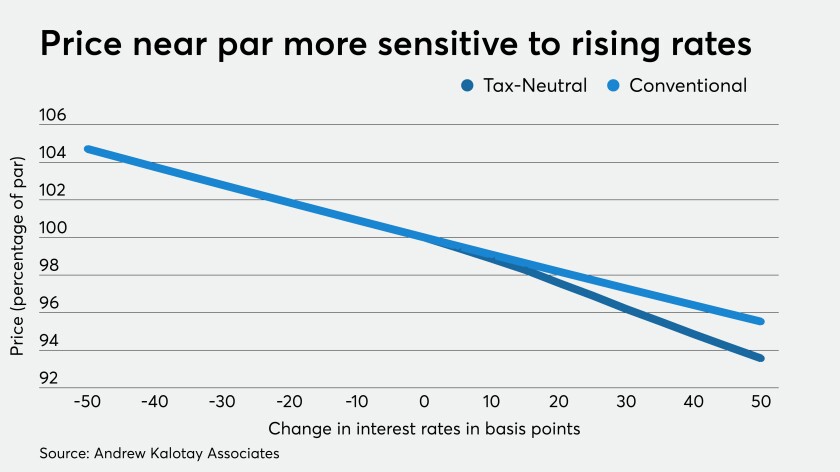 Duration is the primary measure of interest rate sensitivity — it is the percentage change in price for a 1% change in interest rates. However, practitioners also look at convexity, which is the sensitivity of duration to changes in rates. In layman’s terms it captures the asymmetry of price response to rate movements. When the upside is greater than the downside, convexity is positive. When the opposite is true, it is negative.

Optionless taxable bonds exhibit positive convexity, independent of the level at which they happen to be trading. In contrast, a callable bond trading near its call price is the textbook example of negative convexity — it has limited potential to appreciate, but can take a big hit if rates rise.

How about munis? Well, it turns out that all tax-exempt munis exhibit negative convexity near par, even if they are not callable. The driver of this phenomenon is the so-called de minimis tax effect. If a muni is purchased at a discount, the gain at maturity is taxable. The chart beow shows that, due to this effect, a rise in rates causes the ‘tax-neutral’ price of a 2% 10-year muni to fall much further than estimated by conventional analytics. The lower tax-neutral price accounts forboth the rise in rates and the tax liability of the next buyer.

On the flip side, the rally in bond price for a commensurate fall in rates is smaller in magnitude, because there is no tax effect. For example, starting with a price of 100, a 50 basis point rise in rates reduces the price by 6.43 points to 93.57, while a similar decline in rates increases it by only 4.71 points to 104.71 — hence, the negative convexity.*

Tax-neutral duration captures the de minimis effect quite dramatically. As the graph below shows, conventional duration misses the mark widely when the price is in or approaching discount territory. Although the correct duration of a 2% 10-year muni selling at a discount is roughly 14 years, conventional analytics indicate it to be only about nine years, the same as that of a similar bond selling at a premium.

The graph below displays the convexity of our 10-year 2% muni near par (calculated by shifting the yield curve 30 basis points). Above 103 the convexity is roughly 1.0, and then it begins to decline, turning negative around 102. As the price approaches par from above the convexity becomes more negative, and it bottoms out at around 99, at a -12 level. Below 99, convexity begins to increase, turning positive around 96, and eventually flattening at a level of about 3. If the price is sufficiently far from par, the convexity behaves as would be expected for any other optionless bond. Would you have expected a mundane muni to behave so remarkably?

What are the implications of our findings for portfolio managers? First of all, they should realize that conventional ‘taxable’ OAS analytics fail to account for de minimis — a tax parameter for OAS is unlikely to be found on standard platforms. Consequently, they underestimate the duration of discount munis, and they do equally badly with convexity. As shown below, they completely miss the negative convexity near par, and also underestimate it for prices well below par.

What are the implications of the above for risk management?

The percentage change in the price (ΔP/P) of a bond due to a change in interest rates (ΔY) is about equal to:

Conventional OAS underestimates duration for par and discount munis, and near par has the wrong sign for convexity! Both these errors reduce ∆P/P, and result in underperformance, relative to investors’ expectations, when rates rise.

Tax-neutral OAS provides a superior estimate of the price sensitivity of municipal bonds. However, the negative convexity near par still poses a dilemma for bond managers: tax-neutral duration dramatically increases the accuracy of the forecast (relative to conventional duration) when interest rates rise, but overestimates the price change when rates fall. In fact, conventional duration and convexity measures do well when the price is above par and there is no tax effect, as is the case in this example when rates fall.

So, what’s a portfolio manager to do?

Ideally, measure and adjust often. Fortunately, interest rates don’t typically move in large steps in short periods of time, so portfolio duration can be adjusted to that of the benchmark at smaller interest rate intervals, to incorporate the changing potential of the de minimis tax effect. By measuring frequently, the de minimis tax effect can be kept in line with market levels, and portfolios can better track their desired targets, thus sharply reducing performance erosion from measurement error.

For example, the 10-year optionless bond above would rally only 4.71% if rates fell 50 basis points, but based on its tax-neutral duration and convexity at the time, an investor would expect it to have rallied 5.09%— an error of 0.38%. If the interest rate sensitivity had been re-estimated for every five basis points decline in yield, this error term would have been reduced to within a few pennies.

For mutual funds and ETFs, where there is a constant flow of cash, making small adjustments to portfolios to keep them in-line with their benchmarks is routine. But frequent rebalancing doesn’t always make sense for portfolios without cash flows for two reasons: 1) high transaction costs, and 2) capital gain/loss realization. For example, smaller separately managed accounts usually don’t have the benefit of consistent cash flows and face higher transaction costs than larger portfolios. For these portfolios, interest rate sensitivity should be measured using longer-term expected rate changes with the tax-neutral OAS methodology. Using a scenario-based approach also allows investors to express their interest rate outlook.

In our 10-year optionless bond example, a duration of roughly nine years is best if interest rates decline 50 basis points, while 14 is best if rates rise equally. If an investor believes a rise in rates is twice as likely as a decline, a weighted average duration of 12.3 years would be an appropriate measure.

Due to the de minimis tax, municipal bonds have negative convexity near par (or near their OID basis for original issue discount bonds). Because the price sensitivity in this region changes so dramatically with interest rates, it poses a significant challenge for investors. To accurately anticipate the potential price movement, interest rate sensitivity should be measured frequently, and with tax-neutral analytics to get it right.