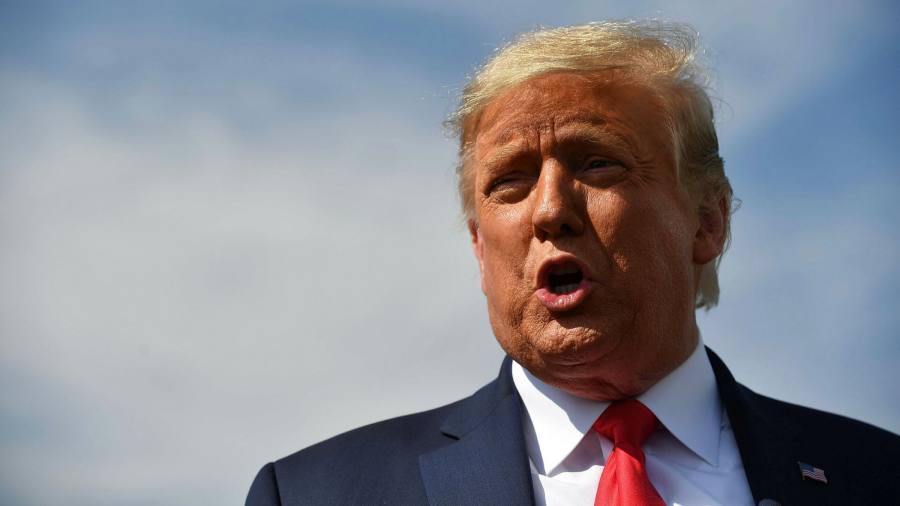 Donald Trump lashed out at Anthony Fauci, the US’s leading infectious disease expert, calling him a “disaster” as the president attempted to defend his handling of the pandemic with just two weeks until the election.

In a call with campaign aides on Monday, Mr Trump played down the severity of the pandemic, which has killed almost 220,000 Americans, and said the public was tired of hearing of warnings from scientists.

“People are tired of listening to Fauci and these idiots,” Mr Trump said, according to recordings of the call played in US media. “Every day he goes on television, there’s always a bomb, but there’s a bigger bomb if you fire him . . . Fauci is a disaster.”

His comments came the morning after Dr Fauci, a top White House coronavirus task force member, told CBS television that he was not surprised Mr Trump had caught Covid-19.

Dr Fauci told the weekly news show 60 Minutes that he had been concerned about the White House’s decision to hold a gathering last month to announce Amy Coney Barrett as Mr Trump’s nominee for the Supreme Court. 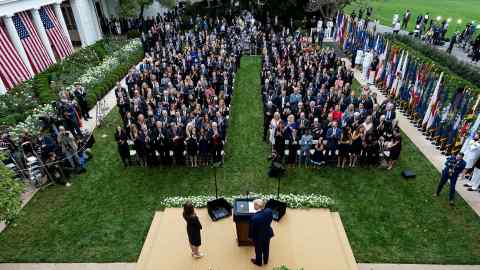 Several who attended the event, including two senators and Chris Christie, the former Republican governor of New Jersey, contracted the disease. There was no social distancing at the event and very few attendees wore masks.

Mr Trump’s decision to publicly criticise Dr Fauci, who polls shows continues to enjoy bipartisan support nationwide, comes as the US is suffering through its third spike in new coronavirus cases since the pandemic began.

More than a dozen states, mostly in the Midwest, have reported their highest level of coronavirus hospitalisations in the past week, according to Financial Times analysis of Covid Tracking Project data.

Last week, the number of coronavirus patients in US hospitals topped 37,000 for the first time since a summer outbreak in late August, but that had eased back to just over 36,400 as of Sunday.

Hours after hitting out at Dr Fauci on the campaign call, Mr Trump took to Twitter to continue his criticisms against the 79-year-old, who has protection from the secret service because of threats he has received over his stance on Covid-19.

“Fauci says we don’t allow him to do television, and yet I saw him last night on @60Minutes, and he seems to get more airtime than anybody since the late, great Bob Hope,” Mr Trump tweeted en route to Arizona for a rally, referring to the late comedian.

Trump vs Biden: who is leading the 2020 election polls?

In recent months, Dr Fauci has been partly sidelined from the task force, as Mr Trump has relied on advice from Scott Atlas, a neuroradiologist with little experience in infectious diseases who has alienated many of his colleagues by pushing a “herd immunity” strategy.

Two dozen states — including 12 in the Midwest — have reported their highest seven-day average case rate of the pandemic at least once during the past week, according Covid Tracking Project data as of Sunday.

Wisconsin, which has emerged as one of the hardest-hit states in the new outbreak, reported 3,777 new cases on Monday, near the record one-day highs the state tallied late last week and sharply higher than the 1,956 recorded a week ago.

Separately on Monday, the Trump campaign accused the commission that oversees presidential debates of catering to Mr Biden after the moderator announced she would ask the candidates about a variety of issues rather than focusing solely on foreign policy.

The Trump campaign also raised concern about changes to the debate rules under consideration, which some Democratic operatives have said should include a mechanism to cut the microphone of either candidate to prevent interruptions.

Mr Trump pulled out of the second presidential debate after the commission changed the format to a virtual event because the president had contracted Covid-19. The debate on Thursday in Nashville, Tennessee, will be the last time that the two men meet before the election on November 3.