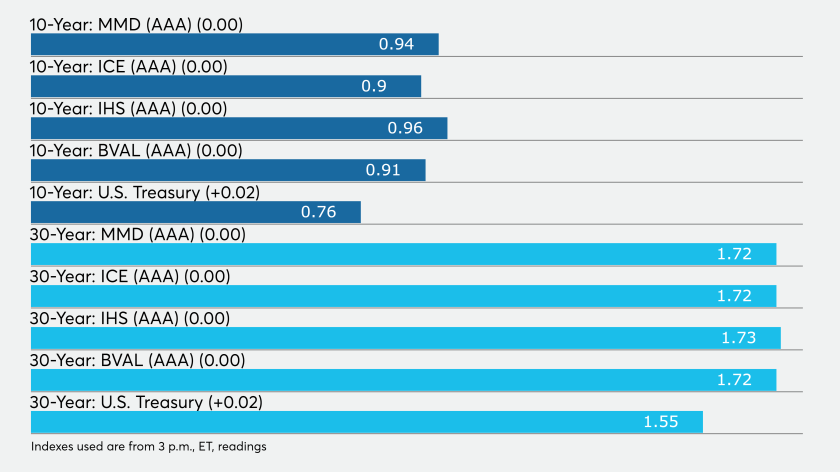 It was all about the states Monday as the municipal market saw Hawaii’s rating get slashed ahead of its GO sale on Wednesday while Illinois, Wisconsin and Nevada prepared to competitively sell bonds Tuesday.

In secondary trading, municipals were little changed Monday, with yields on the AAA scales remaining mostly steady on the long end while short maturities came under some pressure.

Looking at the bigger picture, investors kept both eyes on Washington as talk of a stimulus package was bandied about by politicians on both sides of the aisle.

Last week’s failure to decide on the size or direction of a new round of federal stimulus had varying impacts on the fixed-income market, according to Eric Kazatsky, senior municipal strategist at Bloomberg Intelligence.

“As equity buyers flick on the risk-off switch, U.S. Treasuries have become better bid and have contributed to the slight yield reductions, especially on the long end of the curve,” Kazatsky said. “However, municipals can’t seem to make up their minds whether less stimulus is a terrible thing, or perhaps forced austerity measures on state and local governments — in the absence of more federal aid — could be what the doctor ordered.”

He said the lack of direction in tax-exempts has added to the lackluster technical background as munis face a month of possible negative performance.

“The tax-exempt asset class has a bunch of unkowns coming up that are tough to quantify and could affect how the sector is valued, all while taxable munis eat away at the market core,” Kazatsky. “But it’s 2020, and things aren’t meant to be easy or certain. What we’re able to say with some certainty is that, at current levels, tax-exempt bonds are definitively cheaper than their U.S. Treasury counterparts and hold that distinction not just for top tax-rate payers, but even down to the 24% bracket.”

While 37% is the current top federal tax rate, many at this level have deductions that will allow them to end up in a much lower bracket. This combined, with W-2 earners, who are limited in deductions but still remain in the 24% bracket, widens the applicable range of investors for whom municipals may make sense.

But even as investors remained very cautious over a new stimulus deal, their optimism drove positive muni performance across the board last week, according to Wells Fargo Securities.

“Taxable munis outperformed tax-exempts by 20+ basis points week over week and should continue to outperform in the absence of another stimulus deal with more muni aid,” Huang said.

Fitch cuts Hawaii to AA ahead of sale
Fitch Ratings said it downgraded the state of Hawaii’s $7.7 billion of general obligation bonds and issuer default rating to AA from AA+ and revised the outlook on the GOs to stable from negative just after the state loosened travel restrictions for visitors.

The cuts come ahead of this week’s $1.05 billion GO bond deal consisting of $900 million of taxable GOs and $147.15 million of tax-exempts. BofA Securities is expected to price the Hawaii bonds on Wednesday; Fitch assigned the deal a rating of AA.

“The downgrade of the state’s IDR and GO bond rating to AA from AA+ reflects the outsized impact of the coronavirus pandemic on Hawaii’s economy and workforce, particularly its large leisure and hospitality sector,” Fitch said. “The sudden economic shock brought by the pandemic and the subsequent severe recession is well beyond the routine cyclicality faced by state governments and reflected in IDRs.”

Fitch said the state has a track record of very strong operating performance but that its ability to absorb the economic shock and maintain financial resilience will be tested by the duration of pandemic-related disruptions and the eventual strength of the state’s recovery, which the agency said it expects will take many years.

Primary market
This week’s volume is estimated at $16.4 billion in a calendar made up of $10.5 billion of negotiated deals and $5.9 billion of competitive sales. The slates consists of $11.2 billion of tax-exempts and $5.2 billion taxables.

Underwriters and traders said the timing of another record week of supply will come at a questionable time ahead of the Nov. 3 elections.

“There’s a little caution and uncertainty out there,” a New York underwriter said on Monday, noting that general credit issues are also hampering some issuers coming to market.

“It will be a tricky week,” he added. “We have our work cut out for us with this virus and the vaccine,” the underwriter said, noting the municipal market saw yields cut slightly on the front end on Monday.

A large competitive and negotiated calendar this week and a ton of money in the market will make it a Catch 22, according to the underwriter.

there is also some resistance.

“Some people are sitting back ahead of the election,” as evidenced balances from last week’s deals as well as overall low yields. “It could be trouble, but we have seen this amount of volume in the past and the market absorbed it well.”

Still, he said the unsold balances from last week combined with the mammoth supply again this week “could make it interesting” for dealers this week — especially because there is a dichotomy at work on the buy-side community.

“These rates are not attractive for retail,” he said, adding that institutions are flush with cash and have to spend reinvestment cash on new paper.

“There are a lot of questions and uncertainty out there with the election so close,” he said. “Some people are talking about higher rates and some are saying the economy is terrible.”

A New York trader agreed there are some investors on the sidelines due to uncertainty.

“There are a lot of people sitting tight heading into tomorrow and the rest of the week,” he said Monday, adding that investors are defensive and some deals are getting “spotty” interest.

Last week’s slate did “pretty well,” he said, but some dealers held onto some balances.

He said this week will be one of the heaviest weeks of the year as dealers are trying to get into the market ahead of the election.

“It’s a tough time right now as a lot of deals are getting through the door,” he said, noting that the top deals this week are taxable.

The $1.9 billion Sutter Health deal on Thursday and the Commonspirit Health deal on Wednesday are both being priced by Morgan Stanley and are both in the triple-B rating category, which might carry attractive yields, the trader said.

“It will be a tricky week with the amount of supply and deals out there,” he said. “People are trying to be conservative as they approach the marketplace.”

In the competitive arena on Tuesday, three states are in focus.

Sycamore Advisors is the financial advisors. Chapman and Cutler and Burke Burns are the bond couinsel.

Wisconsin (Aa1/AA+/AA+/) is selling $228.215 million of Series 2020B GOs. Proceeds will be used for various general governmental purposes. State officials are acting as the financial advisor; Foley & Lardner is the bond counsel.

Other issuers are not left out on Tuesday either.

Proceeds will be used to refund certain outstanding bonds. Davenport & Co. is the financial advisor; McGuireWoods is the bond counsel.

Proceeds will be used to refund some outstanding obligations and commercial paper notes and finance certain city improvements. PFM Financial Advisors and TKG & Associates are the financial advisors. Bracewell, West & Associates and Dallas officials are the bond counsel.

The TFA also plans to competitively sell on Oct, 28 around $200 million of taxable fixed-rate bonds. Proceeds will be used to fund capital projects and convert certain floating-rate debt to fixed-rate debt.

Some notable trades on Monday:

Understanding Your Clients: How To Work With Different Personalities
WHO advises against prescribing remdesivir to Covid patients
David Dinkins, New York’s first Black mayor, dies at 93
Do Private Real Estate Investors Have A Social Responsibility To Help Renters?
Here Are The Top Holiday Design Trends Of 2020