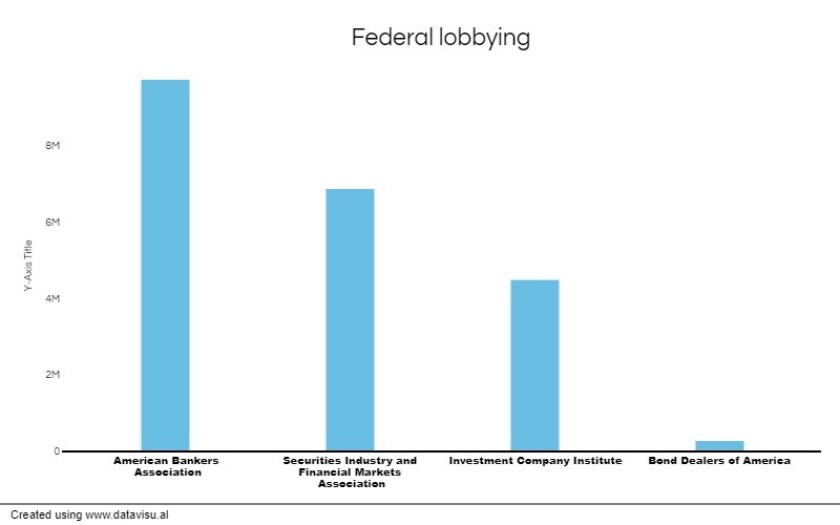 The majority of the spending, revealed by public disclosure reports, was $21.36 million devoted to lobbying members of Congress and federal agencies over the 12 months that ended June 30.

The other $5.79 million has been donated to national campaign committees and individual candidates for the Senate and House during the 2019-2020 election cycle.

The lobbying disclosure reports filed with the Office of the Clerk of the U.S. House of Representatives show that the American Bankers Association spent $9.73 million for the year that ended June 30 followed by the $6.87 million spent by the Securities Industry and Financial Markets Association.

The Investment Company Institute spent $4.49 million on federal lobbying over the same period followed by the $273,800 spent by the much smaller Bond Dealers of America.

Third quarter lobbying reports for the period ending Sept. 30 are not due until Oct. 20.

On the campaigns and election front, ABA’s political action committee was the biggest player as well, spending $3.675 million through Sept. 30, according to the nonpartisan Center for Responsive Politics’ OpenSecrets website. The ABA PAC also had $1.8 million in unspent cash as of that date.

These reports on lobbying and congressional campaigns highlight the high stakes for the municipal finance, securities and banking industries in this year’s elections.

For the public finance sector, a Democratic sweep in Congress and the White House could usher in legislation in 2021 to restore tax-exempt advance refundings, expand the use of private activity bonds and bring back an updated version of Build America Bonds.

But for the banking and securities industries it also could mean a new wave of federal regulations and additional consumer protections.

The other possibility is another two years of split government in which a Republican-controlled Senate, regardless of who occupies the White House, will continue to balk at legislation passed by the Democratic-controlled House.

Here’s a more detailed look at how these four industry groups have been spending on lobbying and elections.

SIFMA reported spending $6.87 million on lobbying for the 12 months ending June 30 by more than a dozen of its employees, including President and CEO Ken Bentsen and Managing Director and Associate General Counsel Leslie Norwood.

SIFMA said it lobbied on 49 specific issues and pieces of legislation with both chambers of Congress, the Treasury, the National Economic Council, Federal Deposit Insurance Corporation, the Office of the Comptroller of the Currency, Federal Reserve System, Ginnie Mae, the Federal Housing Finance Agency, and the U.S. Securities and Exchange Commission.

Among those issues were the transition away from Libor; the SEC’s proposed order exempting Municipal Advisors acting as placement agents; S. 1236, the Municipal Securities Rulemaking Board Reform Act of 2019; and H.R. 3967, Municipal Bond Market Support Act of 2019.

Other parts of the lobbying disclosure report disclosed tax code lobbying regarding proposals to expand private activity bonds; the municipal finance provisions in the Moving Forward Act; the advance refunding provision by Sen. Roger Wicker, R-Miss., in the LOCAL Infrastructure Act and on S.4203; the American Infrastructure Bond Act.

SIFMA’s election donations include $20,000 to the National Republican Senatorial Committee and two donations of $15,000 to the campaign committees for Senate Democrats and House Democrats.

Two other donations of $10,000 each went to the Congressional Black Caucus and the Blue Dog PAC representing conservative Democrats.

The campaign committees for individual members of Congress received $317,000 from SIFMA that was split between $100,000 to senators and $217,000 for House lawmakers.

In the House, the top recipient was Rep. Patrick McHenry of North Carolina, the ranking Republican on the Financial Services Committee, with $9,000 while the chairwoman of the committee, Rep. Maxine Waters, D-Calif., did not receive a campaign donation.

Michael Decker registered as a lobbyist with the Bond Dealers of America as a client effective April 1, 2019.

Decker reported that he was paid a total of $141,800 by BDA through his company Public Policy Solutions for 11 months between April 1, 2019 and Feb. 29, 2020 when the relationship was terminated.

The next day, Decker began working as an employee of BDA and an in-house lobbyist with the title of senior vice president for research and public policy.

While working as an outside lobbyist for BDA, Decker reported lobbying on the dealer disintermediation regulation, FINRA Regulatory Notice 19-12, MSRB Rule G-23, SEC Rule 15c2-12, GSE reform, and the role of municipal advisors in private placements. He also reported lobbying on preservation of the tax exemption, advance refundings and on bank qualified bonds.

In addition, BDA reported spending $132,000 in the second and fourth quarters of 2019 for in-house lobbying by four employees, two of whom no longer work for the organization. One of the in-house lobbyists was BDA CEO Michael Nicholas.

Through June 30 the Bond Dealers of America reported spending $15,500 of the $21,350 in donations it received by its political action committee, of which $10,500 was itemized as donations to House candidates.

BDA split its campaign donations between two Democrats and four Republicans, all of whom are incumbents. Republican Reps. Andy Barr of Kentucky and Blaine Luetkemeyer of Missouri each received $2,500 as did Democratic Rep. Gwen Moore of Wisconsin, who is a member of the Ways and Means Committee.

The Investment Company Institute reported spending $4.49 million on Washington-related lobbying over the 12 months ended June 30 by a handful of employees.

Issues ICI lobbied on included retail investor access to private offerings, the Heroes Act passed by the House in May, and the Mutual Fund Litigation Reform Act authored by Rep. Tom Emmer, R-Minn., that would raise the bar for lawsuits against mutual funds to be considered by the courts.

The Investment Company Institute PAC spent $1.63 million with just over $1 million funneled into campaign donations to 41 senators and 164 House members.

The largest Senate donations were $15,000 each to Republican Sen. Steve Daines of Montana and Democratic Sen. Gary Peters of Michigan, who are both in close re-election battles.

Most of the Senate donations — $89,500 — went to Republicans who have majority control while Democrats received $60,000.

In the House, the ICI also favored Republicans although they are widely expected to continue in the minority. Republicans received $485,000 in donations compared to $384,750 for Democrats.

The largest House donation was $20,000 to the re-election campaign of Republican Rep. Devin Nunes of California.

There also were 22 donations of $10,000 each that went to 20 Republicans and Democratic Reps. Carolyn Maloney of New York and Ron Kind of Wisconsin.

Several of the $10,000 donations went to members of the House Republican leadership, including Republican Minority Leader Kevin McCarthy of California and Minority Whip Steve Scalise of Louisiana.

The American Bankers Association PAC spent $3.675 million on elections through Sept. 30 and still had $1.8 million in unspent cash.

ABA also gave more to Rebublican senators with $189,500 in donations compared to $42,500 for Senate Democrats.

The largest Senate donations were $20,000 each to four Republicans and one Democrat.

Republican Sens. Tom Cotton, R-Ark., Cory Gardner, R-Colo., and Martha McSally, R-Ariz., each received $20,000 as did Republican Rep. Roger Marshall who is running for the open Senate seat in Kansas.

The lone Democrat to receive that amount was Sen. Gary Peters of Michigan.

The ABA reported spending $9.726 million on federal lobbying over the 12 months that ended June 30.

Sixteen employees were listed on the most recent quarterly report as lobbying Congress and federal agencies on numerous banking, credit and consumer protection issues.