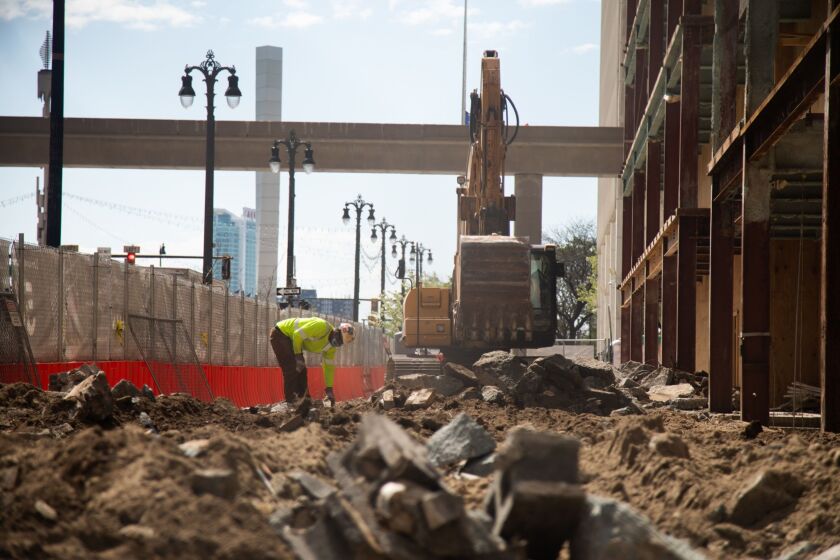 Detroit will sell its second, post-Chapter 9 stand-alone general obligation issue Thursday with plans to return in the coming months should voters approve $250 million of bonding authority for blight removal next month.

“The proceeds will finance recreation and museums, public safety and transportation projects in accordance with the prior voter authorizations,” John Naglick, Detroit’s chief deputy financial officer, said in an email. “It is a stand-alone unlimited tax general obligation just like the $135 million issued in December, 2018.”

The 2018 sale marked the city’s first stand-alone borrowing without any direct state intercepts or support since it emerged from Chapter 9 bankruptcy in 2014. The 10-year maturity in the junk-rated deal landed at 4.45% yield, a 202 basis point spread to Refinitiv Municipal Market Data’s AAA benchmark, and the 20-year landed at 4.95% yield, a 198 basis point spread. The city shed $7 billion of its $18 billion of bonded, pension and other debts through its bankruptcy with bondholders taking big hits.

While the city has garnered a series of rating upgrades over the last few years as it adopted balanced budgets and built reserves, the ratings remain three notches below an investment grade level and the COVID-19 pandemic’s fiscal wounds threaten near-term progress.

The new-money sale has long been in the works and the city doesn’t believe the pandemic pressures should hold it back given that capital spending is considered critical to economic growth and rating upgrades.

“We have been planning for quite some time to do this before the end of the calendar year. It is important for us to continue to fund the city’s capital agenda in these critical areas to continue to provide quality services to our residents,” Naglick said.

If voters approve the blight issue on the November ballot, the city would return with a roughly $175 million UTGO issue in late 2020 or early 2021. Longer term, the city would tap another $50 million of the blight authority in 2022 and then would plan on selling $80 million for capital work in 2023 although it would require voter approval for about half that as well as projected $70 million issues in 2025, 2027, and 2029.

No tax increases would be required as “projections show continued capacity for capital investment without raising the debt millage” with only inflationary growth projected and no additions to the tax base, the city tells potential investors in a presentation. The city’s debt policies outline targeted and maximum caps tied to expenses and funding capital within the current debt millage so as not to raise taxes.

Given the market’s low rates and city’s needs the timing makes sense, said Howard Cure, director of municipal bond research at Evercore Wealth Management. “It’s important for the long term viability of the city,” he said of the capital spending.

Cure said he was impressed with Mayor Mike Duggan’s quick action to tackle the pandemic driven deficits and the review commission continues to “look over their shoulder.” The downside for the city is the risk of piling on “fixed costs to a tight budget.”

“There’s demand for higher-yielding paper” so the city will find a buy side audience with investors doing their own deep dive into the city’s financials, Cure said.

The rating agency moved the outlook to negative in April due to the growing revenue wounds from the COVID-19 pandemic and strains they pose to the city’s ability to keep the books balanced — a status needed to prevent a move back to state fiscal oversight.

The Detroit Financial Review Commission signed off on the $80 million transaction in August. It retains some limited post-bankruptcy oversight of city finances but if the city doesn’t maintain balanced operations it could return to more stringent management for three years.

JPMorgan and Siebert Williams Shank & Co. LLC are senior managers with JPMorgan running the books. Public Resources Advisory Group is advising the city and Miller Canfield is bond counsel. The deal has serial maturities through 2040 and term bonds in 2045 and 2050.

The finance team has been conducting investor outreach and is highlighting the city’s quick action to deal with the pandemic’s blows and the resumption of major projects planned by the auto industry, for housing and other construction work since Gov. Gretchen Whitmer lifted restrictions in May.

The city initially projected a roughly $348 million shortfall in fiscal 2020 and 2021 due to the pandemic and recession’s revenue blows but that grew to about $410 million over the summer. The city has closed the gaps through the use of reserves, layoffs, the suspension of some raises, using CARES Act funds for reimbursable expenses and other curbs on spending and savings and cuts. The city ended fiscal 2020 with an unassigned fund balance of $84 million, down from the prior year’s $123 million.

A $30 million gap is projected for fiscal 2022. The city’s liquidity remains healthy $1.2 billion in cash available as of July 2020 compared with $1.3 billion at the same time last year.

While the city moved quickly some of the measures have consequences. “To balance budgets, officials approved large draws on available reserves, much of which were already budgeted or planned to be spent on one-time capital, blight removal, or pension and reserve set-asides,” S&P said.

Moody’s offered a more positive assessment. “The positive outlook reflects the city’s early and significant response to projected revenue declines. The city’s rating is likely to move upward if it emerges from the recession with only a minimal draw on reserves and moderate increases in debt.”

But Moody’s also warned of risks ahead. “A second shutdown would hit the city hard. The city’s significant service and capital needs have not gone away. Even in a scenario of steady recovery, further action will be needed to close out-year budget gaps and to accommodate growth in pension costs in the budget,” Moody’s said.

Gaming taxes make up 13% of city revenues which are expected to fall by 50% loss in fiscal 2021 while income taxes make up 25% and both are especially susceptible to economic conditions.

The city lays out potential landmines ahead including state budget pressures that could cause the state to cut local aid after holding it steady this year, rising COVID-19 caseloads that could drive a second economic shutdown, and long-term consumer behavioral changes.

Post-pandemic, pensions remain the city’s most pressing strain. The city carries net pension liabilities of about $1.6 billion with funded ratios in the 70% range. The city’s 2014 plan of adjustment gave the city breathing room with help from the state and private entities until 2024 when an estimated $170 million payment is owed. City officials recently warned it could rise to $200 million due to the pandemic’s impact on investments.

The city has built up $185 million in a Retiree Protection Fund to offset the impact on the operating budget. The fund is on track to reach $355 million by 2024 between scheduled deposits and supplemental ones.

If voters approve the blight borrowing known as Proposal N, the city would save 8,000 homes and demolish another 8,000 over five years. The plan calls for unlimited tax general obligation borrowing with 64% sold as tax-exempt and the other 36% as taxable to maintain flexibility in what the city eventually does with the rehabilitated properties.

The city has demolished 21,000 vacant and uninhabitable homes since 2014 and saved another 8,000, with 22,000 vacant houses still remaining that need to be addressed, including 14,000 in need of demolition.