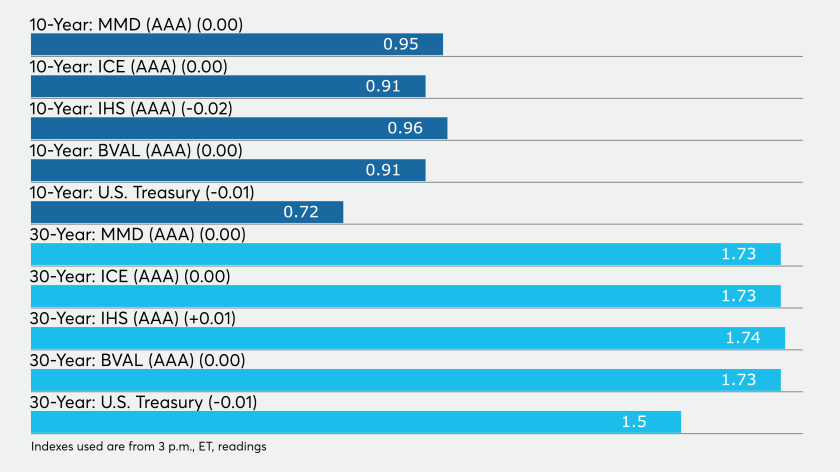 Municipal bond buyers got a taste of this week’s healthy new-issue slate from diverse issuers on Wednesday. Municipals remained steady, with yields little changed across the AAA scales.

CUSIP Global Services said requests for muni identifies surged 18% in September, an indicator that bond volume will increase in the last quarter of 2020.

President Donald Trump gave an address on the economy before the economic Club of New York on Wednesday morning. Speaking via webcam from the White House, Trump said infrastructure would be a top priority in his next term if he is re-elected next month.

“We actually have [an infrastructure] plan now, but we’re going to make it make it much bigger … We want to re-do our roads, our highways, our tunnels, our bridges — some are unsafe. It’s going to be an absolute priority.”

The president didn’t give any specific details of his new and bigger plan ahead of the Nov. 3 election.

The Volcker Alliance and the Penn Institute for Urban Research said the American Road & Transportation Builders Association estimates that at least $10.9 billion of state and local transportation projects have been delayed or cancelled so far this year and that $141 billion of funding initiatives or ballot measures have been vetoed, cancelled or postponed.

The organizations will be holding a webinar Thursday on “State and Local Infrastructure Spending Cutbacks Amid the COVID-19 Recession.”

Kim Olsan, senior vice president at FHN Financial, said that ahead of the Presidential election, the market is moving into a defensive mode.

“Defensive demand is only getting stronger with election uncertainty playing a large role,” Olsan said. “Short-end credit spreads continue to tighten to AAAs, much like firmer levels being paid for optionality. Single-A revenues opened the year trading +11-13/AAAs and widened to +23/AAA during the Spring selloff. Current spreads have moved into the single digits in some cases,” she said.

The market will remain cautious as uncertainty looms over the Nov. 3 election; Trump and Democrat Joe Biden are scheduled to hold competing Town Hall meetings that will be televised on Thursday night at the same time.

Some weakness ahead of deals
“Munis have experienced some weakness due to the elevated expected supply, as issuers come to market prior to the election, along with continuing uncertainty over the economy and a potential stimulus package,” said Dan Urbanowicz, director and senior portfolio manager at Washington Crossing Advisors.

At the same time, the limited window of heavy volume should be beneficial given its timing ahead of seasonal supply and demand challenges, according to Urbanowicz.

“We’re viewing this elevated supply as perhaps the last good buying opportunity before the end of the year as seasonal reinvestment picks up and issuance decreases,” he said.

Though there is caution in the market, as investors are gearing up for the rest of the week’s sizable deals — as well as those expected later in the month — as it continues to stabilize following some recent Treasury weakness.

“The market is still concerned about a stimulus package or lack thereof,” but is looking forward to the supply coming the next two to three days, he said.

While Treasuries were up the last few days, some recent deals were cleaning up “slowly but surely.”

“It feels OK, but nobody is rushing to bid it up,” he said of the secondary market overall. “Some of the supply in the Street is slowly starting to trade up a little bit — especially in New York,” he said, pointing to the Dormitory Authority of the State of New York’s personal income tax bonds, which priced last week.

“The market has a modestly better tone today, which is certainly not indicative of where Treasuries have been the last three days or so,” the trader said, pointing to the weakness on Friday, followed by an unchanged to little weaker on Tuesday.

While “it doesn’t feel like the Street wants to jump in yet,” the trader said “there seems to be more people paying attention” to the primary market this week.

Frasca & Associates and Public Resources Advisory Group are the financial advisors. Norton Rose and Bryant Rabbino are the bond counsel.

On Thursday, Barclays Capital is set to price the City and County of Denver, Colo.’s $705.5 million of taxable and $219.4 million of tax-exempt airport system revenue bonds being issued on behalf of Denver’s Department of Aviation.

It marked the 23rd straight week that the funds saw inflows. In the previous week, muni funds saw a revised inflow of $1.015 billion, originally reported as a $966 million inflow, ICI said.

Long-term muni funds alone had an inflow of $2.086 billion in the latest reporting week after a revised inflow of $996 million originally reported as a $947 million inflow in the prior week.

Taxable bond funds saw combined inflows of $22.542 billion in the latest reporting week after a revised inflow of $3.390 billion in the prior week originally reported as a $3.391 billion inflow.

ICI said the total combined estimated inflows from all long-term mutual funds and ETFs were $7.568 billion after a revised outflow of $9.327 billion in the previous week, originally reported as a $9.396 billion outflow.

CUSIP: Muni requests surge in Sept.
Municipal CUSIP request volume surged in September, according to CUSIP Global Services. Issuance of new security identifiers can be an early indicator of debt activity over the next quarter.

The aggregate total of all municipal securities — including municipal bonds, long-term and short-term notes and commercial paper — rose 18% to 1,647 in September from 1,396 in August.

On an annualized basis, total municipal CUSIP identifier request volumes are up 12.6% to 11,970 through September compared to 10,633 in the same period in 2019.

“Record low interest rates and lingering fears of a possible liquidity crunch throughout most of this year have not materially slowed the pace of new capital creation in the major fixed-income and equity asset classes,” said Gerard Faulkner, Director of Operations for CGS. “While we continue to see month-to-month volatility in CUSIP request volume, the overall direction in U.S. corporate and municipal securities continues to trend positive so far this year.”

Among top state issuers, Texas, New York and California were the most active in September.

On Wednesday, high-grade municipals were unchanged, according to final readings on Refinitiv MMD’s AAA benchmark scale.

Treasuries were stronger as stock prices traded down.