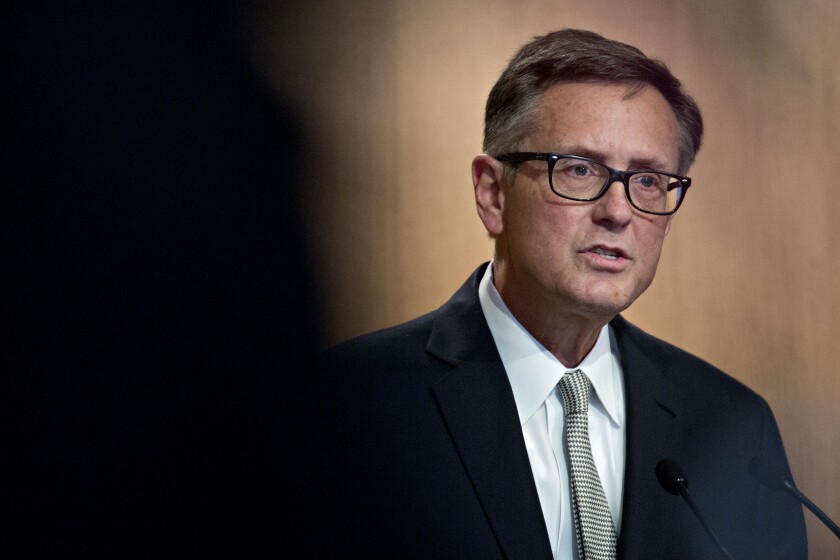 Gross domestic product may not reach its pre-COVID-19 level for a year and the unemployment rate will take longer to fall to where it was, said Federal Reserve Vice Chair Richard Clarida.

The coronavirus-induced “recession threw the economy into a very deep hole, and it will take some time, perhaps another year, for the level of GDP to fully recover to its previous 2019 peak,” he said, according to prepared text of a speech released by the Fed..

“It will likely take even longer than that for the unemployment rate to return to a level consistent with our maximum-employment mandate,” he said. “Following the Global Financial Crisis, it took more than eight years for employment and inflation to return to similar mandate-consistent levels.”

The Federal Open Market Committee’s baseline projections, summarized in the latest Summary of Economic Projections, expects a “relatively rapid” recovery, when compared to the last recession.

“The outlook is unusually uncertain,” Clarida added. “The ultimate course the economy follows will depend on the course of the virus, social-distancing norms, and mitigation efforts put in place to contain it. The median Federal Open Market Committee participant projects that by the end of 2023 — a little more than three years from now — the unemployment rate will have fallen to 4%, and PCE inflation will have returned to 2%.”

While the rebound from the “spring collapse has been robust,” he said, a full recovery “a long way to go.”

“Although the unemployment rate has declined sharply since April, it remains elevated as of September at 7.9% and would be about 3 percentage points higher if labor force participation remained at February 2020 levels,” he said. “Despite a recent uptick, inflation is still running below our 2% longer-run objective.”

Monetary and fiscal efforts to boost the economy will be needed, Clarida said. The Fed is “committed to using our full range of tools to support the economy and to help ensure that the recovery from this difficult period will be as robust and rapid as possible.”

Economists polled by IFR Markets projected each would increase 0.2%.

The final demand index climbed 0.4% for the year ending in September; economists predicted it would be 0.2% higher.

According to Scott Anderson, chief economist at Bank of the West, the “acceleration in core prices shows that producers have been increasingly able to raise their selling prices as the economy recovers from the pandemic shock.”

In addition to topping estimates, he said, “increases were broad-based with both services and goods prices rising by an identical 0.4% as well as a 3.9% advance in the index for hotel services was a major factor in the September rise in prices for producer services, while a 1.2% surge in food prices contributed to the rise in producer goods prices.”