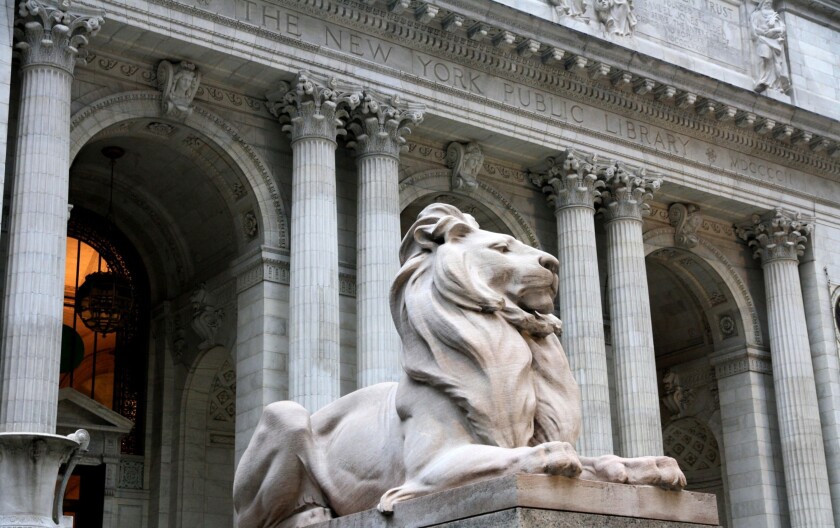 The city’s three public library systems have a capital needs backlog of roughly $1 billion. In addition, the city cut $2.5 billion from the capital budget it passed in June and faces a $9 billion operating gap through fiscal 2021.

Design-build, which combines design and construction bids into one contract, could accelerate smaller projects in particular, library officials said.

“A roof is a roof is a roof,” Iris Weinshall, chief operating officer of the New York Public Library, said on a Center for an Urban Future podcast about the city’s capital construction process. “You don’t need an engineer to engineer each and every roof project.

“We have to be able to use this design-build to be able to move things along on smaller projects so that we’re not sort of stuffing up the system.”

The New York Public Library oversees branches in Manhattan, the Bronx and Staten Island, while Queens and Brooklyn manage their own systems within the city’s umbrella.

Gov. Andrew Cuomo late in 2019 signed the NYC Design-Build Act, extending the option to all city agencies. The city could save up to $400 million in building costs through use of design-build project delivery following state clearance, Mayor Bill de Blasio has said.

Research by CUF has cited months-long delays and cost overruns in library and parks construction.

In January 2019, the city’s Department of Design and Construction began an overhaul to speed up capital projects and cut down on delays.

“This initiative is showing promise. In fact, it’s shaved months off the process,” said Jonathan Bowles, CUF’s executive director. “But it’s also very evident that significant delays and cost overruns continue, and that a lot more progress is needed, and not just by DDC.”

Lorraine Grillo is both DDC commissioner and president of the city’s School Construction Authority. She found DDC much more cumbersome to manage.

“I was amazed at the issues these folks have to confront every single say,” she said. “Part of it led to the blueprint we put together.”

Much work remains, according to Grillo. “Designs are taking just too long.”

“A requirement or a regulation that was designed to save public dollars is having the opposite effect in many cases,” Dvorkin said. “I don’t think this is intuitive for a lot of folks.

“When the lowest bidder is not the most effective bidder, what does it mean for these projects? We’ve heard examples of projects having to change horses in mid-stream. You have trouble with a contractor, you need to switch gears and find somebody else to get the job done.”

“One of the things that we have faced is not just buildings that are 60 years old, but buildings that are ‘Lindsay boxes’ for a lot of us,” said Wolcott, referring to the shoebox-type library construction under Mayor John Lindsay in the 1960s. “As a result, they have outlived their usefulness.

“We’ve seen significant improvement but at the same time we have a long way to go ad understanding that the pandemic is going to interfere with that and the availability of capital dollars,” said Wolcott, who was the city’s schools chancellor from 2011 to 2013 under Mayor Michael Bloomberg.