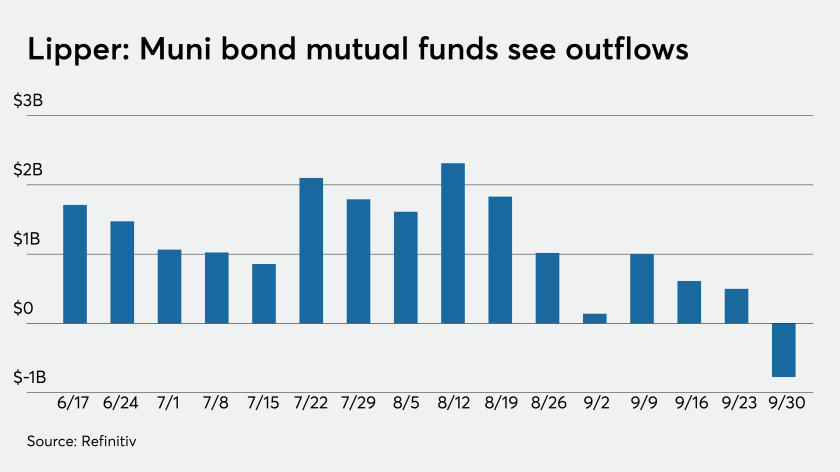 Municipal bond buyers saw some large deals head their way on Thursday as the fourth quarter of 2020 got underway. Muni prices showed little change, with yields on the AAA scales moving up by as much as one basis point on some longer maturities.

“The downgrade reflects the substantial financial challenges New York City faces caused by the economic response to the coronavirus pandemic and our expectation that New York City is on a longer recovery path than most other major cities,” Moody’s said in a late Thursday afternoon release.

In the third quarter, markets saw volatility as COVID-19 and the upcoming presidential election continued to drive uncertainty about an economic rebound, according to Daniel Himelberger, portfolio manager and fixed-income analyst at Cumberland Advisors.

“The net result of the volatility left the Treasury market little changed on the quarter, while spreads on investment-grade corporates and taxable municipals continued to grind lower from the peaks set at the end of the first quarter,” he wrote in a market note Thursday. “As the third quarter ends, the minimal movement in Treasury yields shows a shift to a slightly steeper yield curve, with short-term rates dropping and longer maturities remaining flat to slightly higher in yield for the quarter.”

“The September FOMC meeting was the fourth meeting in a row at which the Committee held the target fed funds rate in the 0–0.25% range and signaled that they expect to hold short-term rates lower for longer,” he said. With the news of short-term rates remaining low, he said an argument can be made for a steeper yield curve moving forward.

“One of the biggest drivers of this argument is the recent uptick in inflation prints, which have temporarily suppressed the need for additional stimulus to the economy from the Fed,” Himelberger said. “The higher inflation and tightening spreads on investment-grade corporates and taxable municipals has led Cumberland Advisors to adjust our strategy and shorten our durations, as we expect higher rates on longer maturities going forward.”

Looking ahead, he said they were watching how COVID-19 and the presidential election in November may shape the U.S. economy.

“Our view is that once we can put COVID-19 and the election behind us, we will see Treasury yields start to increase on the long end as the yield curve steepens,” Himelberger said. “Our goal is to stay flexible while taking a conservative approach to investing in the face of a pandemic that has created new challenges for the investment management process.”

The Florida State Division of Bond Finance was the financial advisor; Squire Patton Boggs was the bond counsel.

The planned offerings include $4.98 billion of new money and $1.3 billion of refundings and reofferings, consisting of:

The calendar includes expected sales by:

All borrowings are scheduled at the request of the issuer and done under their borrowing programs.

The four-week moving average remained positive at $335.309 million, after being in the green at $563.837 billion in the previous week.

The average seven-day simple yield for the 184 tax-free and municipal money-market funds rose to 0.02% from 0.01% in the previous week.

The average, seven-day simple yield for the 775 taxable reporting funds remained at 0.02% from the prior week.

California infrastructure green bonds, 5s of 2021, traded at 0.14%. The State is planning a green bond deal next week with a green label from Nasdaq.

“What this trading shows is the dislocation the market is experiencing. Look at those Monty County GOs. 14 basis points? Cleveland ISDs with a 22 basis point differential?,” a New York trader said. “There are certainly a lot of people making money off of it.”

Lynne Funk contributed to this report.

Homebuilder sentiment sets another record high in October
The Kaufmann Desert House, A Modernist Masterpiece, Is For Sale For $25 Million
‘Please like me’: Trump loses ground with suburban women
Philadelphia 76ers chasing arena after bond-supported bid falters
Hotels on demand: Operators are selling ‘subscriptions’ to lure back visitors