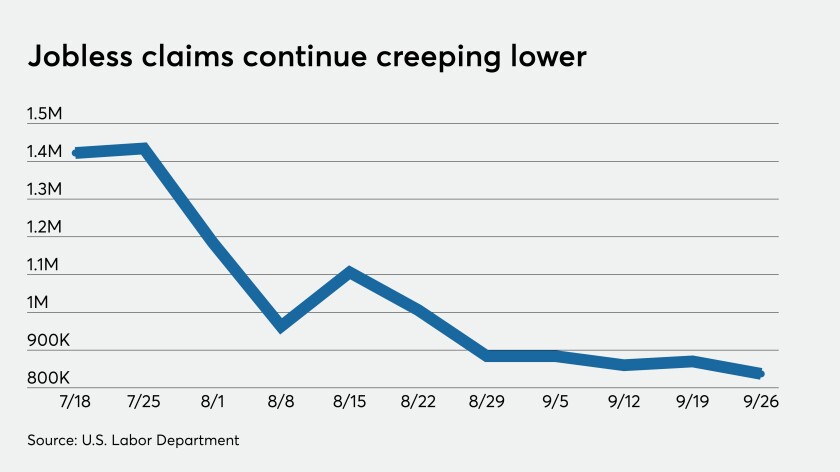 Initial jobless claims declined to a seasonally adjusted 837,000 in the week ended Sept. 26, from the previous week’s upwardly revised level of 873,000, originally reported as 870,000, the Labor Department said Thursday.

Economists polled by IFR Markets projected 850,000 claims in the week.

Economists anticipated continuing claims to come in at 12.250 million.

“Unemployment claims [are] still staggeringly high with some people forced to apply for special pandemic claims as their regular UI benefits expired,” according to Diane Swonk, chief economist at Grant Thornton.

“This marks 28 weeks since the COVID-caused downturn ignited an eruption of historic and, as we see once again, sustained job loss, even as some employers bring employees back to work,” said Mark Hamrick, senior economic analyst for Bankrate. “New unemployment claims in the traditional programs administered by states were down in the latest week, whether looking at the seasonally adjusted or non-seasonally adjusted counts.”

Hamrick noted that Congress and the president managed to approve a continuing resolution to keep the federal government open as the calendar flipped to October, avoiding another “negative headwind” for an already “struggling economy.”

“The pressure remains on elected officials in Washington to move forward on relief legislation to avert more substantial job losses as well as heightened financial pain on the part of unemployed and underemployed Americans,” he said. “At issue is whether the just begun fourth quarter brings a measure of economic stability or greater pain.”

Personal income
Personal income declined 2.7% in August after a 0.5% increase a month earlier, the Commerce Department reported. Personal spending climbed 1.0% in the month after a 1.5% rise in July.

Economists predicted income would slip 2.2% and spending would rise 0.7%.

The personal consumption expenditures price index rose 0.3% in the month, after a 0.4% gain a month earlier, while the PCE core increased 0.3% in August and 0.4% the prior month.

“U.S. consumption increased, bringing its four-month cumulative gain to 18.6%, placing it 3.4% below February’s level,” said Roiana Reid, U.S. economist at Berenberg Capital Markets. “Consumption is on track to increase close to 40% quarter over quarter, annualized in the third quarter, following its 34% quarter over quarter, annualized decline in Q2, and will add significantly to GDP.”

ISM
The Institute for Supply Management’s manufacturing sector index dipped to 55.4% in September from 56.0% in August.

Economists expected the index would rise to 56.2%.

“The recent PMI figure indicates expansion in the overall economy for the fifth month in a row after a contraction in April, which ended a period of 131 consecutive months of growth,” said Timothy R. Fiore, chair of the Institute for Supply Management.

“The ISM manufacturing employment index increased in September, the highest level since July 2019, but its below-50 reading suggests that more firms are cutting jobs than adding them,” Reid said. “Still, based on the sustained, robust improvement in manufacturing activity over the last few months, we expect a solid increase in manufacturing payrolls in the September Monthly Employment Report.