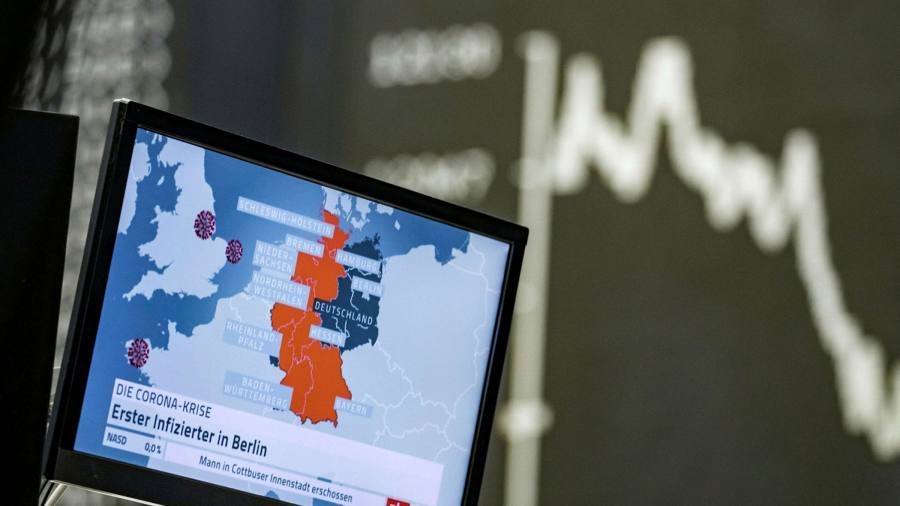 European markets tumbled after sharp rises in coronavirus cases across the continent prompted concerns about new lockdowns, dealing a heavy blow to bank and travel shares.

London’s FTSE 100 was down 3.4 per cent by mid-morning. Shares in British Airways owner IAG declined 15 per cent, while Trainline shares lost 12 per cent and InterContinental Hotels shares slipped 5 per cent.

The Stoxx Europe 600 dropped 2.9 per cent, leaving the continent-wide index on track for the steepest decline since ructions in June. Frankfurt’s Xetra Dax lost 3.3 per cent, while European banks extended last week’s losses to reach their lowest level since May.

The sell-off is “mainly down to what’s happening in terms of Covid-19 and potential second lockdowns”, said Artur Baluszynski, head of research at investment manager Henderson Rowe.

Europe was a “bank-financed economy. If banks are struggling, the economy is struggling. And banks will be if we get another lockdown, or tighter restrictions”, he added. Lenders would be extra cautious about who they lent to in the face of a worsening pandemic, and those that “loaded up” on commercial property before the pandemic were likely to suffer from the decline in the value of office space, he said.

Patrick Vallance, Britain’s chief scientific adviser, warned on Monday there could be 50,000 new infections every day by mid-October if the virus continued spreading at its current rate. New infections in the UK were doubling every seven days, he said.

The decline of travel and leisure shares reflected persistent rises in coronavirus cases around the world and the prospect of tighter lockdown restrictions in countries such as the UK.

“We do expect the pace of recovery to slow over the next several quarters in most if not all economies as the virus spreads faster with the arrival of cold weather in the northern hemisphere, and thanks to a likely halt in US fiscal support until after the election this November,” said analysts at Deutsche Bank.

The US market was tipped to open sharply lower on Monday, with futures contracts pointing to the S&P 500 down about 1.6 per cent at the open and the Nasdaq 100 falling around 1.3 per cent.

The sharp fall in bank shares reflects in part the long-running pressure on bond yields and the prospect of a lengthy period of near-zero interest rates. But pressure intensified after the International Consortium of Investigative Journalists and other media organisations including BuzzFeed alleged that global banks had flagged up suspicious transfers worth more than $2tn to US anti-money laundering authorities between 1999 and 2017.

Dickie Wong, head of research at Kingston Securities, said the ICIJ report had added to a host of issues that were undermining investor demand for HSBC’s shares, including its announcement in April that it would end dividend payments.

The bank’s Hong Kong-listed shares dipped below HK$30 on Monday, a level they did not even breach during the global financial crisis: “Even individual investors have already given up on the stock”, Mr Wong said.

However, despite fears of renewed lockdowns and the uncertainty posed by the US election, the wider sell-off should “prove fairly limited given the sheer abundance of central bank and government support at hand, which should ultimately place a sturdy floor under the markets”, said Candice Bangsund, vice-president and portfolio manager at Fiera Capital.

European policymakers are debating the future of pandemic stimulus programmes, with the European Central Bank having initiated a review of its bond-buying programme and the UK Treasury planning to announce an extension of its business support loan programme on Monday. The UK government is also under pressure to decide whether to extend the furlough scheme beyond October 31.

The downbeat start to the week’s trading came as a survey of fund managers found an increasingly number had been betting on a rapid global economic recovery. All but a small minority of 186 investors and strategists surveyed in September by Absolute Strategy Research expected corporate earnings to be higher in the next 12 months, equities to beat bonds and cyclical stocks, such as retailers and carmakers, to outperform defensive stocks. The survey was the most optimistic since December 2016.

“I’m surprised at how much optimism is embedded in the survey,” said David Bowers, ASR’s head of research “I don’t think we expected it to be quite so robust.”

Asian markets were also under pressure at the start of the week. China’s CSI 300 index closed down 1 per cent and Hong Kong’s Hang Seng fell 2.1 per cent.