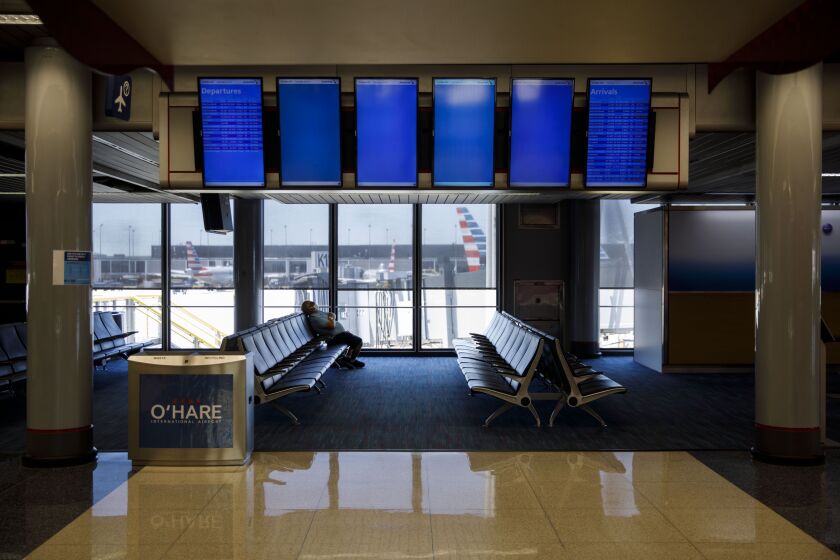 Chicago will conduct a full-court press with investors ahead of a $1.24 billion airport refunding structured to help O’Hare International Airport navigate the COVID-19 pandemic’s crippling impact on air travel.

The deal “is a refinancing for savings so we are not at this point looking at any sort of extension of maturities or any increased debt service in any year and the savings roundly speaking are about $200 million subject to market conditions,” Chicago Chief Financial Officer Jennie Huang Bennett said in an interview. The final maturity will remain 2040.

Most sector participants think it will take a long time for air traffic to recover to pre-pandemic levels. Near-term prospects are clouded by the pandemic’s uncertain course and traveler sentiments.

S&P warns of a “high degree of uncertainty exists regarding the trajectory of a recovery in aviation activity, complicating financial planning and increasing operational challenges.”

“The majority of the relief is going to be applied to 2021 and part of what we talked to the rating agencies about and will be talking to investors about is how we’ve built a multi-year financial plan” and “how are planning for that impact in 2021,” Bennett said.

O’Hare headed into the pandemic with total passenger levels hitting a peak of 42.2 million in 2019, adequate debt service coverage near 1.21 times and good liquidity.

COVID-19 delivered a gut punch, with passenger levels between January and July tumbling by about 60% compared to the same period last year with the sharpest blows of 95% and 91% seen in April and May, respectively.

The refunding had long been in the works but the savings would previously have been earmarked to reduce airline rents whereas now they will help manage the COVID-19 revenue hits.

O’Hare’s $294.4 million share of airport relief in the federal CARES Act package signed March 27 is helping the airport to manage through this year.

Those funds helped O’Hare adjust to the revenue loss and were applied to support airfield, terminal, car rental, and passenger facility credits to help support “the airport’s ecosystem,” Bennett said. The shift to a residual model airline agreement also provides more flexibility as it allowed the city to raise landing fees.

Bennett said the airport is using conservative projection models including strong liquidity in available reserves. “The liquidity gives us an ability to, in essence, reserve against potential unexpected changes in traffic going forward,” Bennett said.

“The finance plan we’ve put together for both 2020 and 2021 in essence has us covered without using reserves, without using debt restructuring and without any assumption of additional federal funding,” Bennett said. “So once we are able to complete this transaction, and generate the savings, we think that O’Hare will be in a pretty stable position to weather through the impact of COVID.”

The preliminary offering document is expected to be published late Tuesday and an investor roadshow will follow with an investor webinar tentatively set for later in the week, ahead of an expected Sept. 24 pricing. The city will also hold one-on-one investor interviews, stressing the rating affirmations, O’Hare’s importance to the air traffic grid, and near-and-long term fiscal plans.

Fitch Ratings affirmed the A rating on the airport’s $8.8 billion of outstanding senior-lien revenue bonds and $471 million of passenger facility charge-backed bonds. The outlook on both credit programs is negative, maintaining the negative outlook assigned in March along with a handful of other major airports.

“A continuation of low activity levels into 2021 without an established trend of recovery would likely result in a rating downgrade to all of the airport’s debt obligations,” Fitch warned.

“While the coronavirus represents a unique shock to the air travel sector, Fitch continues to view ORD as an airport with an important role in the national aviation system,” analysts wrote.

Ahead of the pandemic, airline costs per enplanement, or traveler, were moderate for a large-hub airport at $18.35 but are expected to rise measurably due to depressed traffic volumes and rising capital expenses. Capital projects over the next decade total $11.3 billion.

While the CARES funding is central to propping up the airport this year, the airport has also increased airline fees, and made payment accommodations to terminal concessionaires and rental car operators.

“While KBRA acknowledges management’s fiscal year 2020 budgetary revisions that are expected to achieve balanced operations without the need to draw on reserves, our belief is that fiscal year 2021 may present even more daunting financial challenges,” its analysts wrote.

The rating benefits from O’Hare’s unique dual-hub status for both United and American; it’s United’s largest hub and the third-largest for American.

It also is supported by strong origination and destination and connecting business, and the success in the prior capital program known as the O’Hare Modernization Program which reconfigured runways to reduce bad weather delays. Challenges abound from the pandemic’s impact, high leverage that will grow and strain debt metrics and large-scale capital program construction risks.

S&P Global Ratings affirmed O’Hare’s senior lien rating of A and negative outlook and removed it from CreditWatch; O’Hare and many other airports had been placed there Aug. 7 due to the pandemic’s blow to air travel.

The big institutional buyers conduct their own credit analysis, but the rating affirmations still play into investor decisions in a time when other airport credits — including Chicago’s Midway — have been stung with downgrades.

“O’Hare is a standout and I think that is a good signal to the market and investors,” said Ken Cushine, a principal with Frasca.

While the dominance of United and American introduces some risks to the overall credit profile depending on their fortunes, it’s an attribute for O’Hare during the pandemic as is the airport’s central location and long-held prominence in the nation’s air traffic system. “The names of the tail of the planes may change but there will always be planes at O’Hare,” Cushine said.

The finance team anticipates the deal may see some widening of spreads from previous sales, but Cushine said absolute yields are lower and so the savings are substantial. Spreads have also tightened over late summer in recent airport deals and secondary trading, Cushine said.

The $2 billion new money and refunding 2018 sale provided some initial funding for design and planning for the $8.5 billion O’Hare 21 Terminal Area Plan. Spreads were under 50 bps heading into the 2018 sale.

Bennett said the design phase remains on course with construction still several years away and the timeline for the project not yet been formally set. No new money is planned until next year, Bennett said.

The new residual agreement that runs through 2033 gives the city more planning flexibility with a “negative majority-in-interest” veto on projects, that requires agreement from 70% of long-term signatory airlines measured either through landed weight for airfield-related projects or terminal fees and charges for terminal related projects to block a project. It also enhanced coverage levels and maintenance reserve levels.