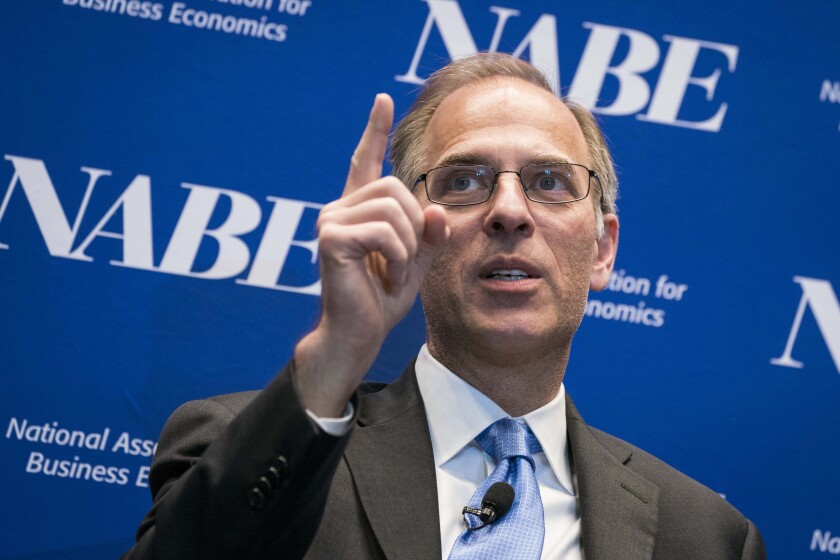 The chief economist for Moody’s Analytics is predicting the U.S. economy will dip back into a recession if Congress and the Trump administration don’t agree on additional federal aid for state and local governments.

“If federal lawmakers, don’t get it together and provide no additional support to the economy, in my view, the economy is going back into recession,” Mark Zandi said Thursday during the rollout of the National League of Cities 2020 report on City Fiscal Conditions.

Under that scenario, state and local governments would lay off an additional 1.5 million to 2 million workers such as teachers, police, and firefighters over the next 12 to 18 months, Zandi said. That’s in addition to the 1.3 million already laid off.

The recession caused by the COVID-19 pandemic lasted only two months compared to the 18-month duration of the Great Recession between December 2007 and June 2009.

But the severity of this year’s recession is around three times as large, Zandi said, because he estimates gross domestic product shrank 14% compared to the 4% drop during the Great Recession.

“If the Great Recession provides a lesson, it is that it takes years for cities to recover lost revenue,” said Michael Pagano, director of the Government Finance Research Center at the University of Illinois at Chicago.

Pagano, who coauthored the NLC report with NLC Research Director Christiana McFarland, said that it took 12 years on average for a city’s general funds in constant dollars to return to the pre-recession levels.

Additional federal aid to state and local governments is a key sticking point in the stalled negotiations between the Trump administration, which has offered $150 billion to $200 billion, and congressional Democrats who support the $915 billion contained in the House-passed HEROES Act.

The administration wants to keep the entire package of aid — including renewal of supplemental unemployment benefits and other benefits — to a top line of $1 trillion while Democrats have offered to reduce their $3.4 trillion plan to $2 trillion.

Moody’s Analytics estimates that state governments face a revenue loss of through fiscal 2022 of $312.3 billion and the number totals around $500 billion if local governments are included.

The NLC is among the state and local government groups that have asked Congress for an additional $500 billion in aid over two years.

“We know that a national recovery is not possible without cities, towns, and villages also being economically strong,” said NLC CEO and Executive Director Clarence Anthony.

The new NLC report found 87% of municipal finance officers expect their cities will be less able in fiscal 2021 to meet the fiscal needs of their communities compared to only 24% in the same survey a year ago.

“This widespread sentiment about lack of fiscal capacity has not been reported since the low point of the Great Recession,” the report said.

Cities also experienced a sudden drop in revenue beginning in March that they had no warning of.

“We’ve never seen the cliff quite like this before,” said Pagano.

Municipal governments were able to budget for the declines at the onset of the Great Recession, the dot com bust, and the recession of 1990-91, Pagano said.

As a result, many local governments have already dipped into their budget stabilization funds also known as rainy day funds.

“The Government Finance Officers Association only suggests that there be enough reserves for about two to three months of operating expenses,” Pagano said. “But we’re already into month five.” Nor can cities zero out their reserves because they are uncertain whether the federal government will come through with additional funding.

Zandi predicted members of Congress and the Trump administration will ultimately reach an agreement because not doing that is “just unfathomable to me, given the economic implication of not providing that support.”

“I’m confident that aid will come to state governments because it’s the right thing to do,” Zandi said.