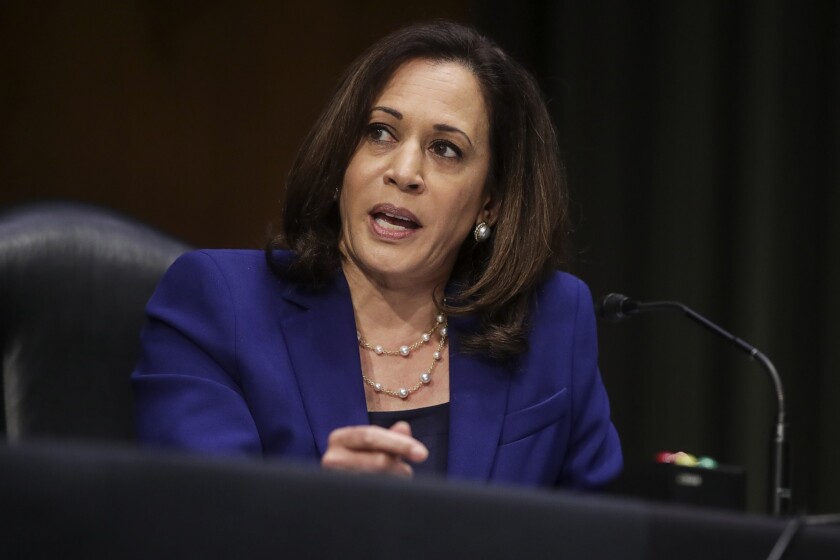 Sen. Kamala Harris of California brings a long record as a prosecutor with no significant experience in municipal finance as the running mate of presumptive Democratic presidential nominee Joe Biden.

The 77-year-old Biden, who announced his selection of the 55-year-old Harris Tuesday, already is running on a muni-friendly platform that makes her policy record in public finance of little note if they win the November election.

Harris worked as a prosecuting attorney after graduation from law school advancing in that field until she was elected California attorney general in 2010, re-elected in 2014 and successfully was elected to the U.S. Senate in November 2016.

Biden distinguished himself during his long career in the U.S. Senate from 1973 to 2009 as a member of the Senate Foreign Relations Committee and the Senate Judiciary Committee, each of which he chaired during separate stints near the end of his tenures.

But Biden’s campaign website says he will aim to provide all Americans in municipalities of more than 100,000 people with quality public transportation by 2030.

Biden commuted to Washington from his home state of Delaware on Amtrak during his long career in the U.S. Senate and is an enthusiastic booster of passenger trains.

Multifamily private activity bonds would receive a boost under a Biden administration if he is able to persuade Congress to enact the bipartisan legislation that would enhance the Low Income Housing Tax Credit.

His campaign website specifically mentions his support of the expansion of the tax credit, which is often paired with PABs in financing packages.

Biden said at an infrastructure forum for presidential candidates in February that it’s “a false choice” to say the next president will have to choose between fixing the nation’s aging infrastructure and moving toward a more climate friendly economy.

The infrastructure legislation proposed by House Democrats contains numerous muni-friendly provisions which presumably would be signed into law if Democrats regain control of the Senate and elect Biden as president.

Biden made his most notable mark with the public finance sector early in the Obama administration for his key role in implementing the February 2009 American Recovery and Reinvestment Act’s infrastructure investments, which included the enactment of direct-pay Build America Bonds.

Dee Wisor, an attorney at Butler Snow in Denver, said Biden might delegate a similar role to Harris next year if they are elected and Congress enacts infrastructure legislation as an economic stimulus.

Squire Patton Boggs partner Bob Labes said the election of Harris as vice president could have an impact in the long run based on Biden’s own experience in that position.

“It seems likely that a President Biden would view Vice President Harris as more of a partner than a subordinate,” Labes said.

“Her involvement in shaping the Biden administration policies could result in an increased reliance on public finance options to help fund those policies,” Labes said.

In the nearer term, Biden’s cabinet selections for the Treasury and Transportation departments, as well as the next chairman of the U.S. Securities and Exchange Commission, will have a much greater bearing on the municipal finance sector.

Wisor said the cabinet selections for the departments of Education, Energy, and the Interior also are likely to have an impact on those parts of the public finance sector.

“Tax-exempt bond issues are third-tier even in an activist Democratic administration bent on an infrastructure push,” said Chuck Samuels of Mintz Levin in Washington, counsel to the National Association of Health & Educational Facilities Finance Authorities.

“There are tons of Democrats from a municipal finance point of view who would be excellent at Treasury, including those who have experience in state and local government as well as investment banking,” Samuels said. “I would caution, however, that you can’t automatically assume that in these high-level positions, public finance experience translates into supportive actions.”

President Bill Clinton’s activity in the municipal bond market as governor of Arkansas didn’t translate benefits for the muni sector during his two terms even though he nominated Robert Rubin, who had headed up public finance at Goldman Sachs, as Treasury secretary, said Samuels.

“Given the economic and political circumstances they faced and the press of other business, they did little or nothing to be supportive of positive federal legislation for municipal bonds,” he said.