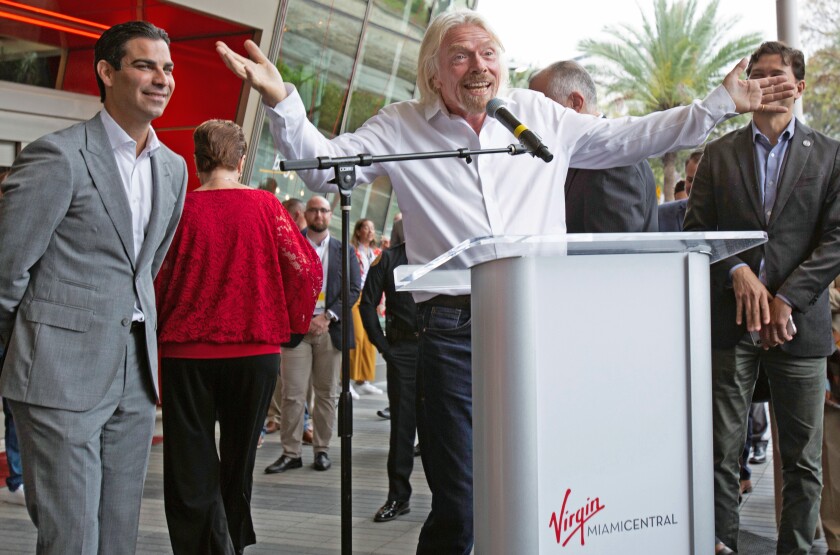 Virgin Trains USA borrowed billions from investors last year, and now the name is disappearing before it ever appears on Florida’s privately owned high-speed passenger trains.

The name will now revert to Brightline, the company said in a Revenue and Ridership Report posted on the Municipal Securities Rulemaking Board’s EMMA filing system Aug. 7.

“We will no longer use the Virgin brand following our parent’s termination of its licensing agreement with Virgin Enterprises Limited,” the report said. “We will change our name to Brightline Trains LLC following the expiration of the applicable notice period for name changes under the senior loan agreement.”

Virgin has no remaining affiliation with the company, its parent company, or its affiliate, whether through equity ownership or otherwise, the report said.

No reason was given for the license termination, and the company wouldn’t comment further. However, the Aug. 7 report said, “Virgin has disputed the validity of the termination notice.”

Last year, the Florida Development Finance Corp. served as the conduit issuer on two separate deals for the company, sold in two series as $1.75 billion and $950 million with Virgin as the borrower.

Bill Spivey, FDFC’s executive director, said the name change won’t have a material effect on the creditworthiness or collateral of the bonds. He also noted that investors bought bonds in the name of Brightline in 2017 and under Virgin’s name in 2019.

“Going forward, we expect the borrower to use the Brightline name with no material impact on the credit, investors or marketability,” Spivey told The Bond Buyer.

In November 2018, the passenger train company previously known as Brightline, and before that All Aboard Florida, inked a branding license agreement with Virgin Group, headed by British billionaire Richard Branson.

Under the license agreement, the rebranding to the Virgin name was to be completed by December 2019, the OS said. It also said the agreement could be terminated if Virgin Trains USA “fails to rebrand itself to the Virgin brand before December 31, 2019.”

The license agreement was supposed to have an initial term of 20 years, with options to renew up to two additional 10-year periods as long as Virgin Trains USA didn’t commit an “uncured material breach” that would allow the company to terminate or non-renew the license. The OS said a breach may include improper use of the brand, insolvency, and a challenge of licensed trademarks.

The license can also be terminated if a route doesn’t launch by a specified deadline or if Virgin Trains fails to meet certain gross sales targets.

The Virgin Group itself is under strain from the coronavirus pandemic. Its Virgin Atlantic airline is in the midst of a financial restructuring and the debut of its first Virgin Voyages cruise ship is on hold because of COVID-19.

Mary Talbutt, lead fixed income portfolio manager for Stanley-Laman Group Ltd., said the unwinding of the licensing agreement may be due to the adverse effect COVID-19 is having on passenger rail ridership.

“It is possible that Virgin Trains USA’s profitability could be in question with ridership down significantly and the diminished ability to expand the Virgin branding,” Talbutt said after reading about the licensing agreement in the 2019 OS.

Virgin Trains USA “would not be the only company currently experiencing these and similar difficulties,” she said. “Many businesses are folding up or reorganizing right now in an effort to survive.”

Talbutt also said unwinding of the license agreement may be due to the need to preserve cash or a decision to disassociate Brightline from Virgin Atlantic Airways, which filed for Chapter 15 bankruptcy in New York on Aug. 4, a process to protect its U.S. assets during its U.K restructuring.

The airline outlined its problems in a July news release, which said that the severe impact of the COVID-19 pandemic led to an agreement on a restructuring plan and five-year business plan aimed at keeping the airline flying. The plan involves the support of shareholders, including Delta Air Lines, new investors and existing creditors.

Brightline is also constructing a high-speed passenger train running about 185 miles between Las Vegas and the city of Victorville, California. That project has also been known as Virgin Trains USA, but it is now called XpressWest, a Brightline Company, according to a posting on the company’s website.

Brightline started passenger rail service in Florida between Fort Lauderdale and West Palm Beach in January of 2018 and added service to Miami in May. Construction is underway to extend service from West Palm Beach to Orlando by 2022.

The company cited the COVID-19 pandemic as the reason for halting all passenger service on March 25 and laying off most of its staff. With south Florida being among the state’s hot spots for positive cases, passenger rail service hasn’t yet resumed.

The short-haul version of the Brightline service was losing money.

“The suspension of service is not expected to have a material net financial impact on our business and we have access to ample operating liquidity to withstand a protracted slowdown in the travel market,” the Aug. 7 revenue and ridership report said. “We continue to monitor the situation and evaluate an appropriate time to re‐open service.”

In addition to the severe impacts from COVID-19, the passenger rail company and the U.S. Department of Transportation continue to face legal challenges brought by Indian River County on the east coast of Florida, where county commissioners and many residents believe the train, which won’t stop there, poses a safety hazard running through their downtowns.

In May, Indian River County filed a petition for a writ of certiorari asking the U.S. Supreme Court to overturn an appeals court ruling against the county’s lawsuit challenging the USDOT’s approval of private activity bonds for the train project.

On June 17, the Americans for Prosperity Foundation filed an amicus curiae or friend-of-the court brief in support of Indian River County. The foundation said it had “a particular interest in this case” because it exemplifies a recurring problem with lower federal courts deferring to federal agencies without analyzing the statutory text.

In December 2019, the U.S. Court of Appeals for the District of Columbia ruled that the USDOT “permissibly and reasonably determined” that the passenger train project qualified to use tax-exempt private activity bond financing and that the project’s environmental impact statement complied with the National Environmental Policy Act.

In its petition to the Supreme Court, Indian River County’s attorneys are also challenging the issue of judges deferring to the judgment of the USDOT in interpreting environmental laws.

In an amicus brief filed June 19, the nonprofit Indian River Neighborhood Association also questioned whether lower federal court judges improperly deferred the interpretation of federal law to the USDOT, an interpretation that allowed the transportation agency to approve tax-exempt PABs for the rail project.

“If the court properly applies long-standing rules of statutory construction, it will determine that Brightline did not qualify for tax-exempt PABs,” the neighborhood association said.

USDOT and Brightline must file responses to the county’s petition for a writ of certiorari by Aug. 21.