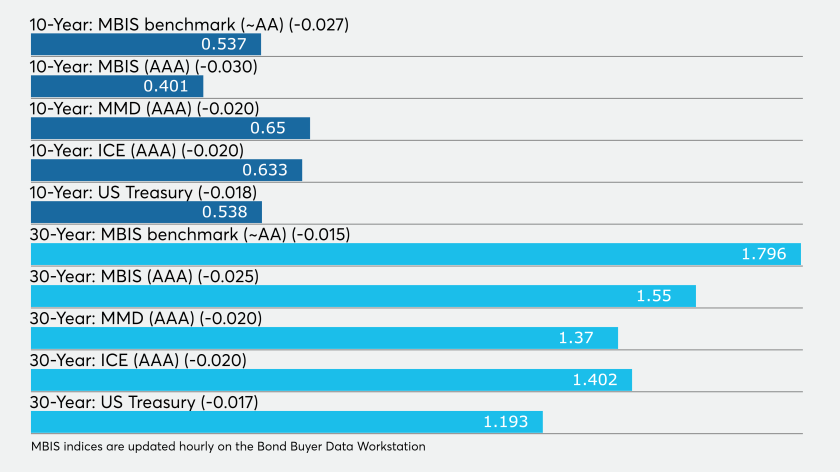 Municipal bond buyers will see a varied slate of new deals heading their way, with taxable deals leading the slate. The largest issue on the calendar is a $900 million taxable general obligation bond deal from the state of Hawaii.

Municipals continued to strengthen, with yields steady to down as much as two basis points on the AAA curves on Friday.

IHS Ipreo estimates volume for the week of Aug. 3 at $7.3 billion in a calendar composed of $6.3 billion of negotiated deals and $931 million of competitive sales.

Proceeds will be used for various public improvement projects, such as public buildings, elementary and secondary schools, higher education facilities and public libraries and parks.

“Hawaii is bringing one of the largest taxable transactions it has done at $900 million,” said John Hallacy, founder of John Hallacy Consulting LLC. “A number of the names we have not seen recently including LIPA, the Hospital for Special Surgery, and Rutgers.

“This could be the week of the Texas Two Step: Taxables and Texas Credits,” Hallacy said. “This is always a popular time of year for issuance given the new fiscal year in Texas starts Sept. 1.”

Other taxable deals on the slate include the Hospital for Special Surgery’s (A1/A+//) $350 million deal, to be priced by Goldman on Tuesday; Rutgers State University, N.J.’s (Aa3/A+//) 220.69 million of GO refunding bonds to be priced by Barclays Capital on Monday; and

Hallacy noted that a couple of appropriation bonds are featured on the calendar, including Ohio and Municipal Improvement Corporation of L.A. (MICLA).

“Spreads should be tight to the GO in this market,” he said.

Muni strength prevails in hindsight of volatility
The municipal market headed into month end with a strong finish, according to Jeffrey Lipton, managing director and head of municipal credit and market strategy at Oppenheimer & Co. Inc.

“July was a decidedly strong month for municipals — outperforming U.S. Treasuries, with long benchmark yields down over 20 basis points for the month,” he said Thursday.

Municipals traded in a narrow range for most of the final week of July, he noted. This reflected a pause given the Federal Open Market Committee meeting, a focus on the latest iteration of a fiscal relief plan, and concern over faltering reopening and recovery efforts in various states, according to Lipton.

“As we have maintained, compelling market technicals coupled with swift and direct policy intervention from both Congress and the Fed have created a strong tone that seems to have made the March onslaught a distant memory,” he added.

The muni bond asset class has come a long way since those darker days, when a sell-off of historic proportion took hold as mutual fund complexes struggled to meet swelling redemption needs.

“Market participants seem to be betting on the resiliency of muni credit as revenue displacement continues across virtually all sectors of the asset class,” Lipton said.

State and local governments remain on the front lines, he said, given their charge to deploy adequate safety measures and provide certain essential services.

“Credit headlines are expected to continue with greater visibility as a wider range of sectors and issuers reveal operational pressure related to the economic suspension and the residual effects of a possible second wave,” Lipton said.

At the same time, new issue activity is more predictable and market technicals are once again “a reliable barometer of price movement and asset performance,” according to Lipton.

“The muni market had been looking for a well-orchestrated deployment of liquidity and credit support as a way to respond to degrees of market stress and to contain a broader contagion impact,” he said.

The market received it in the form of a series of preemptive monetary and fiscal policy actions, according to Lipton.

“While there remains a list of medical and scientific unknowns surrounding this evolving public health crisis, we find ourselves better positioned today to make strategic market and credit assessments,” Lipton said.

Consumer and market sentiment have improved with a meaningful reversal of the COVID-19 growth curve, yet state and local governments are taking direct actions to contain spiking transition rates, even at the expense of sacrificing recovery progress, Lipton said.

“The municipal bond market entered the crisis from a position of strength, and while there are vulnerabilities as the financial markets navigate these uncertain waters, we believe that the asset class will demonstrate resiliency, with a manageable impact on credit,” he said.

Market disruption and volatility have been tempered, and the narrative surrounding the abrupt recession has now transformed into encouraging evidence that state and local governments as well as many revenue enterprises are better positioned than perhaps initially thought to mitigate the effects of COVID-19,” he added.

Lipper reports $1.8B inflow
Investors remained bullish on municipal bonds and continued to put cash into bond funds in the latest reporting week.

In the week ended July 29, weekly reporting tax-exempt mutual funds saw $1.792 billion of inflows, after inflows of $2.100 billion in the previous week, according to data released by Refinitiv Lipper Thursday. 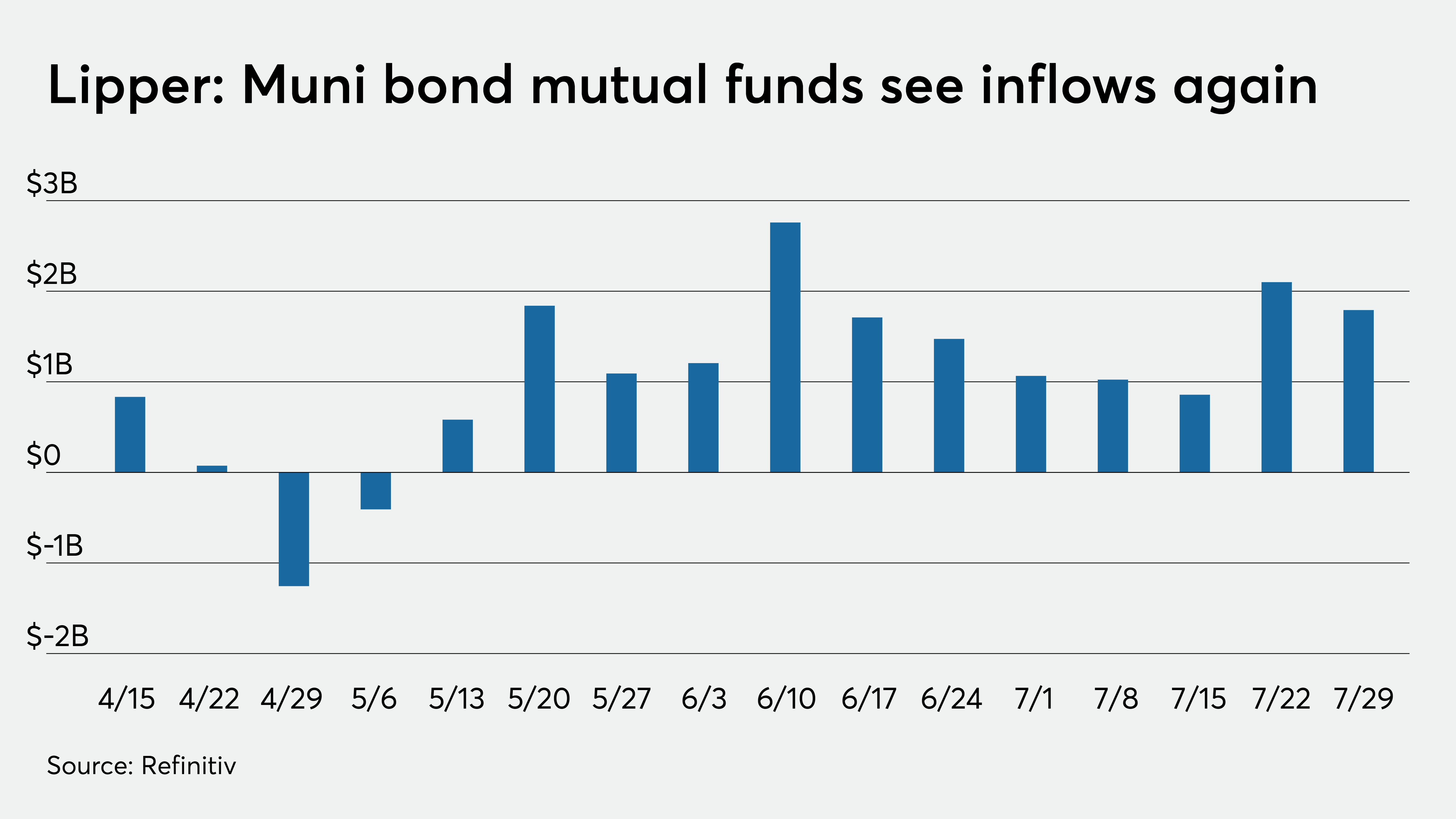 It was the 11th week in a row that investors put cash into the bond funds.

The four-week moving average remained positive at $1.443 billion, after being in the green at $1.262 billion in the previous week.

Secondary market
Municipals were stronger om the long end of the curve Friday, according to final readings on Refinitiv MMD’s AAA benchmark scale.

Munis were little changed on the MBIS benchmark and AAA scales.

Treasuries were stronger as stock prices were mixed.

Bond Buyer indexes move lower
The weekly average yield to maturity of the Bond Buyer Municipal Bond Index, which is based on 40 long-term bond prices, fell one basis point to 3.54% from 3.55% the week before.