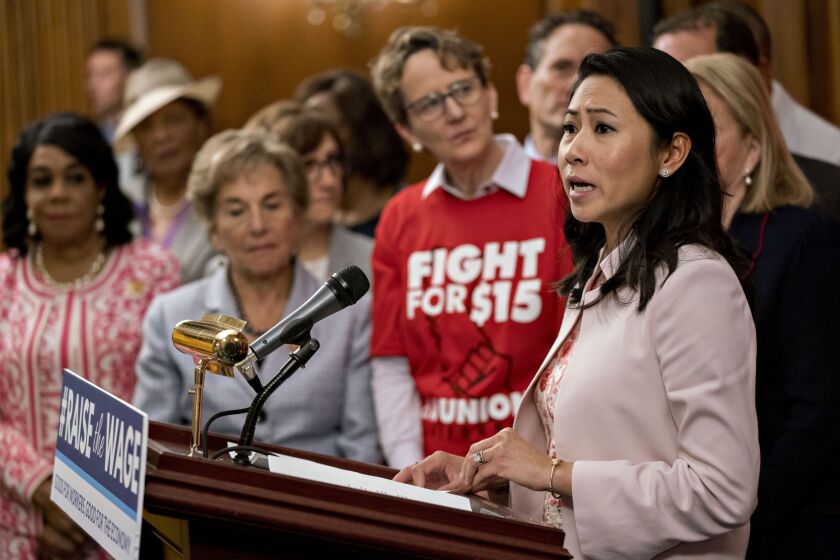 A bipartisan bill included in House Democrats’ larger infrastructure package would expand the use of tax-exempt private activity bonds to finance small to mid-sized manufacturing and agricultural sectors.

The bill, introduced in December by Reps. Stephanie Murphy, D- Fla., and Darin LaHood, R-Ill., is included in a $1.5 trillion dollar infrastructure bill set for a House vote sometime this week.

The Modernizing Agricultural and Manufacturing Bonds Act would change certain definitions to try to expand the use of small issue manufacturing bonds, known as industrial development bonds, and first-time farmer bonds, often referred to as aggie bonds.

The inclusion of MAMBA and other bond provisions in the infrastructure bill is critical, said Katie Kramer, vice president at the Council of Development Finance Agencies.

“To open up all of the necessary technical corrections that are in there now, like advanced refundings, fixes to tax credit bonds is critically important from a variety of different perspectives in our industry,” Kramer said. “We have a stronger viable path forward now than we’ve ever had before.”

The House Democrats’ infrastructure package, the Moving Forward Act would also include a new series of taxable direct-pay bonds and tax-exempt advance refunding.

MAMBA would expand the definition of a manufacturing facility to include more intangible property such as bio-technology, and software among others.

It would also allow the use of IDBs to be used beyond just facilities located on the same site as the manufacturing facility to include facilities such as offices, locker rooms and cafeterias. Currently, not more than 25% of net proceeds of a bond issuance can be used to provide those facilities. Under MAMBA there would be no financing restrictions.

“A good amount of manufacturing now occurs on the computer and in an office,” Kramer said. “You have lots of programmers, lots of coders, lots of IT infrastructure that is needed in order to run and maintain a lot of the manufacturing equipment.”

Intangible assets such as software are a growing component of the economy, Kramer added, but are being left out of being able to access tax-exempt financing.

If passed, the bill would also increase the maximum IDB size limitation to $30 million from $10 million. Kramer said $10 million doesn’t go far for today’s manufacturers, especially for the price of equipment and buildings.

“The $10 million limit on bond issuance is forcing many issuers to forgo the financing of worthwhile projects, hurting local economies,” CDFA wrote. “Additionally, in today’s terms the $10M bond size limit that was established in 1979 has less than a third of the financing power that it had when the limit was set in 1979.”

The proposed bill would also increase the amount of bond proceeds to be used by first-time farmers to acquire land for farming purposes from $450,000 to $552,500 to keep up with inflation.

Currently, first-time farmers can use $62,500 of small issue bond proceeds for depreciable property, which CDFA called over-restrictive. MAMBA would eliminate that dollar limitation and first-time farmers could use the entire $552,500 issuance for farming equipment, breeding livestock and other capital assets.

“To become a first-time farmer, your exposure to having to borrow money is pretty intense, sometimes you’re millions of dollars in debt before you’ve gone through one growing cycle,” Kramer said. “That’s not very sustainable for first-time farmers, so giving them the ability to use aggie bonds to buy useful equipment that happens to be used is still an important investment in the agricultural base of our economy.”

Home Buyers Are Willing To Go 25K Over Budget For The Right Home. Here Are The Factors That Matter The Most
Best Options Trading Platforms for July 2020
House infrastructure bill set to pass, partisan challenge ahead in Senate
Appellate win for Miami-Dade expressway is far from a legal resolution
Far West focus: Muni market attention turns to big Calif., Ore. deals in $7.4B slate