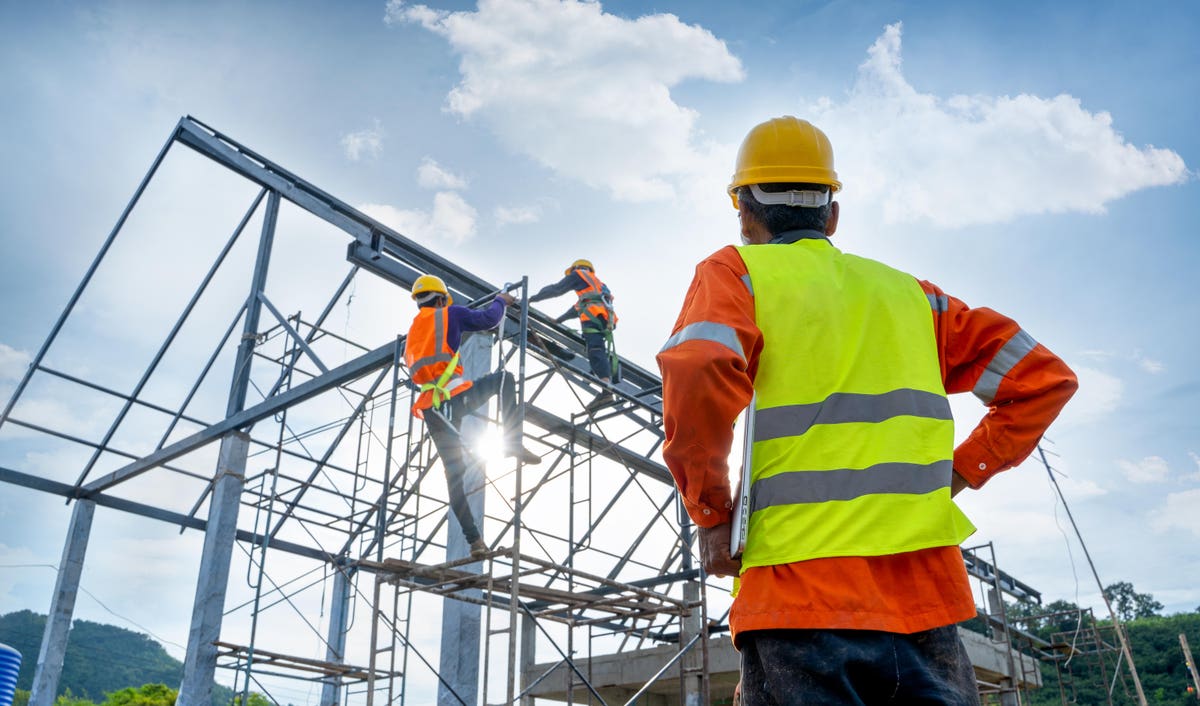 If there are two symbiotic truths in British real estate, they are such that the economics of house prices are predicated on the balance of the supply and demand, and that during every electoral cycle parties of all stripes making their pitch championing that their reign will herald an ambitious housebuilding initiative that will put a nail in the housing crisis for good.

But between the public need for housing and the government pledges to build there sits the hammer that builds the home: the U.K.’s sprawling residential construction industry.

The ongoing housing crisis and the demand for more affordable housing has hoisted pressure on housebuilders to provide viable options for buyers that fit within their borrowing power – an issue no less burdened with the withdrawal of near 90% of the 90-95% loan-to-value (LTV) mortgage range. But preceding this comes an abject lack of political will to either influence or support further growth, or indeed change, in the construction industry.

Each successive government’s construction plans have generally failed to hit their targets. And in this cycle’s season of ‘Will They, Won’t They?’, the incumbent Conservative government has pledge to build one million new homes at a rate of 200,000 per year until the mid-2020s.

Understandably, COVID has thrown a wrench in the wheel just as the new government was finding its feet at the start of its term, and Prime Minister Boris Johnson announced in response today that this is the moment to be ambitious, promising a £5-billion new deal to build homes and infrastructure.

But you cannot always just throw money at the wall and hope it sticks. Such promises and cash injections have been pledged before, and questions arise as to why construction under the Conservatives, perhaps the strongest political advocate of private home ownership, presided over the worst decade of housebuilding since the Second World War– completing around 130,000 homes a year between 2010 and 2019, down from 147,000 in the 2000s and 150,000 in the 90s. Indeed, during their previous term, of the 200,000 starter homes promised; none were delivered.

There is something amiss in the trough that feeds builders and builds-up house prices, and it’s rather troubling that the monetary value of a home is worth more than the value of having a home.

The cost of living

Britain is home to some of the finest properties in the world, but also some of the highest worldly averages in properties prices and land value, with London ranking at number 11 worldwide on the latest CBRE Global Living 2020 report for average properties prices, at approximately $624,225 per unit, albeit down from the eighth position in 2019.

That is not to say that the country and the value of housing is so completely captured by the capital, as it is only one of three U.K. cities on the CBRE’s latest report, including Birmingham (30) and Manchester (32).

Adding in the cost-of-living factor on a country level adds a different layer to the issue of affordability, however. Data from personal finance site GOBankingRates puts the United Kingdom at 21st worldwide, based on the daily cost of living and average purchasing power of each country, with the average cost of living in 2017 at £25,766 per year, and with London unsurprisingly costing slightly higher at £30,898. Considering that the average household income in 2019 was £29,600, the range for affordability is increasingly stretched as demand for housing pushes up prices beyond what many people can afford.

We need ambition, not ambivalence

The onus therefore on the government and construction industry to collaborate on ambitious, large-scale affordable housebuilding is greatly emphasised on this costing. So why then are housebuilders so reluctant to build? And I am not referring here to the slowdown caused by COVID, but rather the circumstances prior that have exacerbated the housing crisis.

One of the more interesting figures in this regard is the increasing number of insolvencies hitting the housebuilding industry of the past several years. According to the Financial Times, last year 368 firms in the sector filed for insolvency, up from 207 in 2016, with the figure rising each year in the intervening years. Among these figures of collapsed builders, most were small and medium-sized companies.

More worrying however is a statistic referenced in the FT from the National House-Building Council (NHBC) – a provider of warranty and insurance for new homes – that suggests that the number of small housebuilders registered with the NHBC has dropped from approximately 12,000 in 1988 to only around 2,000 today. Mark Vlessing, CEO of the London developer Pocket Living, puts it down to planning becoming ‘more complex and political, and takes longer’. The outcome of so many smaller housebuilders being forced out of business is the centralisation of development and land under the umbrella of the largest corporations. The housebuilder Persimmon tripled their pre-tax profits between 2013 and 2019, with other large builders such as Taylor Wimpey and Barratt Homes, also reporting strong growth.

Since launching in 2013, the government’s Help-to-Buy housing scheme has perhaps disproportionately benefited the larger builders, with an argument to be made that it uses government funding to subsidize the income of builders, which are subsequently able to command higher house prices as the scheme supplements buyer potential. Property expert Henry Pryor calls it the ‘crack cocaine of the building industry’. It is nevertheless also rather difficult to see the cost between the benefits to both buyers and builders – 263,997 homes were bought on a Help-to-Buy equity loan between April 1 2013 and December 31 2019, so in that regard it could hardly be thought of as a failure to consumers.

However, the banks’ withdrawal of most of the 90-95% LTV mortgage range will only serve to push up house prices further at time when financial inequalities and housing affordability are very much in focus. On the subject of affordability, the NHBC puts the number of new homes registered in the affordable and rental sector in 2019 at 48,936, considerably less than the 112,086 registered in the private sector over the same period. And although affordable housing in 2019 did increase – up 13% on 2018 figures, private sector builds were down 3%, with the total number of registered properties for the year at 161,022, up only 1% on 2018, according to the NHBC’s data, which covers approximately 80% of the U.K.’s new build market.

These figures are not rising quickly enough to meet the demands of a growing buyer base, forcing many people to rent for longer, or be forced to rely on the Bank of Mum and Dad to get on the ladder.

Change starts at the foundations

In light of the government’s mammoth coronavirus spending, perhaps COVID will be a watershed opportunity to invest more heavily in housebuilding to meet the demands of the nation. Research from the Local Government Association finds that delivering 100,000 high quality social homes per year could return £320 billion to the nation’s coffers over 50 years. This would reduce demand on private-sector homes and take people out of the rental market – hopefully in response would be a decline in prices for both private ownership and rental.

Of course, actions speak louder than words, and it will be down to the government to push the builders into developing new homes as we move past the pandemic. But beyond this the government should look at overhauling the entire planning system. I have suggested previously opening up the greenbelt for development, which would make available more land to be built on and lower the value on the limited plots currently earmarked for new homes. But there are other options that would perhaps go further to incentivize and reinvigorate the construction industry.

A report published this month from the Centre for Cities researcher Anthony Breach makes the case for flexible zoning to fix the housing crisis – arguing that inequalities are growing because insufficient housing is being developed in areas of high demand to subsidize prices. One of the main outcomes of the report is not to open the greenbelt but to replace it with a zoned area, conditioned on population growth, and to cease the ration of new land for development, whilst still protecting countryside and protected reserves.

Further changes cited would be to make the process of applying for planning permission easier for developers, and to set further restrictions that would stem the practise of land-banking whereby builders hoard land to spread planning risk over time. Undeveloped land in or near popular areas tends to increase over time, incentivizing developers to sit on the land and wait for its value to increase before building, only adding fuel to the housing crisis fire as demand continues to surge.

The report argues that deregulation is not the answer, but rather that the solution is to correct the mechanism for regulation itself. A flexible zoning system would make more land available and encourage builders to complete developing land rather than land-banking or progressing at a slow pace of construction. Japan is a good example of an effective and flexible zoning system at work, providing affordable homes without a housing shortage as reflected in the U.K. And whilst 200,000 housing starts per annum is a decade high for us here, Japan registered 950,000 starts per year – despite a shrinking population.

Would such a system work here? Hard to tell. But after a decades-long housing crisis the current levers in place are clearly not working sufficiently anymore. Overhauling the planning system and incentivizing builders to develop not just at a quicker pace, but delivering higher quality homes, could rapidly increase the volume of genuinely affordable options throughout the country, and consistently meet government pledges to provide millions of new homes every decade.

As I rather enjoyed hearing from this TED Talk – ‘If it’s broke, go fix it’.