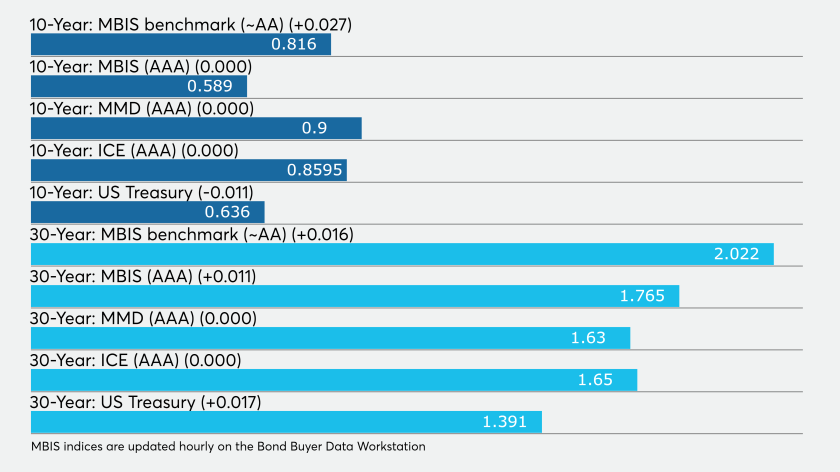 This week’s slate of over $7.2 billion is hefty for a holiday-shortened week and as the market drives slowly into quarter end, tax-exempts will ride in the back seat for a change.

It will be taxables at the wheel this week, according to Kim Olsan, senior vice president at FHN Financial.

“In a rare circumstance, taxable issuance this week is greater than expected tax-exempt volume and includes a $1 billion Massachusetts School Building sales tax issue. June’s taxable muni share of syndicate deals will exceed 35% and for the year moves up to 25%,” she wrote in a Monday market comment.

“Considering the credit/spread proposition in taxable munis against lower UST rates, the sector can only be expected to draw ongoing interest into Q3,” Olsan said.

The deal was priced at par to yield 2.585% in 2050, about 120 basis points above the comparable Treasury security.

The deals are made up of $350 million of tax-exempts and $1.095 billion of taxables. BofA Securities, Citigroup and UBS are lead managers on the dedicated sales tax refunding bonds.

In the short-term sector, JPMorgan Securities is set to price Los Angeles County, Calif.’s $1.2 billion of tax and revenue anticipation notes on Tuesday.

Citigroup is set to price the Port Authority of New York and New Jersey’s $1.1 billion of taxable notes on Tuesday.

BofA is expected to price the Philadelphia School District, Pa.’s up $550 million of tax and revenue anticipation notes on Tuesday.

“The muni bond market is starting off the holiday-shortened week on a quiet note,” ICE Data Services said in a Monday market comment.

ICE said yields on its curve were lower in the front end and basically unchanged in the back end.

Munis were little changed on the MBIS benchmark and AAA scales.

“Bids wanteds posted to Bloomberg’s bid system on Friday were the lowest figure since Jan. 4 at just $303 million — signaling that syndicate purchases are being paid for with cash balances and that month/quarter-end activities are not that active,” Olsan said.

She added a tightly traded yield range in recent days against the flight-to-quality Treasury trade has moved relative value ratios higher but with limited benefit given where absolute muni yields sit.