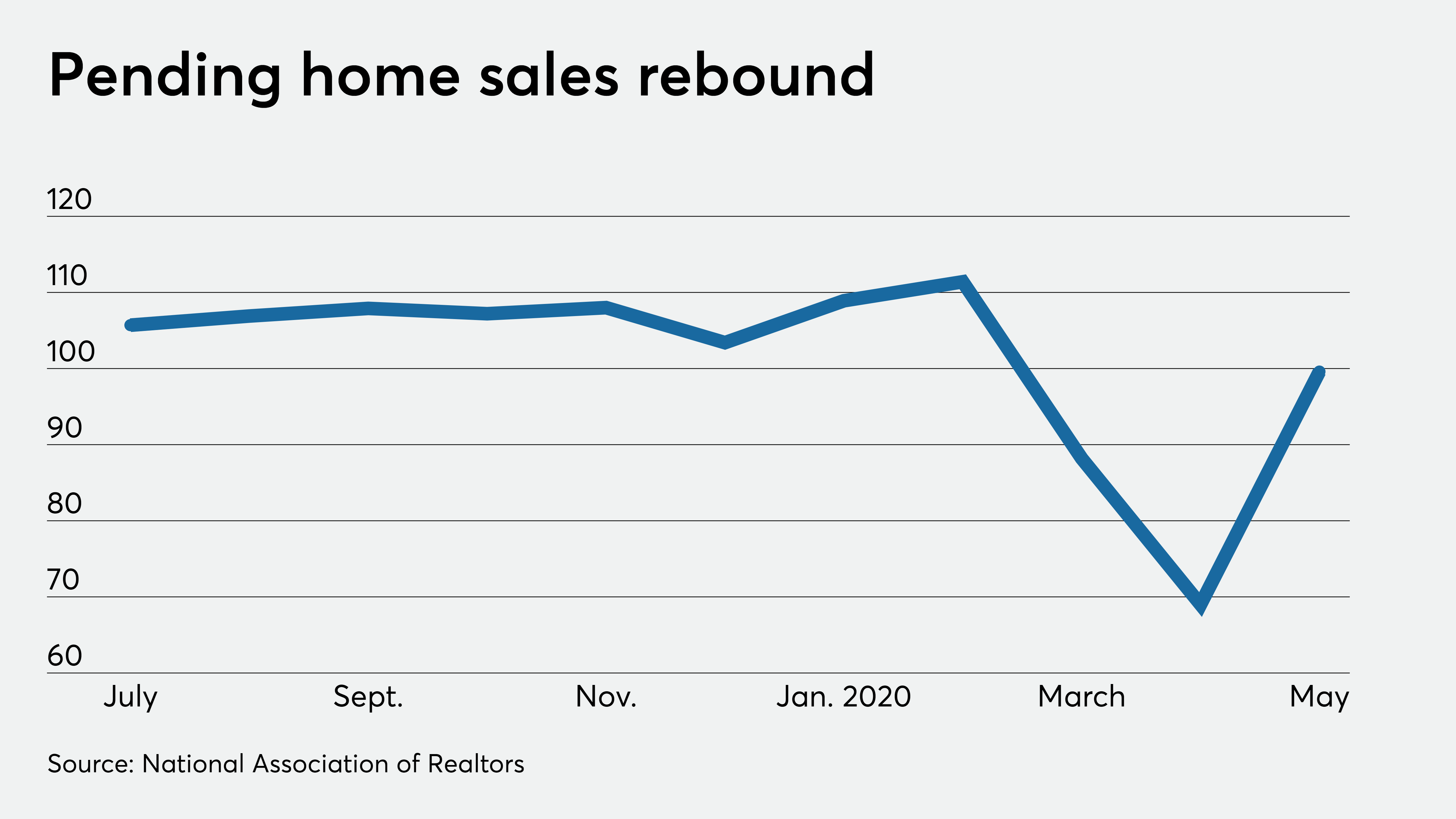 Pending home sales surged 44.3% in May, to an index reading of 99.6, the National Association of Realtors announced on Monday, but despite the record climb, pending sales trailed last year’s pace by 5.1%.
The spike follows two months of declines (a 21.8% slump in April and a 20.8 slide in March) driven by the coronavirus pandemic. The month-over-month increase is the highest such gain since NAR started this index in January 2001.

“This has been a spectacular recovery for contract signings, and goes to show the resiliency of American consumers and their evergreen desire for homeownership,” said Lawrence Yun, NAR chief economist. “This bounce back also speaks to how the housing sector could lead the way for a broader economic recovery.”

Economists polled by IFR Markets anticipated an increase of 19.7%.

“More listings are continuously appearing as the economy reopens, helping with inventory choices,” Yun said. “Still, more home construction is needed to counter the persistent underproduction of homes over the past decade.”

Existing-home sales should hit 4.93 million units this year, while new home sales are projected at 690,000, NAR said. “All figures light up in 2021 with positive GDP, employment, housing starts and home sales,” Yun said, noting that in 2021, sales are forecast to rise to 5.35 million units for existing homes and 800,000 for new homes.

“The outlook has significantly improved, as new home sales are expected to be higher this year than last, and annual existing-home sales are now projected to be down by less than 10% — even after missing the spring buying season due to the pandemic lockdown,” Yun said.

Another look at COVID-19
The labor market has also been hit hard by the attempts to stop the spread of the coronavirus, as more than 20 million American workers have lost their jobs. An Economic Letter released Monday by the Federal Reserve Bank of San Francisco suggests the impact has been disproportional on those with less education.

Federal Reserve Board Chair Jerome Powell had touted gains by those with less education and in lower-paying jobs prior to the pandemic.

“While the labor market disruptions have affected workers in a wide set of industries and occupations, those without a college degree have experienced the most severe impact,” according to the Letter, written by Bank President Mary Daly and research associates in the Bank’s economic research department Shelby R. Buckman and Lily M. Seitelman.

“Addressing gaps in educational attainment will be important to creating better economic resiliency for individuals against future shocks,” they wrote. “The impact of the economic turmoil surrounding responses to COVID-19 presents an imperative to make access to learning more equitable. Increasing educational attainment can directly improve individuals’ work outcomes, both in and out of crises.”

The production index suggested “moderate expansion,” rising to positive 13.6 from negative 28.0, after “three months of record or near-record declines.”

New orders gained to positive 2.9, the first expansionary reading in four months, from negative 30.6 in May.

The growth rate of orders index narrowed to negative 5.8 from negative 30.8.

Looking ahead six months, both the company index and the general business activity index returned to positive territory at 16.2 and 19.7, respectively after May’s reading of negative 11.2 and negative 19.0.