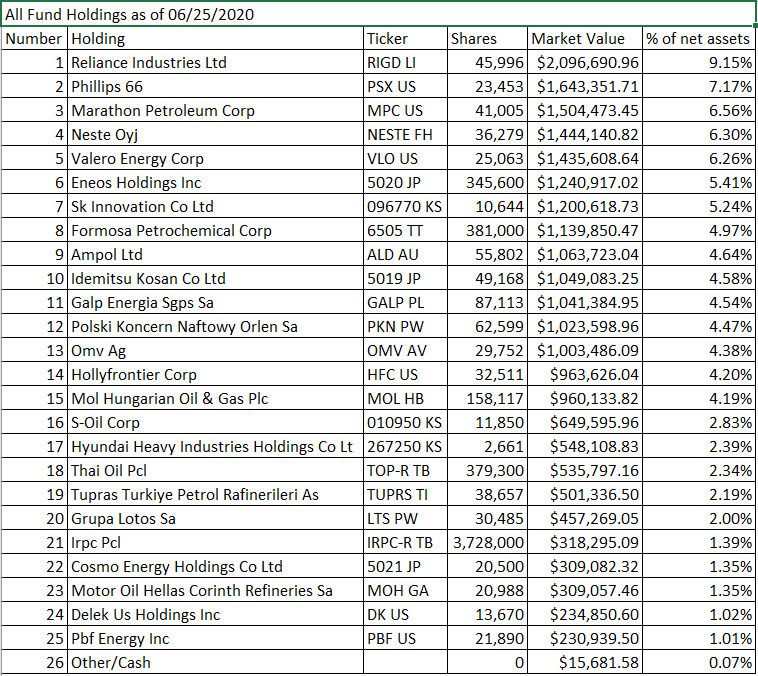 The VanEck Vectors Oil Refiners ETF (CRAK) is an investment instrument that provides investors with broad exposure to the global refining sector. Its holdings focus on merchant refiners rather than integrated oil & gas names that have large refining segments. U.S. refiners such as HollyFrontier (HFC), Marathon Petroleum (MPC), Phillips 66 (PSX), and Valero Energy (VLO) represent important components of the ETF (see table), but their influence is balanced by exposure to large foreign refiners such as India’s Reliance Industries and Finland’s Neste (OTCPK:NTOIF)(OTCPK:NTOIY). The ETF’s expense ratio of 0.6% is offset against a TTM yield of 1.9%. The ETF’s goal is to track the performance of the MVIS Global Oil Refiners Index via a full replication technique. 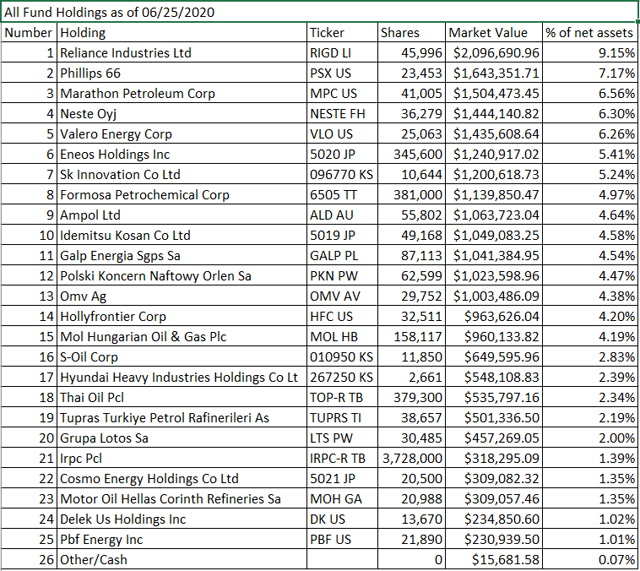 The benefits of CRAK’s geographic diversity have been on display amid this year’s immense turmoil in the refining sector. While the ETF’s share price is down by a substantial 26% YTD (see figure), it has strongly outperformed the share prices of its U.S. holdings HollyFrontier, Marathon Petroleum, Phillips 66, and Valero Energy over the same period. Its rallies have been comparatively muted, but its losses have been more limited during those periods in which investors have turned bearish on the refining sector.

This disconnect reflects the prevailing operating environment uncertainty that is affecting the different regions within the global refining sector. The start of the COVID-19 pandemic in Q1 2020 caused global demand for refined fuels to plummet as entire economies fell under lockdown orders and cross-border travel became difficult, if not outright impossible. The rapid spread of the coronavirus around the world left refining investors with few safe harbors in the sector as every major economy quickly experienced deep refined fuels demand disruption. 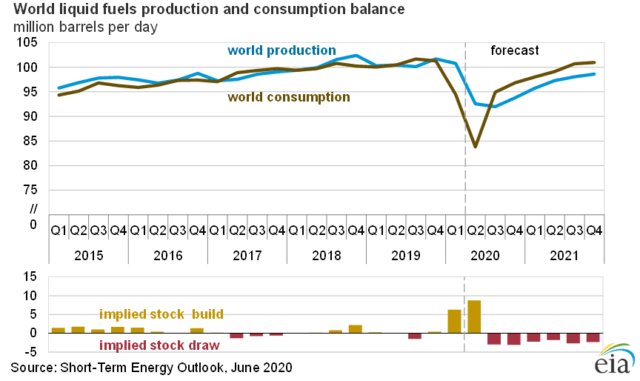 This is not to say that all countries have been equally impacted by the pandemic, however. China, where the virus was first reported, and Europe, which experienced some of the first national lockdowns, have largely managed to prevent the virus from running rampant. Almost all U.S. states also experienced lockdown orders, but their subsequent relaxation after the Memorial Day holiday has caused the daily new case rate to rapidly rebound in states such as California, Florida, and Texas. Even if lockdown orders are not reimposed, the reinstatement of travel restrictions and heightened fears of infection by consumers have kept U.S. refineries operating well below their normal summer levels.

The increased exposure of U.S. refineries to the coronavirus’s economic impacts has come to the forefront of investors’ concerns in recent weeks. June 8 marked the high-water point of the rally in U.S. refiners’ shares that began in late March. Major U.S. refiners’ share prices have lost up to twice as much ground as the CRAK ETF has since then (see figure). While the U.S. (and its refining sector) is far from the only country to continue to be affected by the pandemic, the greater comparative severity of its COVID-19 impacts is causing its refiners to fare worse than those in other countries.

Investors can expect CRAK to outperform U.S. merchant refiners so long as the pandemic’s effects continue to worsen. There is a rising probability that such a dynamic will persist in Q3 due to new information that has come to light regarding the coronavirus. First, the belief that the recent increase in U.S. coronavirus numbers is due to increased testing rather than an increased infection rate, as President Donald Trump implied at a recent campaign rally, can easily be dismissed based on positivity rate data that is published daily by researchers at Johns Hopkins University. The positivity rate reflects the percentage of COVID-19 tests that are positive. Increased testing would cause the positivity rate to remain flat or even decline if the spread of the coronavirus was not also accelerating. The U.S. positivity rate on a 7-day moving average basis has increased from 4.4% earlier this month to 6.6% as of June 28, which strongly suggests the growth in positive test numbers is due to factors other than increased testing.

Second, hopes that the virus’s growth would be hindered by warm summer temperatures, such as Mr. Trump suggested back in April, have been dashed by its accelerated spread since June began across the southern U.S. and many northern hemisphere countries in general. It increasingly appears that, rather than experience a pause before a potential second wave hits this winter, the coronavirus’s first wave is only getting stronger. This will be a headwind to demand for refined fuels even if economies continue to reopen, as the relaxation of lockdown orders will merely permit, but not require, the resumption of normal consumption trends that are unlikely to persist as the medical community continues to advocate for increased social distancing.

Third, the widespread assumption that infection with coronavirus confers long-term immunity has been called into serious question by recent research. The finding by scientists that up to 90% of the antibodies developed by the human body’s immune system during infection disappear within 2-3 months suggests that “herd immunity”, in which society develops a natural defense against the pandemic via the widespread presence of the antibodies throughout the population, cannot actually be achieved until a vaccine is distributed. If this research is confirmed, then people infected this summer will still be vulnerable to a subsequent infection in Q3 and Q4. A scenario in which the mass transmission of the virus enables economies to stage rapid and complete recoveries to pre-pandemic levels appears to be increasingly improbable as a result.

Taken together, these two recent findings regarding the coronavirus indicate that expectations for refined fuels demand and, by extension, refining margins will need to be revised lower as Q3 begins. This is already happening in the U.S. refining sector, with three of the four names mentioned above having seen their consensus 2020 EBITDA estimates revised sharply lower since the refining rally began in late March (see figure). Only Phillips 66 has seen its consensus estimate rise over the same period, and then mainly because of a large Q1 earnings beat that it reported on May 1 rather than due to any improvement to its operating outlook.

Investors can expect refiners’ share prices to remain under pressure in Q3 as the coronavirus’s spread continues to accelerate worldwide. Those investors who want to hedge against the possibility that conditions undergo a rapid improvement in Q3 due to as-yet unforeseen reasons by remaining long the refining sector should consider CRAK as an alternative, however. The ETF’s geographic diversity can cause its share price to lag those of U.S. refiners when the latter’s operating conditions improve, but it also offers an important degree of security when U.S. conditions deteriorate for the same reason. Given the immense uncertainty that currently exists in the refining sector’s outlook, CRAK’s geographic diversification has value.

Revenue vs. Income: What’s the Difference?
Existing Leases After The Pandemic: Considerations For Property Operators
How To Diversify Your Real Estate Portfolio
I Scream. You Scream. The Meltdown At The Museum Of Ice Cream
For markets in week ahead, investors will gauge the severity of the coronavirus spread