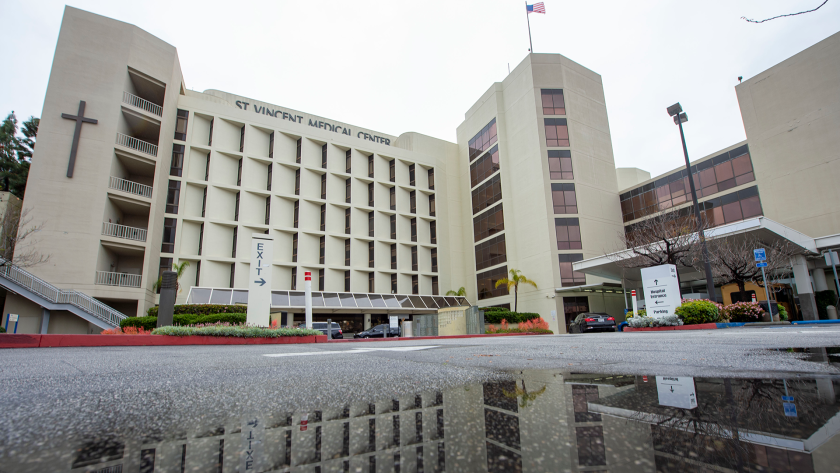 The coronavirus pandemic changed the course of the bankruptcy proceedings for a failing non-profit hospital chain.

Included on a list of 15 properties he secured are two Verity Health System hospitals — one of which had closed — that the state is leasing for three months at a cost of $30 million. The agreement was approved by the U.S. Bankruptcy Court on March 20.

The six-hospital chain filed for Chapter 11 in 2018. It has nearly a half billion dollars in bond debt embroiled in the bankruptcy.

It sold its two Santa Clara County hospitals to the county government in 2018.

Verity appeared to have a buyer for its remaining hospitals in late 2019, but the deal with KPC Group failed to close by the end of December.

The state government’s coronavirus response will add some cash to the bankrupt operation.

California is leasing Seton Medical Center in Daly City, which was on the verge of closing, and St. Vincent Medical Center in Los Angeles, which had closed in January. The plan Newsom announced called for up to 120 COVID-19 patients at Seton and 366 at the former St. Vincent, which has reopened as the Los Angeles Surge Hospital managed by two other nonprofit hospital chains.

The Seton Medical Center accounted for roughly 29% of the operating losses of the entire Verity Health System, although the hospital accounted for only 17% of the net patient revenue, according to court filings.

“The hospital has consistently lost money for many years due to, among other things, unfavorable payor contracts, rising costs of providing health care, high pension obligations and certain requirements imposed on the hospital by the California Attorney General,” wrote Verity’s attorneys, Samuel Maizel, Tania Moyron, and Nicholas Koffroth, all of law firm Dentons U.S. LLP in a March 29 court filing.

The chain has struggled for years in California markets dominated by operators with greater economies of scale and negotiating leverage with insurers.

They continued to struggle despite an infusion of cash put into the system by hedge fund BlueMountain, which began managing the non-profit system after a 2016 deal that renamed the chain from Daughters of Charity to Verity Health.

Prime Healthcare, which in 2015 had been poised to buy all six hospitals from Daughters of Charity before refusing to accept conditions then-California Attorney General Kamala Harris’ attached to the for-profit conversion, struck an agreement April 9 with Verity to purchase St. Francis Medical Center in Lynwood for a net consideration of over $350 million, including a $200 million base price and $15 million in payroll and benefits for staff.

Prime has committed to investing $47 million in St. Francis to fund capital improvements, including technology and system upgrades. It also agreed to make employment offers to most of the hospitals’ employees.

“The totality of conditions imposed by the then attorney general were too onerous to sustain a successful future for all six hospitals,” said Sunny Batia, Prime’s region chief executive officer. “Our mission at Prime Healthcare is to save hospitals and save lives, and that mission aligns with St. Francis Medical Center’s mission and we are honored to be chosen to continue its legacy.”

Prime agreed to honor Attorney General Xavier Becerra’s and the bankruptcy court’s conditions recently issued for the sale and to preserve the hospital, trauma care, service lines, charity commitments and community benefit programs, according to the hospital system.

“St. Francis is a critical part of Southern California’s healthcare safety net, with vital services such as trauma care and a family life center that are indispensable to the community and, among other services, must be preserved,” Batia said. “As one of the nation’s largest health systems, Prime has the experience and manpower to support St. Francis through this current global crisis and help them emerge stronger than ever.

AHMC, which operates seven acute care facilities in southern California, was founded by family practitioner Dr. Jonathan Wu, who is chief executive officer and chairman of the board.

AHMC “looks forward to ensuring that the community continues to be well-served by the high-quality, accessible medical care that Seton and Seton Coastside provide,” said Eric Tuckman, spokesperson for AHMC. “As the state healthcare system faces mounting challenges in the battle against COVID-19, investing in community hospitals — and the hospital’s physicians, nurses and employees, is more important now than ever.”

Since the petition date, Seton Medical Center’s share of the system operating losses has required the debtors’ estates to fund roughly $5 million of working capital per month, including corporate overhead allocations. The debtors project continuing operating losses at the hospital.

“Based on Seton’s performance, the debtors concluded that a sale to a buyer with experience revitalizing distressed hospitals offered the best alternative to maintain the Seton Facilities as operating hospitals,” Verity’s attorneys said in a March 29 filing.

The hospitals in the system are jointly obligated with affiliates on $461.4 million in outstanding secured debt consisting of: $259.4 million in outstanding tax exempt revenue bonds, Series 2005 A, G and H issued by the California Statewide Community Development Authority, which loaned the proceeds to certain debtors to provide funds for capital improvements and to refinance certain tax exempt bonds previously issued in 2001 by Daughters of Charity Health System, $202 million outstanding tax exempt revenue notes, Series 2015, A, B, C, and D and Series 2017 issued by the California Public Finance Authority, according to a March 29 bankruptcy court filing.

In May 2017, the California Statewide Communities Development Authority issued $20 million of limited tax exempt bonds, pursuant to the CaliforniaFIRST Clean Fund Program in five series, all with the same maturity date of Sept. 2, 2047, as the conduit issuer for the benefit and obligation of Seton.

The purpose of the bond funding was to assist with clean energy and seismic construction efforts of Seton and secured by Seton’s voluntary agreement to special tax assessments by Daly City. No other debtor in the hospital system is liable for repayment of the Clean Fund Bonds, which have a 6.4% interest rate. The special assessment runs for a period of 30 years or the early full defeasement of the Clean Fund Bonds.

In September 2017, the CSDDA issued an additional $20 million of limited tax exempt bonds in a single series, also pursuant to the CaliforniaFIRST program, and also for the purpose of assisting with clean energy and seismic improvement construction at Seton hospital, with similar terms and a 6.45% interest rate.