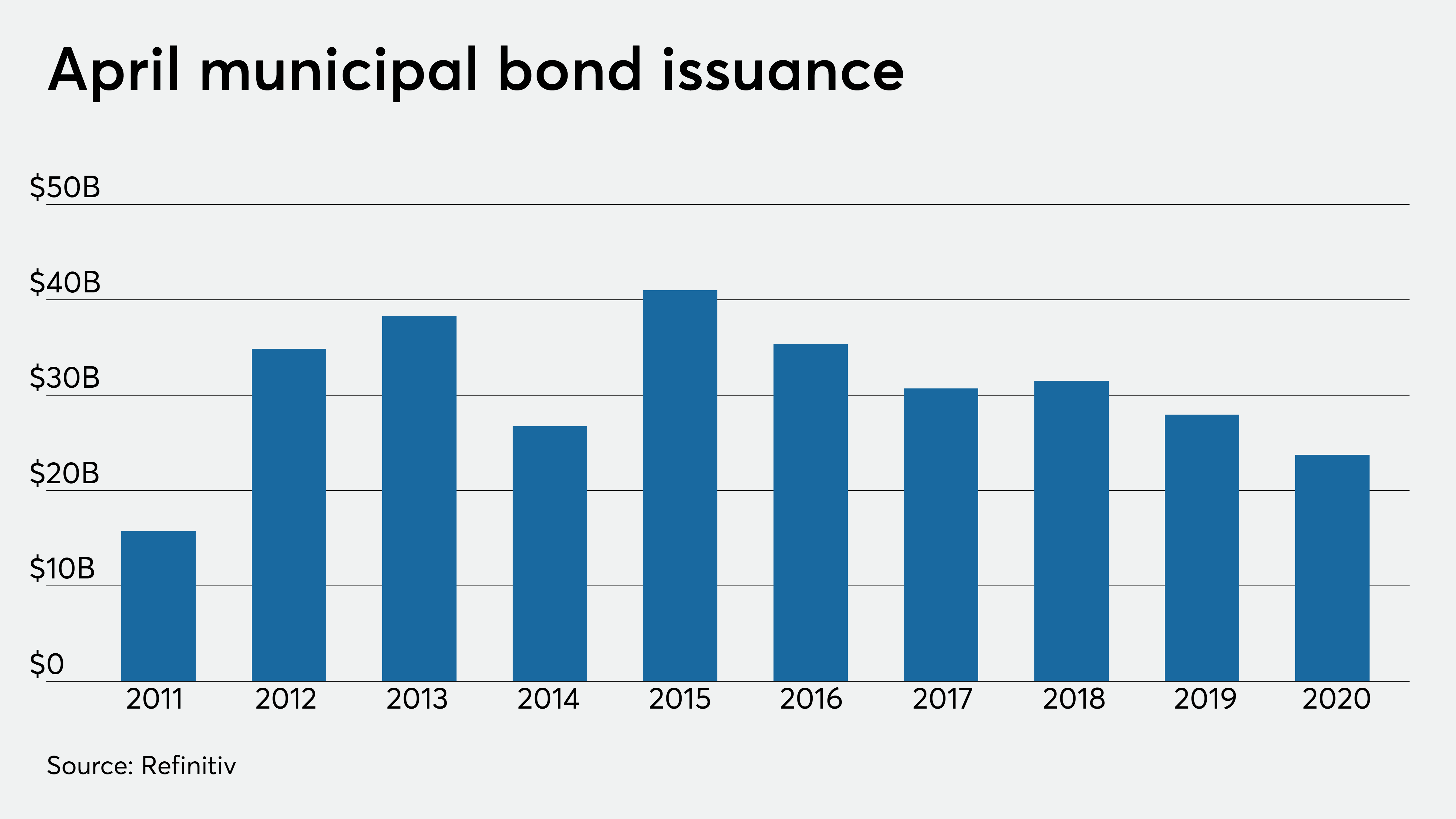 Volatility from the pandemic has caused erratic swings in benchmark yields and an environment in which issuers and dealers alike have struggled to bring new deals to market.

“We were off this month by roughly a week and half of issuance and I think that is pretty good, considering what has happened,” said Peter Block, managing director of credit and market strategy at Ramirez and company.

The sharp drop in April volume can be ascribed to the outsized concern over the COVID-19 pandemic and the related economic closure, according to Jeffrey Lipton, managing director of municipal research and strategy and municipal capital markets at Oppenheimer & Co.

“With the building concern over credit, many issuers chose to postpone or even cancel their deals, especially if they were not of a critical nature,” he said. “We also think that issuer capital plans were and will continue to be reviewed against the backdrop of heightened economic, budgetary, and credit uncertainty.”

Lipton added that the market should prepare for a backlog in issuance should the economy begin to come back on line sooner than expected with credit not materially impacted.

“As the market dramatically sold off in March, mutual funds were actively liquidating holdings to raise cash and meet redemption needs, with higher quality credits being the first to go,” Lipton said. “During this time, price discovery was severely challenged as panic selling ensued. By the end of March, the fear and panic dumping subsided and professional investors focused more on the relative value proposition as more reasonable clearing levels and better price discovery moved into sight, largely thanks to Fed and Congressional intervention.”

Year-to-date, the market is still on a better pace than last year. So far in 2020 munis have totaled $116.61 billion, slightly more than the $107.34 billion of issuance that were issued at this point last year.

“YTD we are still up issuance wise, all because of taxables that is continuing to prop up issuance,” Block said.

The pandemic effects caused municipal benchmark yields to see-saw this month, as the market is trying to stabilize. The other big impact the COVID-19 crisis has had on the market, is on credit.

“Right now, everyone is just being cautious,” Block said. “Munis don’t do well with general credit uncertainty, unlike the corporate market. The concern is necessarily about issuers defaulting but more about credit downgrades.”

Taxable bond volume was up exponentially to $4.30 billion from $1.94 billion in 2019. Before the COVID19 pandemic, the majority of taxable deals that have been coming are being used as a refunding or advance refunding of tax-exempt debt.

Three types of issuers increased levels from a year ago, while issuance by the rest of the others declined at least 17.2%. Issuance from counties and parishes’ rose 114.8% to $2.47 billion from $1.15 billion, districts rose to $7.99 billion from $5.18 billion and colleges and universities increased to $1 billion from $799.4 million.

California was back atop the list of state total muni bond issuance rankings so far this year. All issuers in the Golden State have accounted for $17.41 billion. Texas is second with $14.99 billion, New York is third with $10.65 billion, Ohio is fourth with $10.37 billion and Massachusetts rounds out the top five with $4.41 billion.

Lipton added that although the primary market came back to life and extended the better tone throughout April, retail was largely on the sidelines and institutional accounts grew far more discerning over credit.

“The supply/demand balance seemed to work in April, even though weekly calendars were atypically low,” he said. “New–issue volume grew less predictable and so market technicals became a less reliable barometer of price movement. Still, certain issuers opted to access the capital market and take advantage of low interest rates and there was demand for well-known, high-quality and resilient names.”

“Treasuries became the haven choice du jour, while muni credit is no longer getting a free pass as COVID-19 and the economic suspension upended the public finance world,” he said. “Furthermore, there was a period of time where the market saw outsized intraday MMD price adjustments in either direction.”

Going forward, Block suspects that the huge backlog of deals will start coming, once the market stabilizes.

“We are in the process of stabilizing right now, and that is being helped by the next round of aid for state and local governments’ and how it relates to the psychology of the issuers,” Block said. “We just need to wait for the issuers’comfort to get better, particularly for refundings.”

He added that he believes the issuance will get lumpy, though “we will most likely see $40 billion to $50 billion issuance months as we wind our way towards the end of the year,” Block said. “We should end up with normal-looking end year volume, around $350 billion of so.”

Lipton believes that for now, credit quality has supplanted market technicals as the leading decisive investment consideration with a selective eye parsing between those sectors expected to demonstrate greater resiliency and those that may be more susceptible to sharp credit erosion and more uncertain recovery, especially now that the rating agencies are taking action.

“Throughout the remainder of the year, we can expect volume to lag traditional expectations, and again, this will be driven by public health policy status, the impact of Fed and congressional intervention, and the degree of credit erosion and uncertainty,” Lipton said. “We expect volatility to remain in place, yet we do not necessarily envision the upheaval seen in March. If all touchpoints move in a positive direction, we can see better supply in May and beyond, and so we are cautiously optimistic.”