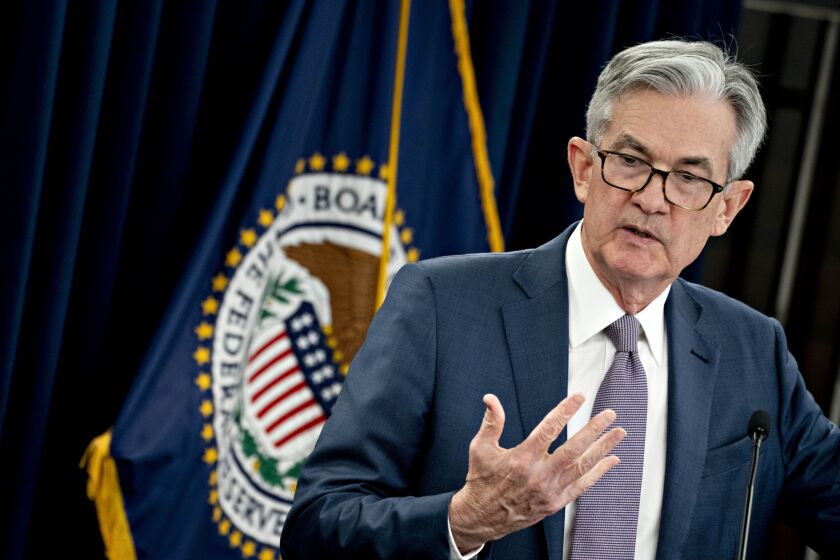 As COVID-19 continues sap the strength of the U.S. economy, the Federal Reserve held the line on interest rates on Wednesday.

The Federal Open Market Committee voted maintain the target range for the federal funds rate at zero to 0.25%.

“The committee expects to maintain this target range until it is confident that the economy has weathered recent events and is on track to achieve its maximum employment and price stability goals,” the FOMC said.

“The virus and the measures taken to protect public health are inducing sharp declines in economic activity and a surge in job losses. Weaker demand and significantly lower oil prices are holding down consumer price inflation,” the FOMC said. “The disruptions to economic activity here and abroad have significantly affected financial conditions and have impaired the flow of credit to U.S. households and businesses.”

The pandemic will weigh heavily on economic activity, employment and inflation in the near term, the FOMC said, and will pose considerable risks to the economic outlook over the medium term.

The FOMC said it will continue to monitor economic data and use any tools at its disposal to support the economy.

“In determining the timing and size of future adjustments to the stance of monetary policy, the committee will assess realized and expected economic conditions relative to its maximum employment objective and its symmetric 2% inflation objective,” the FOMC said.

To support the flow of credit to households and businesses, the Fed said it will continue to purchase Treasury securities and agency residential and commercial mortgage-backed securities. The Fed’s Open Market Desk will continue to offer large-scale overnight and term repurchase agreement operations.

So far this year, the Fed has taken numerous actions to keep the economy from imploding.

In March, the Fed cut rates twice, for a total of 150 basis points, and dropped the discount rate by the same amount.

Also last month, the Fed started buying commercial paper and, in an operation headed by the Boston Fed, as reported by CNBC, bought municipal debt.

This month’s $2.3 trillion COVID-19 package from the federal government included a $500 billion program to allow the Fed to buy short-term debt from state and municipal governments.

The Fed expanded its newly created Money Market Mutual Fund Liquidity Facility. The central bank originally planned to purchase short-term muni debt from states and counties with a population of at least two million residents and cities with a population of at least 1 million residents. The short-term muni note purchasing program now covers smaller issuers, counties of 500,000 or more and cities of at least 250,000.

“We think the Fed has done a phenomenal job rolling out the 2008 ready-made playbook and more since this crisis began,” said Brett Ewing, chief market strategist at First Franklin Financial Services. “They have been able to steady the corporate and municipal bond routs without even having to actually buy the bonds thus far, which is ideal.”

“We believe that the amount of money being pumped into the economy through unemployment programs and the PPP [paycheck protection program] will be enough stimulant to lead to better numbers in the back half of the year,” said Ewing.

GDP takes a dive in Q1
Real gross domestic product fell 4.8% in the first quarter of 2020, according to the advance estimate released by the Labor Department on Wednesday.

Economists surveyed by IFR Markets had expected a decline of 4.0%.

“The decline in first quarter GDP was, in part, due to the response to the spread of COVID-19, as governments issued ‘stay-at-home’ orders in March,” the Labor Department said in a statement. “This led to rapid changes in demand, as businesses and schools switched to remote work or canceled operations, and consumers canceled, restricted, or redirected their spending.”

“Economic expansions do not die of old age, but clearly they do get sick,” said Dr. Sonal Desai, CIO of Franklin Templeton Fixed Income. “This was the weakest quarterly GDP number since the Global Financial Crisis and Q2 will be much worse, inviting comparisons with both the GFC and the Great Depression. But this is a very different recession, triggered by the sudden lockdown measures rather than any fundamental weakness in the economy or financial system.”

The decrease in PCE reflected decreases in services, led by health care, and goods, led by motor vehicles and parts.

“The full economic effects of the COVID-19 pandemic cannot be quantified in the GDP estimate for the first quarter of 2020 because the impacts are generally embedded in source data and cannot be separately identified,” Labor said.

Desai said how fast economic activity is restarted will be key to the speed and strength of the recovery.

“If we can reopen the economy between May and June, the strength of the fiscal and monetary stimulus can still fuel a robust, V-shaped recovery, as we showed in our recent whitepaper,” Desai said. “If the lockdown lasts much longer, however, bankruptcies will likely rise, temporary unemployment will become permanent and the recovery will be much weaker and slower.”

Economists polled by IFR Markets had expected a drop of 10.0%.

Each of the four major regions in the U.S. saw drops in month-over-month contract activity and year-over-year pending home sales transactions.

Next year brings more focus on financial disclosures
Bitcoin’s 10th Birthday: Was the Nakamoto White Paper Right?
A look at stock market history around elections and whether politics really matter
Fitch adds to downgrade pileup with New York MTA’s options limited
Cramer on the sell-off: ‘It’s very hard to buy a lot of stocks when you see these’ case numbers