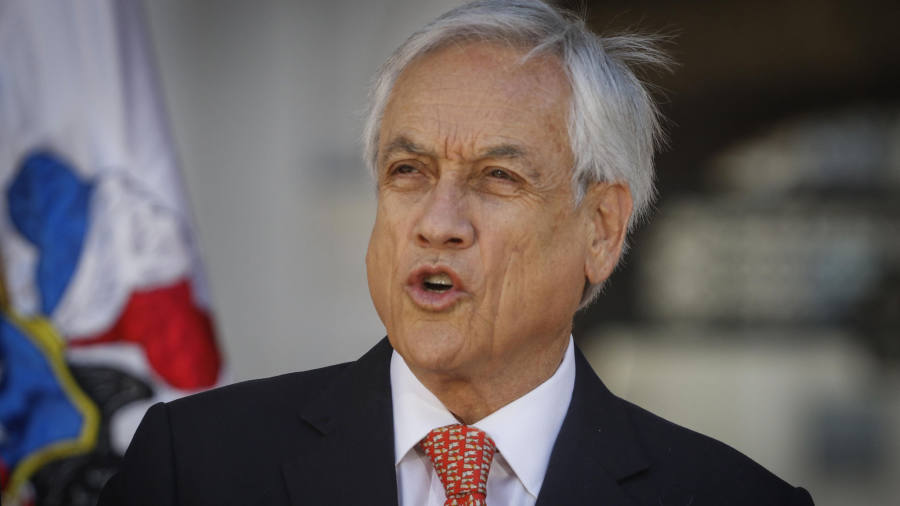 FT subscribers can click here to receive FirstFT every day by email.

President Sebastián Piñera announced on Wednesday that Chile would no longer host next month’s summit of leaders from the Asia-Pacific region, disrupting plans by Donald Trump and Xi Jinping to sign a trade war truce at the gathering.

The Chilean president was forced to cancel the Asia-Pacific Economic Cooperation summit, due to be held in mid-November, because of continuing protests against inequality in one of Latin America’s richest countries — the worst civil unrest in Chile since the dictatorship of General Augusto Pinochet that ended in 1990.

Chile has also pulled out of hosting a UN climate change conference, COP25, which was due to be held in December.

Mr Trump and Mr Xi had focused on the Apec summit in Santiago as the place where they could sign a ceasefire in their long-running trade war, with China agreeing to beef up its agricultural purchases in exchange for a reprieve from higher US tariffs. Officials from both countries were also negotiating limited agreements on intellectual property and currency as part of the package.

Mr Piñera’s decision to cancel the conference appeared to catch the White House off guard. Some familiar with the US-China trade talks, though, said the two sides were considering alternate locations as the protests in Chile escalated. (FT, Bloomberg)

Fed delivers third rate cut The US Federal Reserve dropped its policy rate by 25 basis points on Wednesday but signalled that it was finished with cutting for now, pending clearer economic data. The news came hours after a report that US economic growth had cooled slightly in the third quarter to reach the slowest pace of 2019. Analysis shows it is consumers and government spending driving US expansion, while business investment trails. (FT, Wall Street Journal)

US nears settlement in 1MDB case Jho Low, the Malaysian financier at the centre of the 1MDB scandal, has struck a deal with the US Department of Justice that would resolve a number of civil forfeiture lawsuits targeting assets worth almost $1bn, according to a person familiar with the matter. (FT)

Grenfell fire inquiry report released Martin Moore-Bick, the chair of a public inquiry into the 2017 Grenfell Tower disaster in London, urged in a letter to Boris Johnson, UK prime minister, that his recommendations on fire safety be implemented “without delay” as he released findings from the first phase of the probe into the fire at the 24-story social housing block that killed 72 people. Victims’ families, meanwhile, demanded the resignation of London Fire Brigade commissioner Dany Cotton. (FT, BBC News)

Boeing tried to limit pilot training for 737 Max The aerospace company pushed to limit expensive training for pilots of its 737 Max jet, despite acknowledging that a failure of its anti-stall system could be “catastrophic” if they did not respond in 10 seconds, according to new documents released by Congress on Wednesday. (FT)

US lawmakers support Turkish sanctions over Syria offensive The US House of Representatives has overwhelmingly passed a bill threatening fresh sanctions on Turkey to punish it for its offensive into north-east Syria, signalling continuing unhappiness with Ankara. A meeting on a new Syrian constitution, a key proposal from Russia, began in Geneva on Wednesday. Plus, an interactive look at how the new Syria took shape. (FT, The Guardian, NYT)

BBC ‘deliberately misled’ female employees, union claims Giving evidence in a landmark gender pay case, Britain’s main journalism union claimed that the broadcaster “deliberately misled” women at the company over their salaries. The National Union of Journalists is backing Newswatch presenter Samira Ahmed, who has taken the BBC to the tribunal over claims that she was paid less than colleague Jeremy Vine. (FT)

Bad news for WeWork Bill Ackman sees a risk of SoftBank having to write off all of its investment in WeWork, he told the Robin Hood investor conference in New York on Tuesday. A split screen image for you: on the same day, Masayoshi Son, the chief executive of SoftBank, spoke to a nearly empty room at “Davos in the Desert”. (FT, Bloomberg)

House of Commons speaker steps down John Bercow will step down on Thursday. He has been unusually interventionist in the role over the past decade and has become a well-known figure, especially since helping parliament to steer the course of Britain’s exit from the EU. (FT)

Japanese Central Bank meeting On Thursday, many economists now expect the Bank of Japan to keep its monetary policy on hold, or else make only a relatively minor adjustment, despite hinting at its previous meeting that it might take action this time round. (FT)

Keep up with the important business, economic and political stories in the coming days with the FT’s Week Ahead. Click to subscribe here. And don’t miss our FT News Briefing audio show — a short daily rundown of the top global stories.

California wildfires and the debate over stakeholder capitalism, a little-noticed flood risk in the UK and asset managers see big growth in their environmental, social and governance holdings. This week’s edition of the Moral Money newsletter is out. Sign up here to receive our weekly email covering the ESG investment industry.

What else we’re reading

Inside the WhatsApp hack When Faustin Rukundo’s phone started to get WhatsApp calls at odd times he had reason to be suspicious. Mr Rukundo, a British citizen, is a member of a Rwandan opposition group in exile. He’s one of a considerable number of Rwandans, identified by WhatsApp, who are believed tohave been targeted via an app vulnerability that allowed customers of theIsrael-based group NSO to inject a spyware program through the app’s voice-call function. The FT interviewed six people with ties to Rwanda who have recently been informed of the attacks. (FT)

Laos’s Belt and Road project sparks questions Why does one of Asia’s poorest countries need a China-built high-speed rail line? The project costs a fortune and is yet another example of the big problems associated with Chinese President Xi Jinping’s flagship foreign policy project. (FT)

On the ground with Trump’s foot soldiers In Kenosha County, Wisconsin, volunteers are being trained by Trump party organisers to prepare for a get-out-the-vote campaign in early November. In addition to the older, blue-collar white men typically thought of as Mr Trump’s most devoted supporters, more than a quarter of the people attending the session were young, a few were minorities and college graduates, and more than half were women. Our reporter Patti Waldmeir joined them. (FT)

The trouble with chocolate A decade after chocolate makers vowed to switch to sustainable cocoa to reduce deforestation, a major contributor of climate change, the problem has only got worse. Elsewhere, revised projections of rising sea levels suggest that cities including Shanghai, Bangkok and Ho Chi Minh City could be all but erased. (WaPo, NYT)

How Germany avoided becoming Japan What are the euro’s benefits to Germany, asks the FT’s Martin Wolf. An answer comes from a comparison: Japan. Both were reborn after the second world war as US allies and dynamic manufacturing exporters. Germany, however, has a stable and competitive real exchange rate. (FT)

A diamond is not forever LVMH’s $14.5bn bid for Tiffany shows that the luxury jewellery business is becoming more similar to fashion, John Gapper writes, with power passing from gem miners to digital marketers. (FT)

Chinese savings look increasingly like those of Americans The Chinese have been known for putting away much more of their incomes than Americans do. Now, the opposite is becoming true. While Chinese families still save about five times more income than American families, their overall savings rate is decreasing. Here’s a look at the trend in 17 charts. (Wall Street Journal)

Fear of an Indian shadow bank contagion Since its launch at the turn of the millennium, Indiabulls has become one of the country’s most prominent financial groups. But its success has been overshadowed by a growing crisis in India’s shadow banks, whose problems investors and analysts increasingly fear could spread among conventional banks and real estate companies and cause a broader financial crisis. (FT)

Video of the day

The scariest charts in global finance Laura Frost of M&G Investments and FT markets editor Katie Martin look at what investors should be afraid of this Halloween, from negatively yielding corporate debt to trade war fatigue.