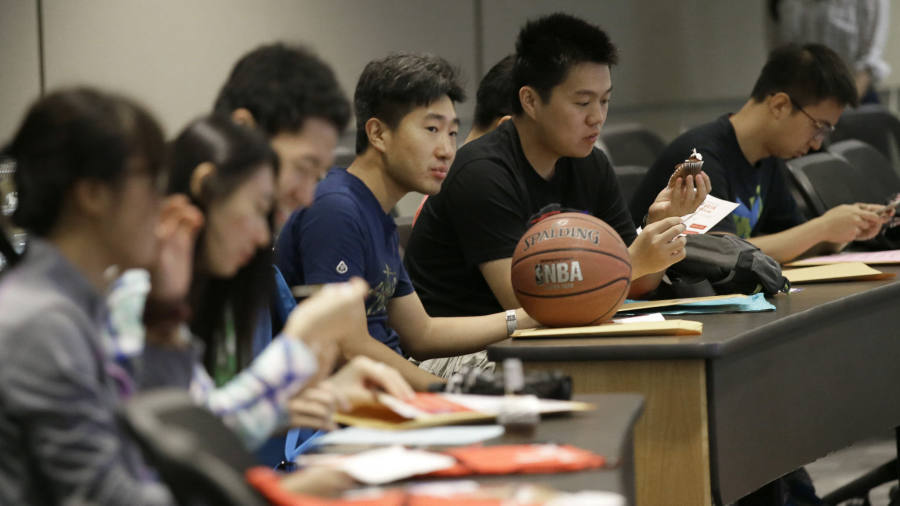 Stanford University’s Graduate School of Business has suffered a 6 per cent fall in applications for its MBA course in part because anti-immigrant rhetoric and US-China trade tensions are driving foreign students away from top US universities.

The California university, which ranked number one in the Financial Times global MBA survey, is the latest to admit a decline in interest for the two-year full-time course that started this month. All of the top 10 US schools on the FT’s list have now suffered application declines in the last two years.

The tightening of US visa rules for overseas students in recent years has discouraged many of those who would like to work locally after graduation. MBA programme heads fear that this has been made worse by the trade battle with China; the country is one of the biggest sources of overseas students for US business schools.

“Immigration and visa issues are just more complicated now,” Paul Oyer, Stanford’s dean of MBA programmes, told the Financial Times. He added that an “incredibly hot” jobs market in the US had also made potential applicants reluctant to miss out on opportunities for promotion by returning to full-time study.

Hardest hit this year was Tuck School of Business at Dartmouth College. Until now it had managed to maintain its numbers but applications for this year’s intake were down 22.5 per cent.

The University of Chicago’s Booth School of Business is the only institution among the so-called “magnificent seven” of top US institutions to record a rise this year, up 3.4 per cent. But this was still down on two years ago for the school, which suffered an 8.2 per cent drop in 2018.

Negative headlines about foreign students and trade disputes were discouraging various overseas applicants, but particularly those from China and India, according to Bill Boulding, dean of Duke University’s Fuqua School of Business, whose applications fell 14.6 per cent this year, said.

“China is a huge market for business schools,” he said. “We need to keep an open line of communication that creates an opportunity for us to move to a better place, not this negative cycle.”

Business school heads worry that declining demand will dilute the quality of candidates for employers that come to campuses to recruit after graduation. Rather than damage the overall school brand in this way, some deans have closed their MBA programmes, most notably Iowa’s Tippie School of Business, which was ranked 84th in the world by the FT when it decided to shut its full-time course in 2017.

“I wouldn’t be surprised if we saw more closures,” Mr Oyer said, adding that he had heard “a big 10 school” moot the idea recently. “They cannot get the numbers,” Mr Oyer said.

Mr Boulding also predicted further MBA course closures, but not whole institutions, arguing that business schools were adjusting their course offerings to make them better suited to people who would rather study more flexibly, either online or part time.

Declining demand could also be seen as an opportunity for those still interested in getting an MBA because the intense competition for places at leading institutions has reduced somewhat.

There are also signs that schools are admitting a greater diversity of students with both Stanford and Wharton, whose overall applications fell 5.4 per cent, recording record percentages of female students in their current intakes.

The TAO: A New Framework to Power the Web
How To Use Reverse Wholesaling For Your Real Estate Venture
Three Ways Hotels Can Pivot To Attract Remote Workers
Covid-19’s Impact On New Home Purchases And Designs
Cramer: DOJ’s antitrust lawsuit against Google takes parent Alphabet from ‘buy to strong buy’