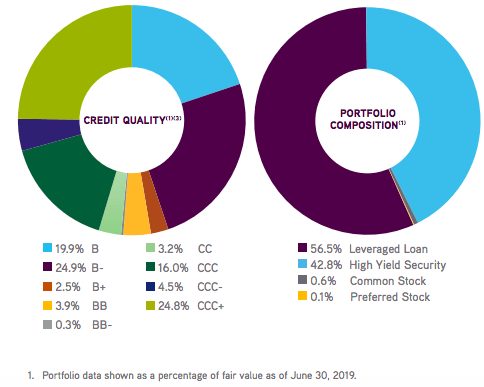 The KKR Opportunities Fund (KIO) is managed by Chris Sheldon and has been since the fund’s inception in July 2013. Mr. Sheldon has been with the storied firm since 2004. 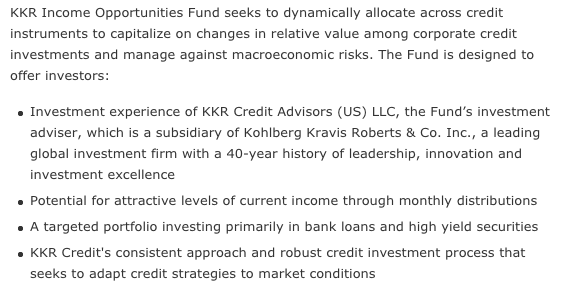 We’ll get to a breakdown of holdings in more detail, but what the fund principally invests in is a mix of leveraged loans and high-yield fixed income. Equity makes up only a small portion of holdings (under 1%), and capital appreciation is of secondary importance.

What drives the fund’s mission is (hopefully) mispriced securities that offer an attractive yield. According to the June 30th Fund Fact Sheet (link at the bottom of this article), the average yield-to-maturity on the fund’s holdings was 12.45%.

Readers can likely infer that with an average yield north of 12%, KIO is not active in the investment-grade corporate space.

That said, it wouldn’t be quite correct to think of KIO as a “junk bond fund”. True, at the end of Q2 high yield makes up over 40% of fund assets. But leveraged loans comprised the lion’s share.

The investing public is likely more familiar with junk bonds than leveraged loans. Investopedia has a decent primer on the sector available here. Summary bullets from the investment education site are as follows:

Many leveraged loans (sometimes called “bank loans”) work on a floating rate basis, generally LIBOR plus a healthy premium to compensate investors for the risk and potential lack of liquidity. Of the 130 or so total holdings reported in the April 30th Semi-Annual report, 70 carried floating terms of some version of LIBOR (generally one or three-month) combined with a spread.

Floating-rate debt generally reduces a bond fund’s duration, or sensitivity to interest rate movements. According to the fact sheet, the average maturity on its debt holdings is just over five years, with a duration of around 2.5x.

KIO also carries a significant allocation to more traditional junk bonds, with fixed rates and typically shorter maturity periods – 2028 was the latest maturity that I observed on the semi-annual report (available at the end of this piece).

Since the fund’s inception in 2013, KIO has consistently traded at a discount to its NAV (ticker XKIOX), which has fallen considerably since late 2017 and closer in-line with the market price.

I tend to not like this kind of narrative for a discount reduction. In theory, there doesn’t need to be much of a difference between price catching up to NAV as opposed to NAV sinking toward the price. End of day, investors look at the action based on their own philosophy, and I leave it to the reader to determine whether or not the action is concerning. 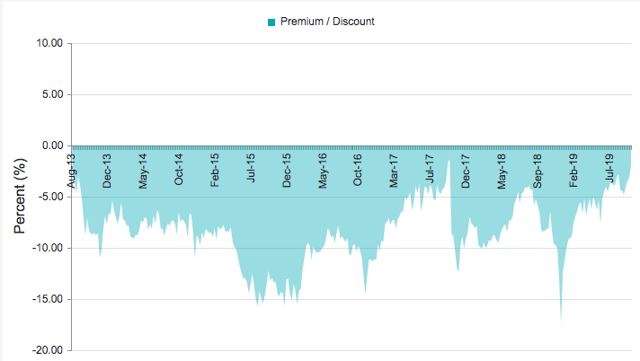 The current discount to NAV is about as low as it has ever been. Readers should take note that sharp reversals have occurred in the past. Having said that, it really is true that “past performance is no guarantee of future results…”.

Frequently readers will post with statements such as “I’m waiting for the discount to increase.” I do think that the premium/discount can legitimately come into play, but I believe that it is more important to understand the dynamics of the fund itself.

US Treasury yields (10YR UST in red above) have fallen quite a bit over the last year, even when one takes into account the recent bounce.

Junk spreads (in blue above), however, are modestly higher than they were a year ago, though still at the lower end of their 10-year range. It’s the large spikes such as the one that occurred in late 2015 and into 2016 that investors should keep on their radar from a risk management perspective.

KIO makes use of borrowing to enhance returns; about 30% of total assets were purchased with debt financing.

There is a fairly real danger if credit spreads were to blow out again that KIO would be forced to liquidate some of its rather illiquid holdings, more or less a margin call. In light of the relatively low discount to NAV, this could serve as a double whammy for investors who find themselves holding the shares should this scenario come to pass. 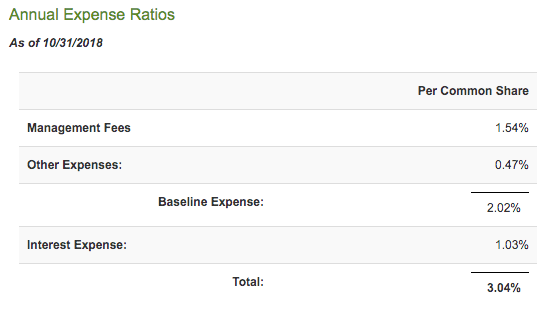 The KKR Income Opportunities Fund charges fees that I would describe as being on the high side. Granted there are investors that take the view that the fees are justified by gaining access to cheap leverage, and I think that argument deserves to be heard.

But 2.02% as a baseline expense is a high enough price tag to make some balk.

With the exception of a few end-of-year special distributions (not at all uncommon for closed-end funds), KIO has pretty consistently paid out a monthly dividend of $.125/share, or $1.50 a year. This represents about a 9.5% return on the current share price. 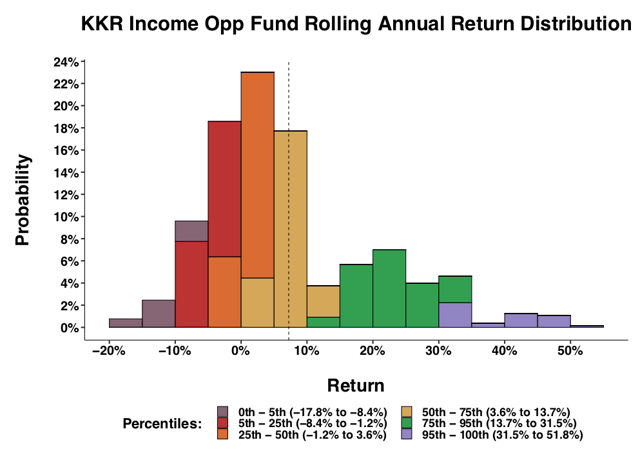 It’s easy to get excited about juicy yields in an environment deprived of safe income. As such, I like to look at the total return distribution on funds to get a sense of “what the ride has been like”.

On a rolling annual basis, the median total return since inception rests at around 3.6%, while the total annualized return has been considerably higher – 6.55%. We see that the long right tail on the distribution skews the mean away from the median.

Lower-quartile returns for KIO stand at -1.2% on a rolling annual basis. Past can never serve as prologue, but the profile hints at some pretty effective risk management.

KIO is a fund that deserves consideration from investors. There are very real risk factors, especially when one takes into account the low liquidity of holdings coupled with leveraged ownership.

The high fees, falling NAV, and shrinking discount all conspire to prevent me from putting KIO on my immediate buy list. That said, I admire the manager’s capacity to keep risk contained, and I like the approach of blending leveraged loans alongside more traditional junk instruments. The fund will certainly remain on my watch list, and I’ll continue to analyze it.

I’d appreciate comments from readers. What do you like – or dislike – about KIO? I very much enjoy when readers share their stories and strategies, and invite you to do so below.